Another way of looking at Plasencia

People in Plasencia are very proud of their medieval and renaissance heritage, the main protagonists of the city. But the weight of the medieval architecture often makes modern, residential buildings unnoticed. "We know the heritage buildings, but we do not know the normal residential buildings, in which we have seen all our lives". Let’s see how locals engaged with their own heritage in Plasencia!

Plasencia is overflowing with History. A history that always crosses our ways when turning at a corner: a church, a convent or a manor house always appear telling stories about the past with their solid stones. In the shadow of historic buildings there are many modern, mainly residential buildings, in some cases with outstanding architectural value. Buildings that contain significant part of our history, especially with regards to the experiences of locals who have inhabited them over the time. "We know the heritage buildings, but we do not know the normal residential buildings, which we have seen all our lives", explains Salud Serrano, one of the participants of the study visit organized within the Urbact Come In! network.

With the Come in! project, our city tries to transfer the experience of ‘Budapest100’, a festival in which residential buildings open their doors for a weekend and with which the Hungarian capital promotes every year the enhancement of heritage, the reinforcement of links of belonging and citizen participation. To try this, in 2019 an Urban Local Group was formed at the initiative of the City Council that ended up with being integrated by representatives of the associations Euexia, Megagumi, 24 Fotogramas, La Colectiva Errante, Rolling Custom Club, Plasencia Foto, Plétora Teatro, Algazara Teatro, Amigos Modelistas Placentinos, the Extremadura Writers Association and the Extremadura Archeology and Heritage Society as well as the following companies: Europa+i, PlanVE, Espacio Blomberg and La Puerta de Tannhäuser.

For months, the members held numerous working sessions and some of them participated in international meetings with representatives of other European cities behind Come in!, sharing objectives, methods and difficulties with them. The experience, according to Wendolín García who participated in one of those meetings in the Romanian city of Gheorgheni, is very enriching, because "it allows us to know other cities and the methods with which they work" and because in them "each one we can contribute to, and we can receive to make our city better and make it grow”. 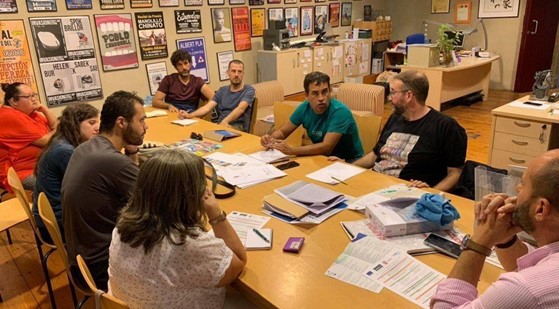 As a starting point, the City Council had proposed to integrate the good practice of Budapest 100 in the framework of "La Noche Abierta” (“The Open Night"), since it already revolved around heritage and had great acceptance by citizens, and perhaps that would make the transfer easier. The Urbact Local Group decided that the incorporation of the good practice was so important that it was convenient to highlight it by changing the name of the activity. That is why “La Noche Abierta” became “Plasencia Abierta” (“Open Plasencia”), a name that gave greater prominence to the city and that insisted on the idea of openness, an idea that was reinforced incorporating into the program visits to residential buildings.

The main idea was that , during the festival, people from Plasencia could visit not only heritage buildings, but also modern ones, and they could listen to stories told by inhabitants, stories that are part of the secret historical memory of the city. Thus, within the activities of the recently baptized "Plasencia Abierta", the activity “La otra arquitectura” ("The other architecture"), our own version of the good practice was born.

However, the transfer was not easy. "At times it was frustrating," says Juan Ramón Santos, representative of the Extremadura Writers Association. "It was difficult to explain the project to the city and even more difficult to involve neighbours in two practices absolutely strange for us: opening their buildings to receive visitors and sharing experiences with them." To achieve this, the members of the Urbact Local Group had to carry out an intensive outreach work among friends, neighbours and acquaintances. Thanks to it, they got a handful buildings and residents who wanted to participate in the experience. Then it was necessary to look for documentation and collaborators, and also to prepare materials and gather volunteers to monitor the buildings, guide the groups of visitors - something difficult to achieve as it was an activity still little known.

In spite of everything, on the afternoon of September 21st, 2019, the first edition of “La otra arquitectura” was held within the framework of “Plasencia Abierta”, and the result, despite the rain, was very satisfactory. Both for the participants, who were able to discover a different city, and for the residents, who discovered, through the eyes of the visitors, the unexpected value of the place where they have been living. "These things are great," said Magdalena Sánchez, a resident, excited to share her experiences, "especially because it comes from ordinary people, I mean, you don't have to be an expert in History to be able to tell people these stories". 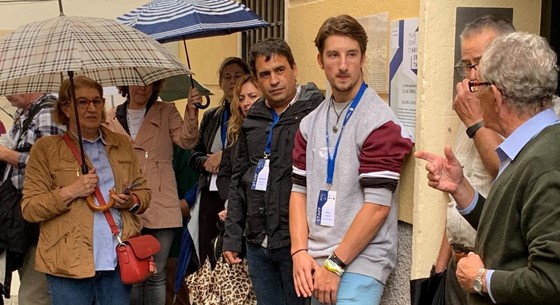 The foundations were laid to try to carry out an expanded version of the activity in 2020, with a greater number of participating buildings, with more volunteers, with more neighbours. But this time it was not the rain, but SARS-CoV-2 hampering the project. ULG meetings were firstly cancelled, then they moved to online, and despite the desire to continue, it was decided to postpone the activity since they were about opening doors and let people meet.

The intention is to repeat the magnificent experience in 2021, after the project closure. But until then we had to maintain the spirit of the activity, making its purposes better known and inviting neighbours and owners to participate in the next edition in person. To try it, the Urban Local Group has launched an online version of the festival, inviting citizens to share images and stories related to their buildings, their streets or their favourite corner of the neighbourhood through short videos.

The videos were disseminated on the local FB page, through the profiles of the City Council and the project, and, if circumstances allow, they were screened together in a small film marathon at the Alkázar Theater.

We hope that all this will serve to strengthen the spirit of this interesting European community practice in the city, to disseminate new samples of the tangible and intangible heritage of the city and to warm up engines in order to soon hold a second edition of "Plasencia Abierta – La Otra Arquitectura”.

Submitted by Adrienn Lorincz on 06 April 2021