Change in the local administration: where a little magic string goes a long way

Cluj-Napoca is the is one of the most populous and dynamic cities in Romania, and one which I have seen evolve at an incredible pace in the last years, growing ever more integrated and inclusive. Now, with over 5100 NGOs, 1,500 cultural events and 100 festivals a year, 12 universities, 50,000 students and 350 new IT start-ups a year, governing the city is a complex challenge – one which is addressed by the almost 800 local public administration employees.

But, with a bustling local ecosystem and ever-changing expectations, how can the city ensure that it can provide these 800 civil servants with the same creative opportunities for sharing their ideas and energy?

Innovation support is not a new priority for the city. In the last 15 years, Cluj-Napoca went from a grey, rigid and unattractive place governed top-down, to a partner and a catalyst for local innovation in the private and NGO sectors. Through collaboration and trust, the City Hall has innovated the city governance structure and development policies to become one of the most attractive new social, cultural and technological hubs. The main effort has been put into the “4 Ts”: Talents, Technology, Tolerance and Trust, out of which initiatives such as the Participatory Budgeting (2013) or the Innovation and Civic Imagination Centre (2017) started appearing. Recognized as great successes both locally as well as internationally, these actions leveraged on cooperation with the local ecosystem and outreach to the citizens – but something was still missing.

Out of the many inhabitants of Cluj-Napoca, about 800 of them are public servants. They are both citizens as well as “inside” employees, specialists in the city administration, and this dual role has been an obstacle for capturing their knowledge and ideas in the same way in which a simple citizen can now walk up and propose a project. There is a discrepancy here, and it is strongly felt by the most creative of the public employees.

At the same time, in an ever-constant status quo, most of these very competent people perceive themselves as “cogs in the machine”: a small piece in a bigger mechanism, functioning by strict and oftentimes outdated protocols and rules, in a legislative framework that does not promote lateral thinking. Half of that is because public administrations are like very big, but slow vessels, and changing their course is hard work (especially in Eastern Europe!). But half is also a question of mindset and self-perception for the civil servants. These are both big and complex needs, but do they really need big and complex solutions?

This was a question that the city hall was grappling with when the possibility of joining the URBACT Transfer Network „Innovato-R” appeared. The idea „clicked” immediately, and the whole local team was very excited! 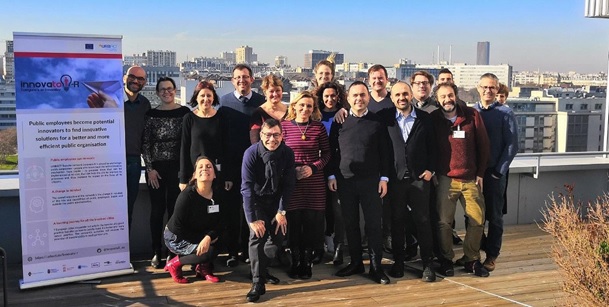 Maybe the best way to describe Innovato-R – at least for me – is as a creator of space (physical, imaginative, cognitive, social) for public sector innovation. It shifts things in a very simple, people- centered, lean way, building on the experience of Best Practice city of Turin.

The approach is based on the concept of "Minimum Viable Product" (MVP). Together with the Metropole Du Gran Paris (France), Murcia (Spain), Porto (Portugal), Veszprem (Hungary) and Rotterdam (Netherlands), Cluj-Napoca is now working to develop participatory projects dedicated to improving the performance of local government, reducing losses, harnessing resources and increasing the quality of public services.

In this sense, when I think of Innovato-R, I think of a magic string, pulling resources and out-of-the- box ideas together and connecting people. 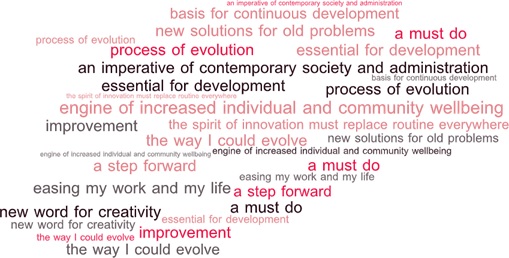 I have only joined Innovato-R as ULG Coordinator at the end of 2019, but I’ve been familiar with the project and its ambition from the start, having witnessed the steps leading to the definition of the transfer plan in Cluj. Joining the team was a great opportunity to be a part of something completely new for Romania: an open experiment in a local administration. And bottom-up, no less!

What I think really inspires in the Innova.TO best practice approach of Turin is the shift of mindset: everyone can innovate. All 10,000 municipal employees are encouraged to see themselves as potential innovators and to develop ideas for improving the administration’s performance, policies and programmes.

The most important success story of Turin’s call for project proposals within the administration is not necessarily the number of proposals or the ideas themselves – but the way in which running even one call made a difference in changing mentalities, building self-trust, self-worth and empowering municipal employees. Above all, I believe it made a difference by supporting individuals to engage in a collaborative way in order to find new solutions to old problems. At least here, there is a lot of reticence to doing things together in the local administration. Things change, but slowly.

This is a key result which we wanted to see in Cluj-Napoca as well: a more horizontal, bottom-up and cooperative approach to accomplishing good quality work the city hall.

Together with the ecosystem, Cluj is working on understanding the challenges of adapting the best practice of Torino at local level: how to overcome pessimism and passivity and inspire an active, participatory stance of civil servants. The city created its ULG as the core of the strategy, welcoming key stakeholders from universities, NGOs, governance and institutional actors such as the City Hall Social Services and the Metropolitan Area, but also private partners, local innovators and leaders in their own right.

Of course, some adaptation was necessary. While the Innova.TO approach is almost „off-the-shelf” replicable, the main challenge was how to create ownership and to relate this (totally new) approach to the local history of practices and legal framework. As Occam’s Razor goes, we found that it's always better to build on what's already there: the Participatory Budgeting platform. The core idea here is that "spinning off" already implemented processes makes people more open and willing to experiment. So, since Participatory Budgeting via online platform has become a city staple in the last years, the team decided to adapt Innovato-R via a pilot call through an internal platform contest of ideas for the city hall. 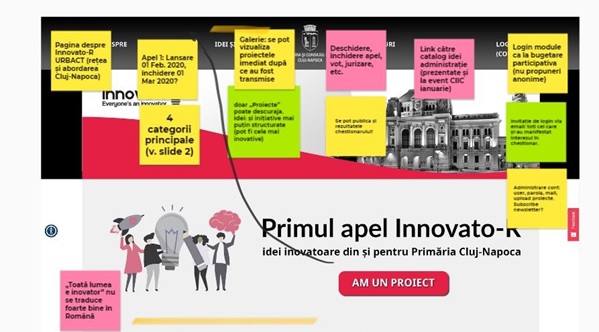 For the pilot Innovato-R call, beyond form adaptation, the key point is how to transmit the core message that everyone is an innovator, in the local context / state of play. No matter how „small” or „simple” the idea, if it has the potential to make the city hall more connected, professional, receptive and sustainable, it is welcome – and it doesn’t have to go through the „usual” hierarchic channels, it goes straight to the top!

This is why I believe that the most successful adaptation actions of Cluj-Napoca to the Innova.TO model have been the ones focusing on establishing a strong link, a common understanding, and growing the capacity of city hall employees. The open questionnaire helped not only to raise awareness, but for me personally it was an incursion in the minds of so many competent people with so many unspoken ambitions, an honest and candid snapshot of how they perceive their work, and something which was essential to the selection of priorities for the call.

Understanding the barriers and reticence felt towards engaging in open innovation as a civil servant and being able to address these barriers in an open discussion during the call launch event have been key factors of success.

The steps and results which Innovato-R had so far in Cluj-Napoca can serve as a `blueprint` for replication in other cities across Romania and beyond:

An essential part of the transfer process has been the support from URBACT, specifically from the Lead Expert and Ad-Hoc Experts. All of the transnational meetings have provided key ingredients in a step by step learning process, providing depth to the lean start-up concept application in the city hall.

The process has not been without challenges. When the Covid-19 pandemic started, we were just preparing to deploy the `internal CIIC` meetings – the capacity building workshops with civil servant innovators, finalists of the first Innovato-R call. The city had to put these meetings on hold, but the physical component, hands-on interaction and brainstorming is an essential part of our three-pillar Innovato-R Model: the community, the digital platform and the CIIC (the physical “agora” of internal innovation). So, Innovato-R workshops will be the `first next step` which the city will take on in order to support its employees. 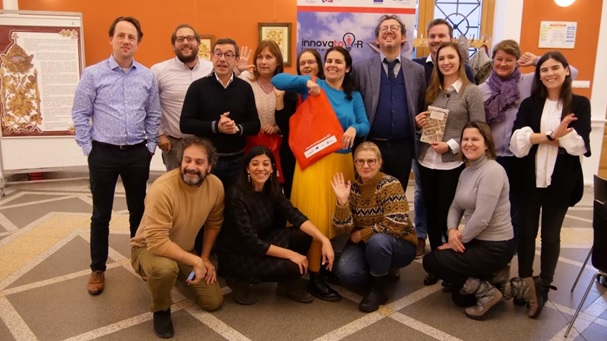 Submitted by Valeria Tarallo on 09 April 2021