A city fighting climate change: How Nantes got its citizens to talk energy transition

Tackling climate change was never going to be easy. But in the afterglow of the Paris COP21 Agreement, at least it seemed that we were moving in the right direction. By late 2016, the biggest polluters were signed up, and there appeared to be consensus on the scale and urgency of the problem, as well as on what needed to be done. What a difference a year can make. From where we are now, feels like we have another mountain – or two – to climb.

In all of this, perhaps the biggest battle is taking place within citizen’s heads. Given the magnitude and complexity of the global warming challenge, it’s easy to feel that, as individuals, we can make little difference. At times like this, mobilising public interest and stimulating civic action is critically important. But making the threat of climate change real is a complicated business – especially when so many people are worried about jobs, housing and other pressing daily issues.

It’s in cities where this battle will be won or lost. That’s one of the reasons why URBACT networks like Freight Tails, Resilient Europe and, previously, EVUE are so important. The late Benjamin Barber was right when he recently underlined the key role cities play in addressing climate change. As he notes, there is a lot to take encouragement from, as cities introduce all sorts of creative ways to improve the urban environment. Medellin’s Metrocable, Oslo’s Tesla taxis and Seoul’s electric bus fleet are amongst them.

Yet, many of these urban initiatives reflect a top-down approach to imposing solutions. This week saw the publication of another gloomy set of World Health Organisation statistics relating to air quality. This shows that apart from the Nordic countries, our urban air quality levels remain dangerously high across much of the EU. Most citizens worry about this, but many feel disempowered to do much about it. So, what can city authorities do?

Civic participation can be an ambivalent issue for city administrations. People power, once unleashed, can be an irresistible force, and not always for good. However, it is clear that we are living in a period where the relationship between politicians and the people is being redefined. It is also clear, for many city authorities at least, that with diminishing rates of electoral participation, the legitimacy of their actions can be questioned. We also know is that it is at the local level, where new trusted connections between citizens and government are best created.

Consequently, cities across Europe are exploring new ways to involve citizens in their decision-making processes. Within URBACT, many cities, including Amersfoort and Gdansk, have tested new mechanisms. Current networks such as CHANGE! are also exploring this theme, which was also well represented in the response to the recent URBACT call for good practices.

In specific relation to the climate change debate, the city of Nantes – an URBACT city and active Eurocities member – has been pioneering work in this field with some success.

Situated in northwest France, Nantes has a population of 630,000 inhabitants, 36% of whom are aged under 25. Enjoying a reputation for a healthy work-life balance, it was the first French city to be awarded the status of European Green Capital, in 2013. An active member of Energy Cities, Nantes has a commitment to reducing carbon emission rates by 50% by 2030 (compared to a 2003 baseline) and to triple its production of renewable energy in the same timeframe.

During the past eighteen months the city has been on an innovative journey that will conclude in the autumn of 2017. This has taken the form of a Grand Débat, or Big Debate, about the city’s future energy transition. The end point will be a Citizens’ Commission report that will inform a new energy transition roadmap adopted by the Nantes Metropolitan Authority. But Nantes’ real end point is much more ambitious – a genuinely participative approach to managing the city’s energy transition.

The Big Debate has been a thoughtful and well-planned process. Prior to the launch in September 2016, there was one year of preparation, and a commitment to invest €630,000 (€1 per citizen) in the process, supported by a project team of five over an 18 month period. Alongside them, an independent commission of four volunteer citizens has overseen the process. Their role has included guaranteeing the openness of the debate and producing the final Commission Report. 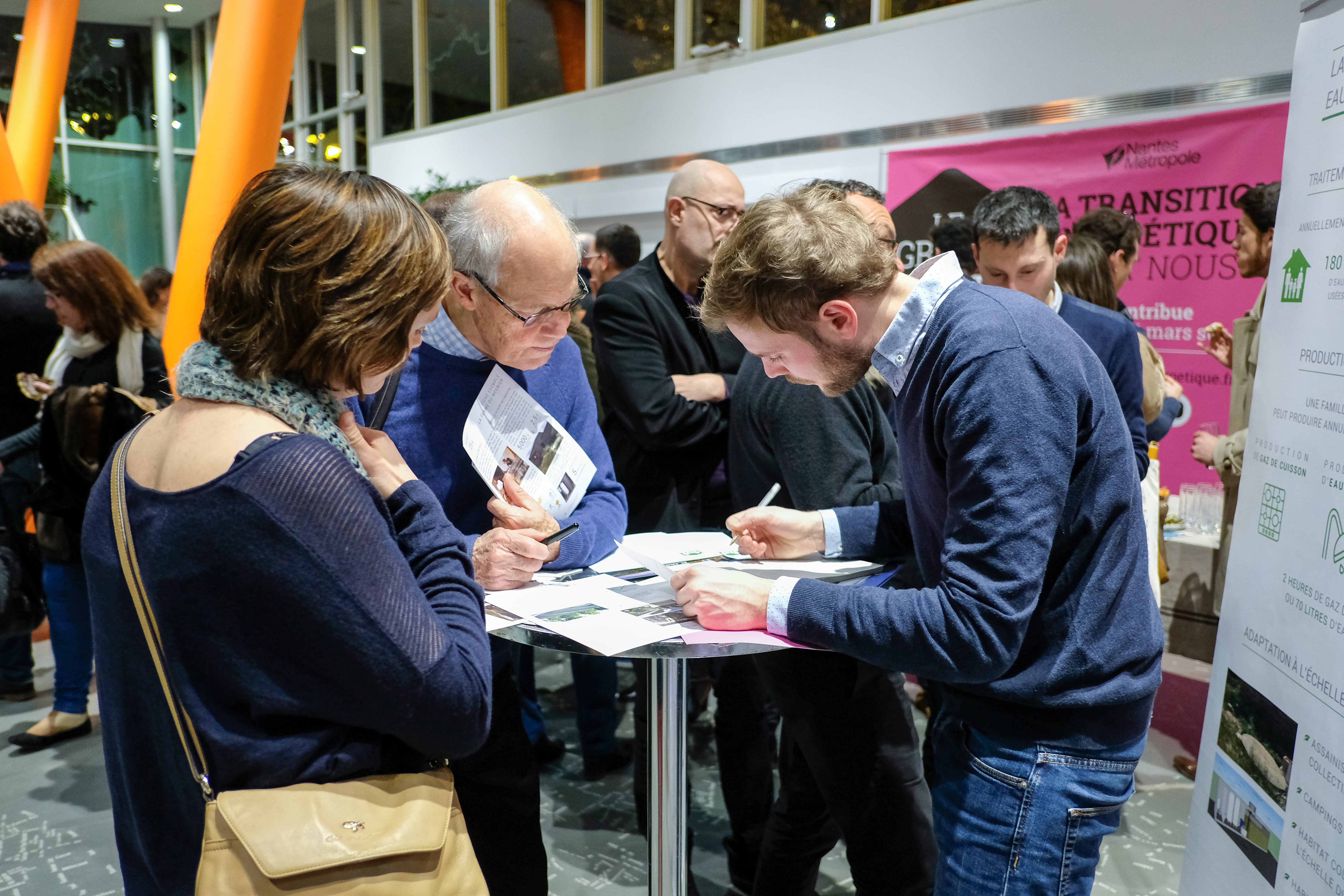 So, what steps did Nantes take to encourage citizen involvement? Following a high profile publicity launch, made alongside key stakeholder organisations throughout the city, a number of tools were used. Individuals could attend know-how sessions that outlined new energy developments. They could also submit suggestions online or via social media #NantesTransitions. More tangibly, a huge pink travelling container gave the chance to walk in and talk in person.

In addition, a series of interest-groups was set up, including Hikers, Crowd-funders and Pioneers. Participation in these groups allowed citizens with particular interests to examine the issues through a particular lens. The Crowdfunders eventually raised more than €100,000 for experimental projects that included food events, an acquaponics pilot and a shared solar energy roof. The pioneers generated a series of challenges that were taken up across the city by families as well as schools and other organisations.

The deadline for responses to the Big Debate was 31 March 2017. A total of 53,000 people participated in the process in some way, with 11,000 citizens very actively involved. The experience involved 270 local organisations, and Grand Débat social media platforms attracted 4,400 followers. In terms of outputs, 760 written solutions were posted, whilst 160 journals were written by a variety of stakeholders – each contributing their ideas and suggestions.

Ultimately however, the success of the Big Debate will come down to the quality of the final Commission Report and its contribution to the changes required to achieve Nantes’ low carbon future goal. In the coming months, the final part of the story can be followed on the project’s website.

The personal is (always) political 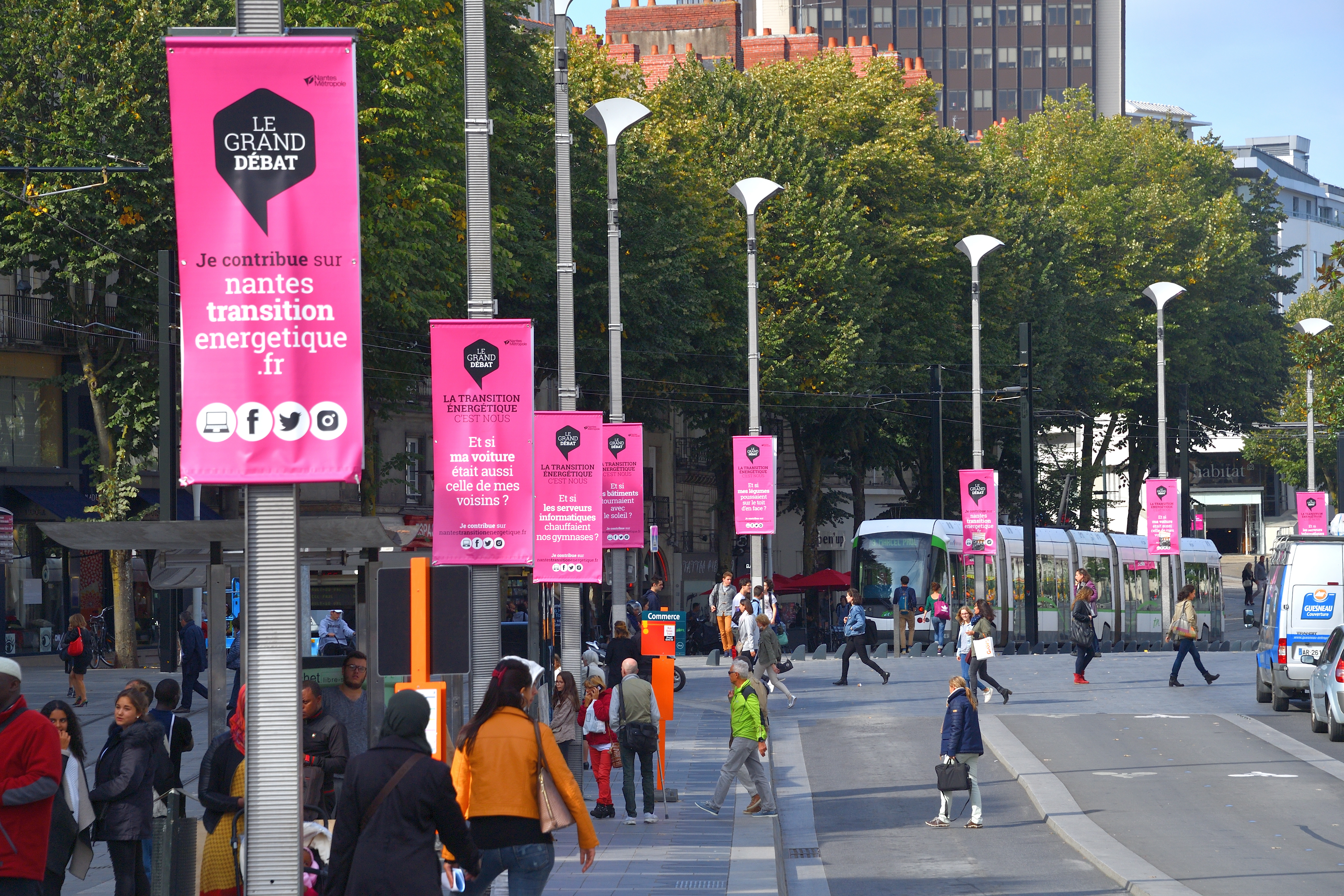 From discussions with those leading the Nantes process, it is clear that one of the key drivers was a commitment to raising awareness of the energy and climate change challenges, as well as promoting a sense of ownership and responsibility for the solutions. It is often easier to say what other people should be doing, than to examine our own behaviours and identify what needs to change for the wider good.

The Big Debate also opened up a discussion about respective stakeholder roles. Certainly, city authorities have a key role to play in establishing a low carbon future. But they cannot do it alone. Nor is punitive legislation the solution. There is a huge amount that cities can achieve through their governance levers, but a codesigned approach is more likely to succeed, as the URBACT Programme underlines. This is because as well as mobilising collective brainpower, it encourages the shifts in attitude and behaviour that make a positive outcome more achievable. It is also because the proposed solutions can feel shared.

The potential realignment in the relationship with citizens around this complex urban challenge will perhaps be the most important legacy of the Big Debate itself. Ultimately, it will be people, not technology, that will decide our future. That’s why Nantes has adopted this approach to getting its citizens on board.