Collaborative housing models that put residents' needs before private profit are raising standards in affordable and adequate housing. They are part of a broader portfolio of housing solutions for ‘cities engaging in the right to housing’ – the theme of a series of three webinars jointly organised by URBACT and Urban Innovative Actions (UIA).
Typically based on forms of governance that balance individual desires with collective needs and ensure diversity among tenants, community-led housing can also generate ways of living that are better adapted to meeting the complex socio-economic, health and environmental needs of individuals, communities and cities in the 21st Century.

“There is no doubt that collaborative housing will become more and more important as it includes also the element of support and solidarity that many people will be looking for.”

In this article, we present and explore the main types of collaborative and community-oriented housing schemes discussed at the webinar and reflect on the contribution they can make to meeting modern societal needs. We end by asking what more can be done at European level to support such solutions as part of a broader rights-based approach to housing.

Understanding the diversity of community-led housing

A variety of interrelated terms are used to describe aspects or forms of community-led housing. These include terms such as ‘collective, ‘collaborative, ‘resident-led’, ‘participative’ and ‘self-organised’ housing, as well as concepts of ‘cohousing’, ‘social production of housing’ and ‘self-construction’. End-user participation and collective decision-making are common threads, along with visions of housing and land as common goods.

These models are widely seen as an approach to complement state- or municipality-led public housing schemes, going beyond the simple provision of primary housing needs. They have typically been driven by motivations including affordability, a longing for community life, and social inclusion as well as progressive agendas around gender equality, environmental sustainability and demographic transition.

Different social and technological trends later added their marks to the quest for alternatives to public and free market-led housing. These include the civil rights movement of the 1960s, which influenced the creation of the first Community Land Trusts (CLTs), and the emancipatory movements of the 1970s which led to new forms of collective living.

More recently, the global housing crisis of the new millennium has given a re-birth to a new generation of housing activists who helped create resident-led cooperatives, self-managed collective housing and CLTs.

In our webinar, we focused on three models – the cooperative, Community Land Trusts and co-housing models – through UIA and URBACT city examples. It was an opportunity to hear from elected members, civil servants, activists and other active voices in the field. In the following sections, we take a more detailed look at some of these forms.

Andreas Wirz, board member of the Swiss Housing Cooperative Association, explained that his country has a long tradition of cooperative housing. This tradition was given an important boost in the 1980s as new enthusiasm grew for alternative ways of living together. Today, in Zurich, there are about 35 000 cooperative housing units and 25% of all rented flats are not-for-profit.

Housing cooperatives offer a great diversity of sizes and floorplans of individual dwellings, combined with shared facilities. Such models can thus respond effectively to the needs of the community, as well as those of diverse families and individuals, in ways that are not only the most affordable way to live in Switzerland but also use less space than alternative forms of housing. 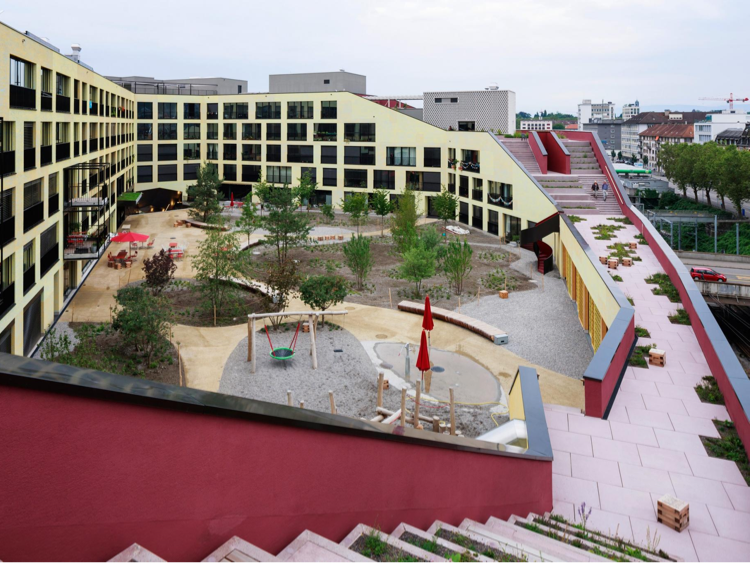 The Swiss model, with its established ecosystem of cooperative housing, relies on strong cooperation with public actors. In Zurich, for instance, local and regional housing subsidies are complemented by federal mortgage guarantees and a central office for non-profit housing construction. In addition, the Swiss Housing Cooperatives Association helps new housing projects with revolving funds, solidarity funds and equity participation.

Housing cooperatives are not limited to areas with long cooperative traditions. In Chemnitz, lead partner city of the URBACT transfer network ALT/BAU focused on activating unused and decaying housing stock, the first housing co-ops were built from scratch.

Volker Tzschucke, one of the founders of a pioneering housing cooperative in Chemnitz explained at the webinar how an organically growing group of friends and acquaintances opened a new housing paradigm in the city with the help of a local cooperative bank that fully embraced the initiative. In a shrinking city like Chemnitz, the cooperative model can be an important instrument for community-led regeneration of empty buildings and flats.

A key feature of Community Land Trust (CLT), as Arthur Cady of CLT Brussels (CLTB) explained at the webinar, is that they protect land and housing from real estate speculation. They do it by “acquiring land and leasing it with a long-term ground-lease to homeowners of the building sitting on the same land.” With this mechanism, land is kept in a trust and only the buildings are sold at fixed prices that are kept permanently affordable.

Unlike other affordable home ownership programmes where public subsidies have to complete the price to be paid to buy or rent housing units, CLTs require only one initial investment to buy land and erect or refurbish the buildings. This is the innovative approach currently being tested in the UIA project CALICO, where public funding was crucial to buy the land, and enable the price of units to be kept affordable to the most vulnerable groups.

Being a model primarily based on home-ownership, participants at the webinar asked what would happen if owners of the CLT units wanted to sell. The owners are allowed to sell at the same price of the purchase plus 25% of the added value, no matter how long they have lived there, thus keeping the price for the transaction below the market price.

CLTB’s inhabitants are all eligible for social housing, making CLTB an officially recognised social housing provider with regular subsidies from the Brussels Capital Region. CALICO includes a scheme for single-women and intergenerational residents, with care facilities and services integrated in the housing project.

CLTB has a democratic governance system that includes not only public authorities and residents but also neighbours and civil society representatives. This allows the broader urban community to have a stake and a say in the development process. Community involvement efforts of the CLTB also include training people to manage co-ownership, creating community spaces to be used by local associations as well as making land available for local initiatives.

Today, Europe counts 109 CLTs in England and Wales, 22 in France, 4 in Belgium and many others under creation in Ireland, the Netherlands and Germany, including with support from an INTERREG project ‘Sustainable Housing for Inclusive and Cohesive Cities’ (SHICC), which seeks to support the establishment of more successful CLTs in cities across the North-West Europe (NWE) region, 2017-2020.

The first German CLT is currently in conception in Berlin, a city that is already home to over 500 cohousing projects, but where land has been virtually inaccessible in the past years. As Michael LaFond, founder of the Institute of Creative Sustainability and the cohousing berlin database explained at the webinar, CLTs here offer a learning process that brings the experience of cohousing and cooperative housing projects to another level.

The Berlin CLT – called Stadt Boden Stiftung – will be a “citizen’s foundation”, a democratically controlled local organisation with the direct participation of residents, the neighbourhood, donors, public bodies as well as experts. More than single housing projects, the Berlin CLT will thus allow housing activists to build a more coherent policy framework, closer cooperation with the local government, broader democratic decision-making structures and a more solid, long-term perspective for collaborative housing in the city.

Other forms of collaborative housing have also been tested in less favourable institutional settings. In a context with little tradition of public-civic cooperation and a rapidly shrinking public housing sector, the Budapest district of Zugló has been engaged in developing the UIA-funded E-Co-Housing project to create a new, environmentally sustainable community.

Rebeka Szabó, the district’s deputy mayor, explained that Zugló's ambition is to create a prototype for an economically feasible and environmentally sustainable social housing scheme that can be replicated at the local level without the need for state-level support. In cooperation with green technology companies, environmental and social NGOs and a university, the district municipality has engaged a focus group to co-design a housing block with community spaces, shared facilities and smart technology solutions, which will, for example, allow future residents to monitor their energy consumption.

While collaborative housing cannot solve all the housing challenges of Europe, different non-speculative forms of tenure can be part of the solution. They can play a key role in meeting some of Europe’s most pressing needs – exacerbated by the impact of Covid-19 - around housing inequalities, social exclusion, sustainability, and more. It puts residents and the community first, places governance at the heart of its initiatives and provides models for affordable and environmentally sustainable housing.

Cities bear the most important responsibility in making sure that its citizens benefit from access to adequate and affordable housing.  At the same time, the National and indeed the European level can play an important role in supporting such endeavours through the European Regional Development Fund, European Social Fund+, European Investment Bank, Invest EU and others. This also includes networking of cities supported by URBACT, the piloting of innovative schemes through UIA and other exchange initiatives such as housing2030.

Already, the Urban Agenda for the EU (UAEU) has played a key role by supporting a specific Partnership on affordable housing - bringing together representatives of cities, member states and various European institutions and initiatives – which agreed a shared Action Plan in December 2018 focused on ‘better regulation’, ‘better knowledge and governance’ and ‘better funding’.

The joint learning activity of URBACT and UIA around ‘cities engaging on the right to housing’ builds directly on this and other EU UA partnerships’ work. In particular, this first URBACT-UIA webinar on community-led housing models aligned and supported the recommendations in the Partnership Action Plan on good housing policy and governance at local, regional, national and EU levels.

Michalis Goudis concluded the webinar by saying that reinforcing this type of learning exchanges is a clear contribution for the future ahead, turning the EU Charter of Social Rights and the European Pillar of Social Rights into a lens for all EU policies.

Look out for future URBACT-UIA webinars covering the European journey of cities towards the right to housing.

Register now for our next webinar dedicated to housing exclusion.

Missed the webinar? Watch it in full here on the URBACT channel on Youtube.