Exit from the city centre. What was recently built in Varaždin, HR?

Being very very proud of their neat and preserved historical city, the people of Varaždin love stories about the pink facades of baroque palaces in the historic city centre. But they rarely or never notice buildings from the twentieth century and ask themselves about their story.

Driving a car from Vienna, Warsaw or Budapest to the Adriatic coast in Croatia will also take you to Varaždin, a city nested in a super safe central European environment with its fifty thousand inhabitants. Daily routine of those inhabitants includes drinking endless coffees, going to work from 7 - 15, walking by the river Drava, going to the market (Saturday obligatory) and never resenting anyone. Varaždin is too often called Little Vienna, but it has – like many other cities - more modern stories it can offer to its inhabitants and visitors.

Baroque ego of the city and the urban challenge

The identity and the ego of Varaždin are strongly wrapped around historical baroque architectural heritage from the time when the city was shortly a capital of Croatia in the 18th century. But in reality, Varaždin is not only a baroque city. It started to create its urban pattern in the middle ages which is rarely mentioned in the stories of citizens. Twentieth-century gave mesmerizing intelligent buildings citizens are not aware of as valuable heritage. Is this something we should fix? 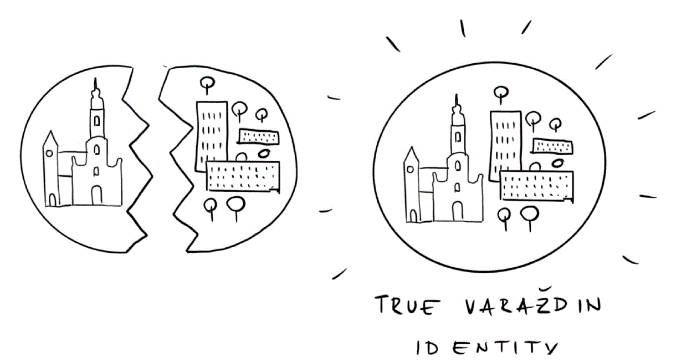 rom the eyes of an architect, the answer could easily be yes. But it is a very relative choice, after all, everyone is entitled to their own opinion and if everyone wants to stick to the baroque story forever, it is their thing. Should little European cities remain forever hidden behind their baroque, medieval, renaissance, or other historical masques? No, the time has come to try a little change.

The answer to that question came to Varaždin in the fall of 2018 when for the first time we have encountered the Urbact III Come in! transfer network. Varaždin vice mayor was invited by the National Urbact point to join the second phase of the project led by Budapest district 11 Újbuda, transferring 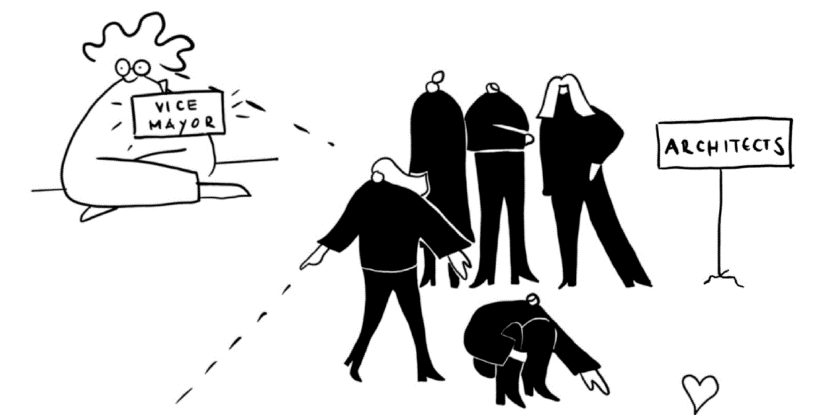 the good practice of Budapest100 community festival. Our vice mayor was previously a civil society activist and was familiar with the work on research of the architectural heritage of the 20th century by the Association of architects Varaždin in past years. She accepted the invitation, and the transfer process began.

Our task was to transfer the good practice of Budapest100 by organizing the community festival which would promote the importance of certain buildings and involve the tenants with their stories about the buildings they live in. The project was supposed to reduce social isolation by inviting neighbours and citizens to talk about their buildings and get acquainted with each other and with buildings they had not paid attention to before. ur plans were simplified by the Urbact support and the given Urbact tools. As any Urbact project, Budapest100 good practice transfer was innovative and challenging, still well-coordinated and promising.

Beginning of the project

Come in! was not a difficult project, we were not developing strategic changes or planning wavering actions. We just wanted to tell the story about architecture and the way of life in Đurek, a residential neighbourhood from the sixties. Built in the era of modern urban planning, Đurek was and still is a bright example of a healthy, rational and functional neighbourhood with quality flats where people still gladly move and live. Close to the city centre, but far from that historical ambience. 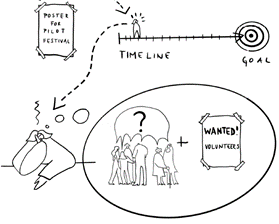 ur first learning experiences at the beginning of 2019 from the lead expert and lead partner were very positive and it was clear that the project will be well guided. The goals were set clearly and the timeline was defined. A very valuable experience was a visit to the original Budapest100 festival in May 2019. Afterwards, we developed a Transfer Plan with our Urbact Local Group. It was realistic and doable in the given period. Our goal was to have a community festival Đurek 60 in April 2020.

Dissonance is in the air

As the project developed it became obvious that some obstacles awaited us along the way. The dissonance firstly mentioned by our lead expert in the context of historical versus contemporary built heritage has quickly replicated to two other fields we did not think about earlier. We had architecture through the eyes of experts versus architecture through the eyes of a layman. We had a bottom-up concept within a top-down structure (project run by the municipality). The bottom-up concept needed volunteers that will design a community festival in an ex-socialist country that has very limited culture in that regard. 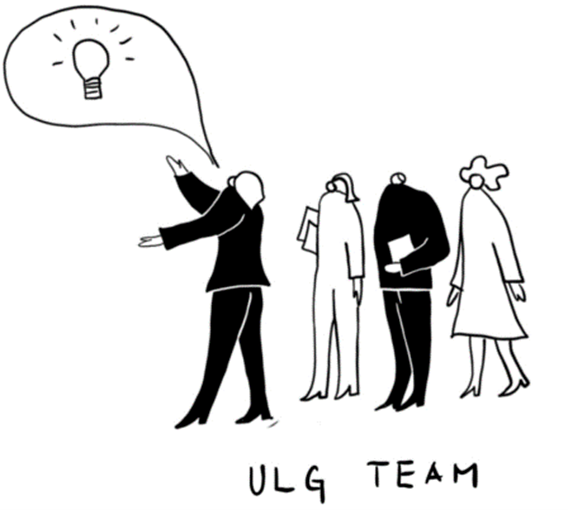 owever, the Come in! journey developed smoothly throughout the year 2019. Our obstacles and worries were solved one by one along the way.

Our partners had organized pilot festivals that we visited, and it was a huge help. We learned they were facing similar challenges, such as communication between different stakeholders, finding people who will tell stories or organizing the festival in overall, visitors entering the buildings in a peaceful neighbourhood. During those visits, we have strengthened our original idea that the festival must be stretched throughout the neighbourhood and connected by different carefully scheduled events.

One of the positive breaking points was the realization by the end of the year 2019 that our volunteers became a firm group of 15-20 people who were modestly doing their tasks. The key was, as it turned out, to engage a small number of interested people who are leaders of a bigger group instead 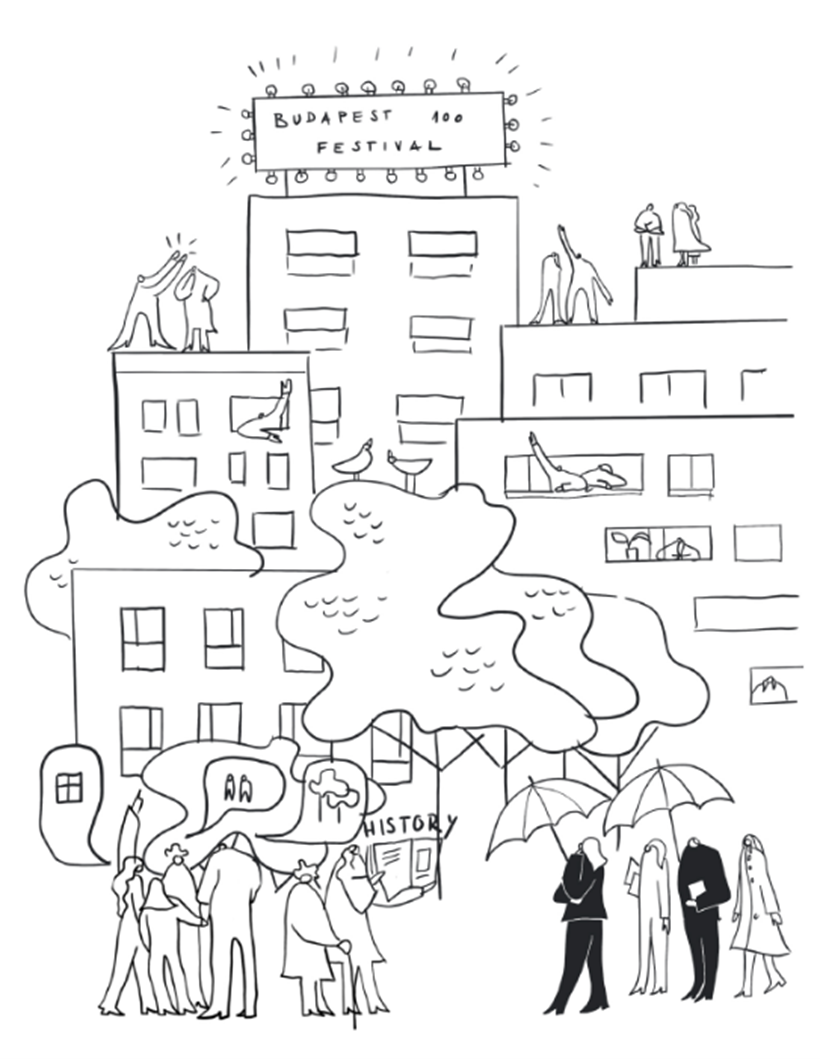 of engaging everybody at all costs. So, we had a Kindergarten principal, Elementary school psychologist, Association of architects, Chief of the Veterans association, Manager of the buildings and found few tenants through acquaintances. That turned out to be a perfect formula. This group had an excellent synergy and the plans for the festival were ready at the beginning of 2020.

Festival at the time of pandemic

The planned festival day arrived in a super sunny and warm way in April, but the festival location was empty: Covid-19 lockdown was in progress, and the festival was postponed. The whole concept and the sudden change of the transfer process were surreal, and we adapted to the new way of managing things. We set the new date in October. Until the last moment, we did not know at all whether we will do it or not. As the global Covid situation was getting worse again, we knew it might be now or never, and decided to go for it. We simplified and reduced the program and adapted it to relatively light epidemiological measures. To our great sorrow, it was obvious that the festival is going to happen without our Urbact Come in! partners.

we took a desired step out of our historical city centre! Children from the neighbourhood with the support of their elementary school and kindergarten had musical performances and presented their drawings. Storytellers, the residents who have been living in Đurek since its beginning shared their personal stories with the visitors. The festival was held in the park dedicated to the military brigade named Puma, so they told their story next to the monument. One volunteer resident created an exhibition with some historical facts of the area. Architect volunteers had done a lot of research and they presented the results through an exhibition, a documentary film, a workshop for the visitors and architectural walks. At the festival Đurek 60 everything was as perfect as it should have been on a decadent autumn day. Later it turned out to be the last possible weekend to do the festival before the new Covid measures.

"It is better to be approximately right than exactly wrong"

, claims author C. Read. I was completely wrong when at the end of September 2020, I rooted for postponing the festival out of fear and unwillingness to give up on the original concept. Apart from the described benefits of the festival, this was also a micro lesson about resilience and instant decision making in spite of the unknown outcome. Humans are adaptive, and if you bravely act you will bravely harvest, not just in terms of our last decision to hold the festival in October. Throughout the process, we managed to minimize our worries and go with the flow but still remained focused on instructions, protocols and plans during the entire journey. Dissonant built heritage came few steps closer to the residents of Varaždin. Volunteers formed a strong integrated group. Architects and residents found a common language and learnt to talk to each other and to others about dissonant architecture. The vice mayor created a sparkle of a bottom-up city glow by leaving it to the volunteers to organize this small city festival on their own.

of the Urbact project Come in! to Varaždin was not an accident. We already had a strong group of young architects called the Working group within the Association of architects Varaždin. Recently they have been exploring the contemporary built heritage of the city. Đurek 60 pilot festival was a perfect way to upgrade their research to a new level by connecting it with local people. In the close future, they plan to publish a book about this experience, which would be a sequence to their first book “Architecture of twentieth-century in Varaždin”. A short documentary produced within this transfer process was already noticed on a national level. At the moment, our Working group is looking for ways to disseminate gained knowledge and practice on a national level together with other participants of this lovely transfer. 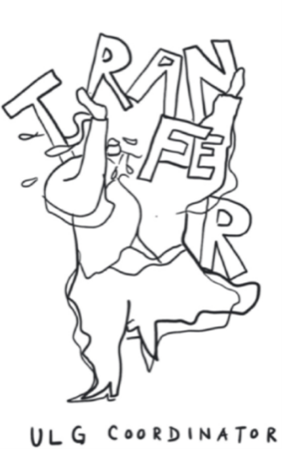 Social isolation is a challenge of modern communities that finds solutions through various actions. At first glance, promotion of 20th-century architecture and socializing of neighbours Martina, Margareta and Renata on the fourth floor of an elevator-free building from the sixties seem to have nothing to do with each other. This is the moment when we use the Come in! project to cross the usual limit of perception of these two topics. If our three ladies instead of the usual talk about the market, grandchildren and houseplants after the Đurek community festival proudly raise the topic about the architectural value of the building in which they live, we made a shift towards awareness of twentieth century-built heritage. We gave them a reason to step out of their comfort zone, create new social connections and learn.

Submitted by Adrienn Lorincz on 14 April 2021