Food, Foo Fighters and a Forward Thinking Attitude, a success story from Cesena

Cesena is a small Italian town not far from Bologna. Foo Fighters is one of the greatest rock bands on earth, filling stadiums in big cities. Still, in 2015 they gave an intimate concert to 3.000 fans in Cesena. How could this happen? And what does a startup centre have to do with it? Read on to find out!

Cesena is a beautiful, relaxed Italian town with narrow streets and countless old buildings. The seaside is just a 20-minute drive, and if you are a ski-aficionado, you can easily find quality slopes close-by. In short: it is a very nice place to live. In addition, Cesena is home to a number of faculties of the prestigious University of Bologna, attracting students from all over Italy.

After graduation, however, most of them move to other countries, or to big cities in Italy, in search of more exciting career opportunities. So the question was, what could the city do to retain at least some of the talented university graduates in Cesena? One of the answers was the creation of an incubator 4 years ago, to attract and nurture startup enterprises and promote innovation. The idea came from a university professor - and the City Council immediately backed it.

This incubator comes by the name of ‘CesenaLab’. 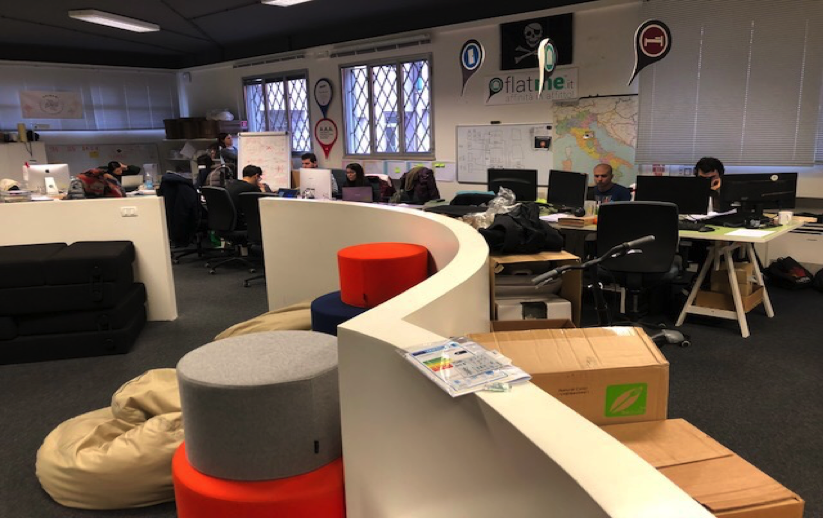 Co-working spaces, start-up centres and digital incubators are booming in big cities all over the world. They are less common, however, in smaller towns like Cesena. CesenaLab was conceived from the beginning as a simple, low-cost operation, and the founders - the Municipality of Cesena, the University and a Bank Association - focus on the basics. The Bank Association provided the space (free) - an unused bank office, the Municipality provides the annual budget of operation, while the University contributes with its network, occasional access to its research facilities and capacities, and of course with a healthy stream of aspiring startuppers from the university. CesenaLab has a digital and media focus.

“We have a rolling application process”, explains Roberto, the manager, who can be easily mistaken for one of the young entrepreneurs.“We accept companies as well as private individuals with nothing more than just a good idea. We ask applicants to give a pitch and show us their vision - what they want to achieve. We look for 3 things”, Roberto highlights: “most importantly, we want to see the passion - that the person is really committed and believes in the idea. Secondly, we look at the team - who they are, what they want to achieve and do they have what it takes to be an entrepreneur. Finally, we certainly look at the idea - how innovative it is.”

When an application is accepted, CesenaLab provides the following services, free of charge for a nine-month period: 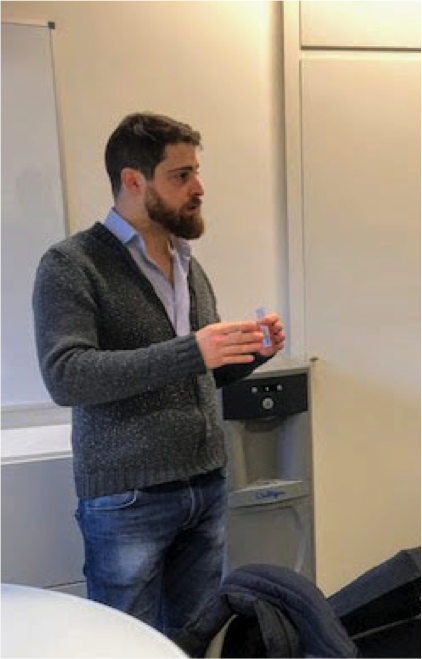 In return they only ask for one thing: when the company leaves CesenaLab after 9 months (usually as a fully functional enterprise), it has to stay in Cesena. “Nothing fancy”, says Roberto, “and if it sounds simple, it’s because it IS simple. But our experience - and the example of over 20 successful businesses which we have raised in CesenaLab in the past 4 years - shows, it does work. We may not grow unicorns like they do in Silicon Valley or in other startup hotspots around the world, but the companies we help are successful on an Italian scale, many of them with potential for international expansion - and most importantly they help to retain bright minds in Cesena. What we painfully lack, is one of the key conditions of further growth of the businesses after the initial phase - the availability of venture capital.”

Most of CesenaLab “residents” I have spoken with agreed, that the support they received had been crucial. As one of them put: “When we got here, we were three enthusiastic geeks fresh off from university. CesenaLab helped us to become entrepreneurs.”

In addition to the support, however, the biggest value lies in the power of the community: people working at the 10 companies CesenaLab hosts at a time form a diverse group, with a wide range of knowledge and skills - and they help out each other on a daily basis. At lunch time almost everyone gathers around the big table in the centre of the open-space room and spend time together; there’s animated discussion, young people sharing ideas, solving problems together, and telling jokes. It is lively and noisy - just like a big Italian family - but it is probably one of the reasons these aspiring entrepreneurs love to be here.

Fabio is a marine biologist by profession - and a serial entrepreneur, building businesses around his passions. One of his many passions is music - more precisely rock music - and he is an avid fan of one of the greatest rock bands on earth - Foo Fighters. 3 years ago, he wanted to invite his favorite band to come and give a concert in his hometown, Cesena. Since Foo Fighters only normally perform in big city stadiums, Fabio knew that any old invitation would not cut it. So, he started to work on a dream: he collected money through crowdfunding, and then organized Rockin’1000 - 1.000 musicians - amateur and professional, male and female, young and old - gathered in Cesena to play together just one song - “Learning to Fly” from Foo Fighters.

At the end of the video capturing this wonderful and moving community moment Fabio presented an invitation to Foo Fighters. The video went viral and quickly accumulated over 40 Million views - and soon Dave Grohl of Foo Fighters sent a video message thanking for the beautiful video and saying (in Italian) “We are coming. I promise”. And they did - Fabio’s dream came true on November 3 2015 when the band gave an intimate concert to 3.000 fans in Cesena.

Fabio’s company built around the concept of Rockin’1000 is now a resident of CesenaLab - and together with his small team he continues to make the dream of amateur musicians come true. They organised a show of the Biggest Rockband on Earth - 1.200 musicians from all over the world performing to an audience of more than 12.000 in the Cesena stadium, produced a record of the show, organized a summer camp for musicians. As Fabio insists, however, Rockin1000 is not an event organizer - its building a worldwide community of musicians.

What can we learn from CesenaLab and Rockin’1000? 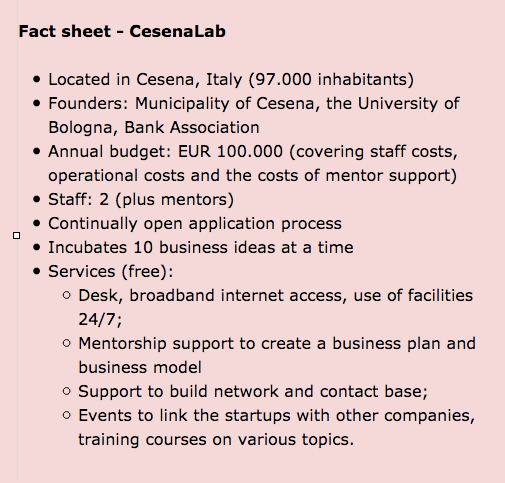 The inspiring example of these initiatives show that all towns and cities – whatever their size and location – can reach for the stars and achieve big things. What is needed is creativity, ambition, energy and fun - and CesenaLab has all of these in spades.

It does not have to cost a fortune!

The example of CesenaLab also demonstrates, that developing the digital economy does not require fancy solutions and expensive infrastructure – it is much better to start small and get the basics right: the combination of a functional space, committed staff and the right assistance can lay the foundations of a digital ecosystem.

It is the collaboration, stupid!

It was clear from all the discussions we had with the passionate entrepreneurs of CesenaLab, that having the basic infrastructure is important, just like getting support from experienced mentors. What they valued most, however, was the collaboration with other businesses.

What can you do in your area…? 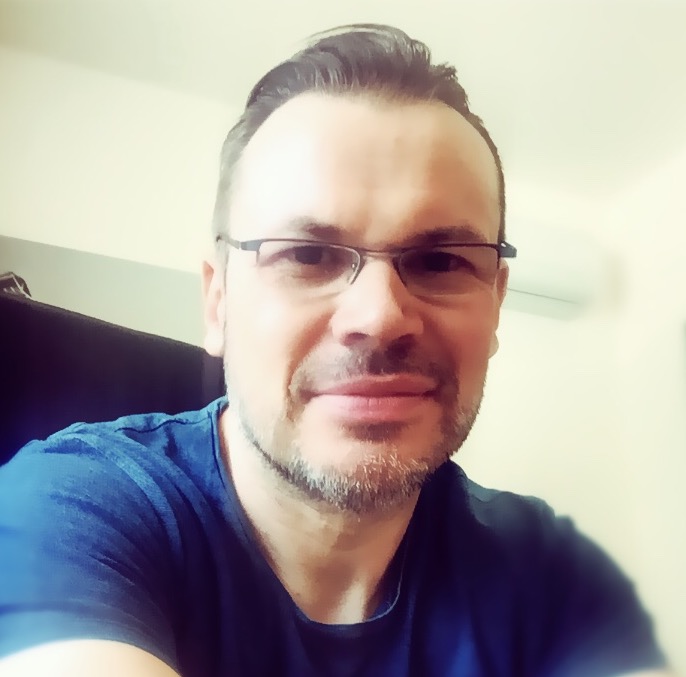