Vienna (AU) is famous for many things: classical music, exquisite architecture and good cakes too. Less well known is its reputation as an exemplar city for gender-sensitive urban planning: The city has over 25 years’ experience of gender mainstreaming; the Women’s Office opened in 1992 and, the city has developed a network of gender experts and champions across its departments. So, where better to host an URBACT expert exchange event than in the Austrian capital?

The meeting took place in the context of URBACT’s Gender Equal Cities Knowledge Hub initiative that aims to highlight ways in which cities are driving change through gender sensitive policy making. At the heart of this work is knowledge sharing, so in October the team travelled to Vienna for a 3-day workshop. We were joined by gender equality experts and practitioners from cities across Europe including Athens (GR), Umea (SE), Venice (IT), Paris (FR), London (UK), Villiers le Bel and Poznan (PO) as well as networks such as CEMR, ALDA, Genre et Ville, all willing to share a wealth of knowledge about driving this agenda at local level.

Learning from the best

We were fortunate to be hosted by the City and shown around by Eva Kail, Gender Planning Expert and Ursula Bauer, Head of Gender Mainstreaming.  Their detailed explanations enabled a deep understanding of the gendered nature of urban space and governance, within the concept of a fair-shared city.  We also heard about the structures and processes that Vienna has put in place, and adapted over time, to address the challenges.

During site visits we looked at:

This study visit around Vienna emphasised how gender-sensitive planning has many overlaps with other policy areas. For instance, more walk-able, greener cities that respect sustainable mobility principles benefit everyone.

In designing these measures to improve safety and mobility for parents, the city of Vienna is careful not to reinforce the idea that women can only be either mothers or victims. They are combining these hard measures that stay true to the everyday experiences of women, with soft measures that challenge stereotypes. Their gender equality actions are not just about women but about changing damaging notions that impact us all: by encouraging fresh thinking about men and women’s places in the city Vienna is combating gender-based exclusion at every level.

What do we mean by gender mainstreaming? Gender refers, not to our biological sex as male or female, but to socialisation as either woman or man. Gender-sensitivity is therefore evaluating the impact of policy on different genders and acting to ensure the equality of this impact. Mainstreaming refers to evaluating the impact of all policy, not just so-called ‘women’s issues.’ Mainstreaming gender is increasingly common practice internationally and means thinking about how stereotypes of femininity and masculinity operate as a social structures in all areas, sectors and levels of city policy.

The intense thematic exchange covered many areas of opportunity for cities to make a change.

Vienna, like many European cities, faces distinct challenges from diminishing public spending.  The role of the Women’s Office is to advocate for gender sensitive policy even with limited resources, and also to make sure each neighbourhood and department publishes gender budgets, so that if services are cut there is a proper impact assessment of what that means for women and men.  The significance of EU funding was flagged here. When funders include assessment criteria on gender and diversity, it provides a helpful stimulus to embed equality measures. The answer from Vienna? Do more with less. Although there are no quick fixes to gender inequality, there are small inexpensive measures the city can put in place to improve representation, safety and access in public spaces: better street lighting, quotas for elected representatives and participatory processes that involve women is all examples of this work in action. 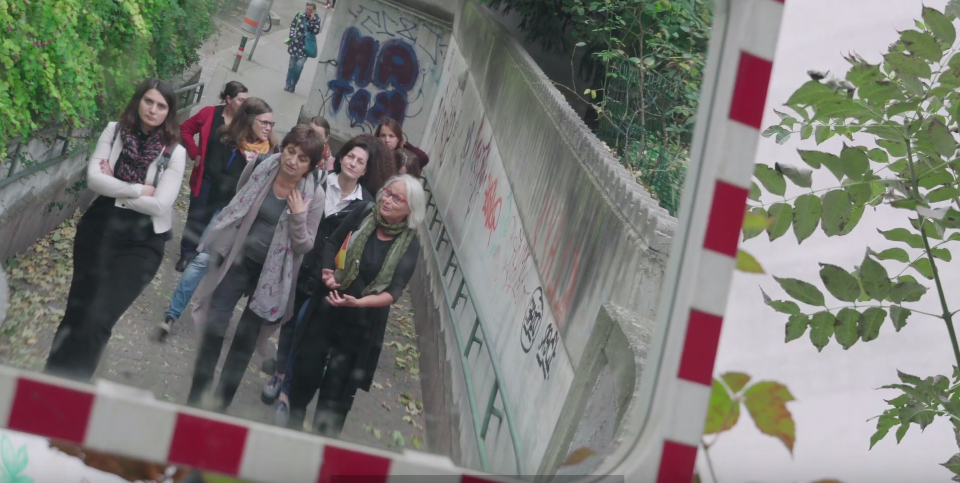 Gender sensitive participatory approaches mean recognising the particular expertise on equality that women’s networks and experts can bring to the table across policy areas. NGOs and associations in cities across the EU work closely with women from all backgrounds, socio economic groups and ages.  They are uniquely positioned to articulate their needs and feed into policy making that is more impactful. Likewise, there are many universities and research agencies that have gender departments or expertise that can contribute with supporting knowledge. The Vienna team acknowledged that often these partnership dynamics are not without tension, as agencies will rightly push for better services, for change and hold the city to account.

As in Lisbon earlier this year, gender disaggregated data and the significance of representation were high on the list of our experts’ priorities. We need data broken down by gender (amongst other indices) to best understand how women and men experience the city differently. In Vienna we learnt how both quantitative data and qualitative approaches such as social space analysis had underpinned their plans. Without this knowledge, attempts to solve the problem can be misguided. For example, qualitative data collected in London suggests that women and particularly women of colour do not feel represented by the advertising in their city. So, London’s mayor is featuring all women artists on the underground for 2018 and hosting a competition for representative advertising campaigns. The winner will receive free advertising on the underground for a year!

Representation and equal pay also continue to be problems in a Europe where just 15% of mayors are women and women earn on average 17% less than men. We need 50/50 representation at all levels of local governance: this isn’t just a democratic imperative and a human right, it also makes for better urban policy when all experiences of the city are factored in to decision-making. Participants in Vienna suggested quotas as a temporary solution to the problem, but only when combined with mentoring, training and incentives to get women into local office and high paying roles, and keep them there. Quotas alone won’t change traditional, male dominated cultures that haunt politics across Europe, so it is not just about getting women through the door but empowering them to be true to themselves, to feel confident in introducing new styles of leadership.

It is clear that women and men do not all experience the city in the same way based on their gender, and experts discussed how to better incorporate plural voices. Other identities including race, class, religion, sexuality and abilities also impact citizens’ everyday lives. As Linda Gustafsson, Gender Equality Officer for Umea put it “we have to always think about gender in the city, but we cannot only think about gender in the city.” Gender affects all citizens in one way or another but reacting to data while not reinforcing stereotypes is one of the hardest challenges faced by policy makers and planners working on equality.

One thing was clear from the workshop in Vienna: when it comes to gender equality, supportive spaces to network, co-create and share are crucial. Ultimately, gender equality is about changing centuries of discrimination that in 2018 simply hold back cities and all their citizens.  It is complex and multi-faceted and transformation requires a long term, strategic approach. A key part of this process is capacity building about how gender impacts the city and the unique opportunity it has to change this. Our experts from across Europe testified to the success of structured learning programmes, unconscious bias training, webinars, role play and theatre to help the city lead by example in its approach to gender equality. Communication across European networks is also important to connect gender equality to different urban issues. URBACT has a unique platform for change thanks to its reach into 500 cities.

Finally, everyone can support change-makers in everyday life: lift women up, call out inappropriate behaviour and advocate for change. If you’re a man and offered an opportunity to speak on an all male panel, how about recommending your female colleague? The same for white women asked to speak on all white panels. These are small acts that can make a big difference.

What’s next for Gender Equal Cities?

URBACT is very grateful to the city of Vienna for hosting the exchange as well as to all the experts for contributing with passion and honesty. The URBACT Programme is now reviewing how it can improve its own performance on gender equality in networks, capacity building and knowledge hubs. If you are interested in learning more about gender equality in the city please join the Gender Equal Cities LinkedIn group and keep your eyes peeled for our report to be published in early 2019 in partnership with Council of European Municipalities and Regions (CEMR).

Submitted by Sally Kneeshaw on 20 December 2018