How Arad engages its citizens in creating spaces for people

Arad is home to 176,000 inhabitants and its locations very close to Hungary as well as close to the Serbian border. This setting gives Arad a key position for international road and rail connections including a TEN-T core network corridor directly crossing the city. Arad is currently in the process of implementing its first Sustainable Urban Mobility Plan (SUMP) and simultaneously updates its SUMP for coming years. Recent achievements in urban mobility created Romania’s largest urban cycling network of more than 150 km and ample public transport networks reaching out to the city’s peri-urban areas. Works for a sustainable urban transport service continue and will see further upgrades to its public transport network with new vehicles, new lines, better stops and traffic management as well as an extension of the cycling network and the creation of pedestrian areas.

One of today’s the main objectives is to revitalize its city centre. The idea is to reconsider and redistribute public space from a car-oriented design to a space for people approach. Arad applies an extension of pedestrian spaces, the creation of a pedestrian network and parking management as the main tools to vitalise its city centre.

Working with parking spaces is known as one of the most sensitive aspects in urban mobility planning. It needs a careful approach that well communicates why changes are considered and what benefits they will bring to whom. In Arad’s case, the reasons for the change are explictly clear – the creation of a walkable and liveable city centre. However, transporting the message and involving people are key to success. In this light, Arad organised two citizens’ engagement events and a public survey in August 2021. The idea was to gain a better understanding of people’s needs and preferences for improving pedestrian spaces in the city centre.

The first event 20th -22nd of August 2021 encouraged citizens to provide their own ideas for better pedestrian spaces and to propose more pedestrianization of streets in the centre. This participation event was embedded to a pilot intervention on Revoluției Boulevard that closed the eastern part of Arad’s main avenue to traffic over the weekend. The second event 27th-29th of August 2021 was a co-creation exercise where people selected activities or amenities from multiple options and mapped them in the central area. Both on-site activities were complemented by an online survey about attractive pedestrian spaces in the centre of Arad available for everyone between 20th - 29th of August 2021. A total of 55 ideas and opinions were collected and 128 people replied to the survey. 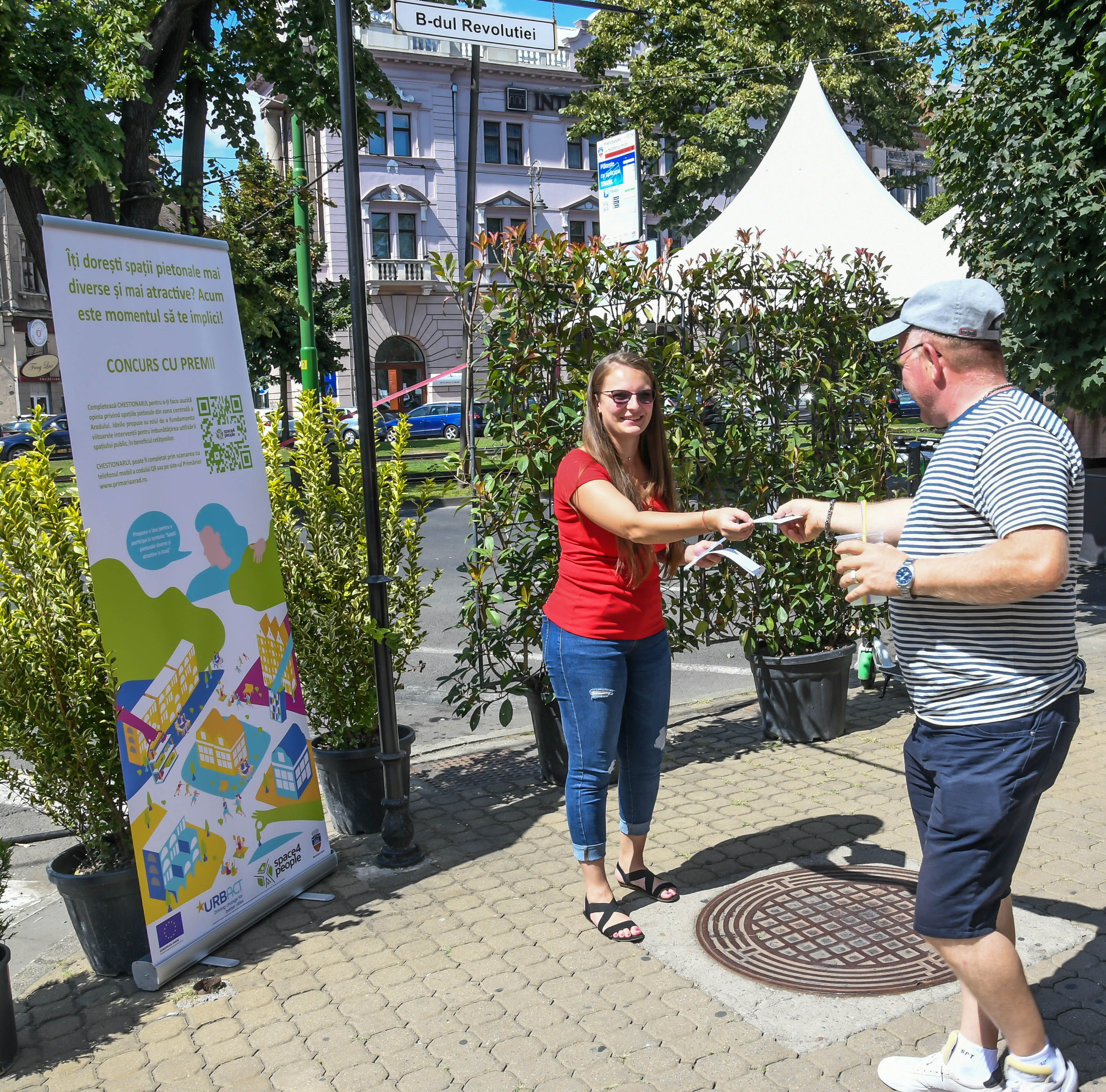 Results of the survey highlighted that people’s modal choices when travelling to the city centre do not differ from their choices when travelling in the rest of the city, though the central area is better serviced by public transport and the public space is more still generous for pedestrians compared to other parts of the city. Despite this better accessibility of the city centre, 25% of respondents use active modes, 19% travel by public transport, while the majority, 55%, travel by car either as a driver or passenger.

Respondents were enthusiastic about extending the pedestrianization process in the central area, either on selected streets or directly the main avenue Revoluției Boulevard: 82% asked for pedestrianisation measures to the boulevard. Some specific areas of the boulevard were particularly highlighted, such as the area in front of the City Hall and the section between the Classical Theatre and the City Hall. Adjacent streets in this section, Unirii St., Lucian Blaga St., Vasile Goldiș, all close to the Classical Theatre, were proposed by most respondents for full pedestrianization. 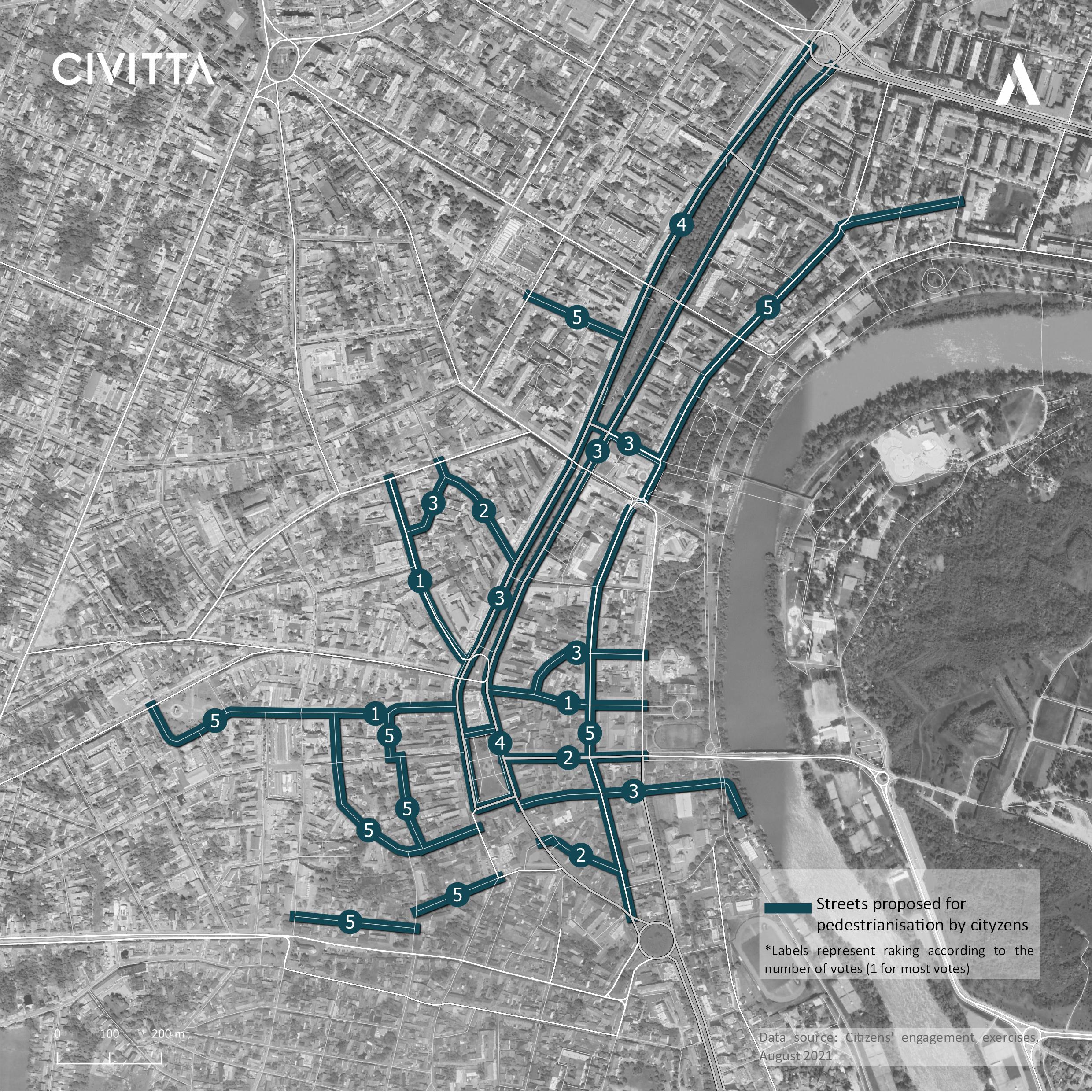 Revoluției Boulevard is a major traffic artery but also an important public space for the city. To find the best intervention for it, three options were presented to the citizens:

The pilot closure of the Boulevard left a good impression on people, since a wide majority of respondents (80%) wants to see interventions to the street, with the most preferred option of a full pedestrianization (35%), followed by partial pedestrianization (32%) and third only eliminating parking spaces (13%). 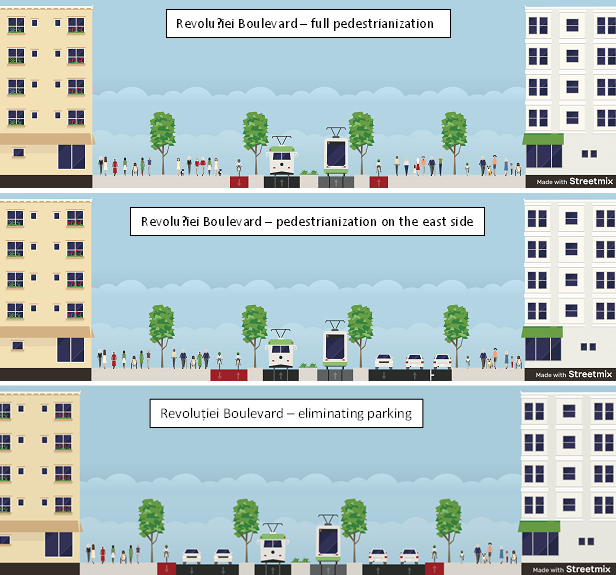 The co-creative exercise end of August 2021 added further ideas to the pedestrianisation preferences: Local could indicate any idea of theirs and pinpoint these to a map of the inner city. The most interesting places for improving public spaces were Revoluției Boulevard, the City Hall area, Avram Iancu Square, the Mureș promenade and four central parks. Ideas centred around on-street cafés, restaurants or food trucks for the central area as well as amenities like street furniture, pavement variations, lighting and greeneries as well as shaded resting spots to create attractive public spaces.

The Revoluției Boulevard was of highest interest for the proposals: 24% of ideas focusing on it. Citizens, most likely inspired by the pilot pedestrianization of the boulevard, want to see more food trucks or beverages kiosks, lighting decorations, benches and pergolas and shaded spaces. Also, they want to have more cultural events or festivals. The highest need for shaded areas on the boulevard, according to respondents, is in front of the City Hall. Other proposals for Revoluției Boulevard include: street art, bean bags, street chess, on-street word games, children’s library, craftsman kiosks or flywheel market and water fountains.

Based on the lessons learned during the engagement activities, the local Space4People team plans future sustainable mobility events in the city centre. Stay tuned for future information on Arad’s public spaces and the city’s actions for making them more attractive!

Submitted by Claus Kollinger on 16 November 2021