The meeting took place in Turin, in a two-days virtual format, with the contribution of two innovation experts, Charles Landry and Amalia Zepou, and an internal session dedicated to the comparison between the partner cities.

“Everybody's an innovator: two years of experiments in innovating the city” is the title of the conference that closed the Innovato-R experience.
The meeting was still held on Zoom, for the containment measures due to the pandemics, and was organized by Turin, the Lead city of the project and it consisted of two mornings of speeches and discussions, May 19th and May 20th, 2021, the first public and the second reserved for the representatives of the partner cities.

As Sgaragli pointed out, the meeting was aimed at reflecting on what has been done and what has been learned in these two years of the project.

“It is essential to compare our vision of the future with that of other cities - said Marco Pironti - innovation is not a choice, because it takes place both with us and without us. The real challenge for our cities is to innovate with our human resources. All civil servants can compete in the organization's arena, with everyday activities. "Everybody's an innovator" must be a milestone in our innovation path, thus guaranteeing the widest access to the process for all employees in the city".
Pironti went on to paraphrase the claim of the 2006 Turin Winter Olympic Games: “Passion Lives Here” is transformed into “Innovation Lives Here”. The time has come to think Out of the Box and to stop wondering what your organization and your city can do for you but what you can do for your city and your organization”.
Great satisfaction was expressed by Eddy Adams, URBACT Secretariat, for having been involved in the path of Innovato-R from the beginning. 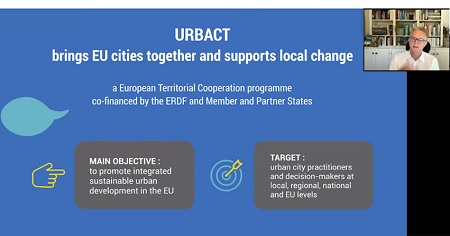 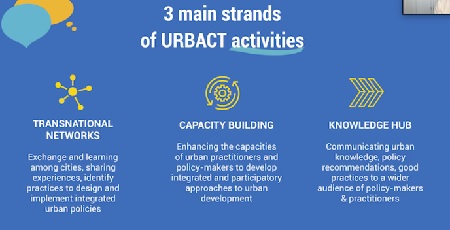 The lesson learnt. What worked well: “Powerful Lead Partner sharing the knowledge and experience from the Good Practice. Lead Partner and Lead Expert relationship, building complementary skills. City partner's willingness to learn and motivation to experiment. Co-produced methods and tools with partners and co-produced ambition”.
What worked less well: “Staff changes at the city partner's team. Legacy barriers to ensure the sustainability. The uncanny number of program deliverables (also the vox-pops effect). An unexpected global pandemic...”
URBACT cities show their resilience and, in return, the program improved people's digital skills.
“In conclusion – said Adams – transfer has been shaped by simplicity. The process of understanding, adapting and re-using has been considered highly effective. Transfer Networks have proven to be different from all previous URBACT networks, with their own tools as a success factor. Transfer happened at different speeds and in different ways, depending on the nature of the Good Practices. Transfer Network are about people and the dynamic that exists between them, the leadership, motivation and willingness to learn”.

“The reason for Innovato-R is to bring the principles of innovation into the PA. Innovato-R is a simple tool, easy to adapt and replicate. The stimulus we can give to public employees, who are also citizens, and have, in this double capacity, a perfect vision of the needs of the city is fundamental. To stimulate this change it is necessary to change the policies on the human resources of the cities, highlighted in his greeting Fabrizio Barbiero, Project Leader Innovato-R.

Author of “The Creative Bureaucracy”, speaker and international advisor, the first of the two guests of the “Innovative City” panel was Charles Landry.
“Innovation does not come from a leader that everyone follows like sheep but comes from everyone. In times of crisis it is easier for innovative processes to be triggered, because one realizes that the way one had of thinking and doing no longer works. We need changes, innovations - Landry began - We need to be circular, inclusive. Creativity is not just something for artists”. 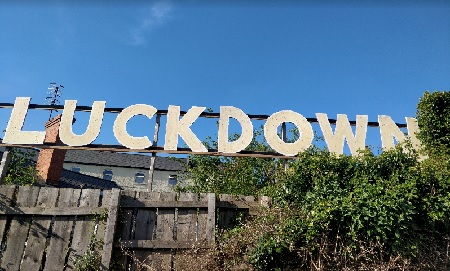 “Dilemma are the decline of the common good, the rise of wicked problems, the market on its own cannot solve it, the solution is a collective endeavour. We need build a better bureaucracy and create another bureaucracy, a new organizational type”.
Landry explained the concept of Creative Bureaucracy: “Two words seemingly in tension. We have to recapturing the positive values that are part of a bureaucracy. We need to move from ‘no, because’ to a ‘yes, if’ culture”. 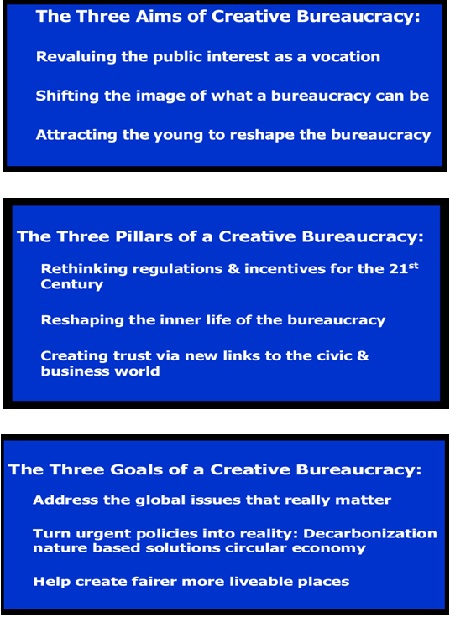 Landry concluded by stressing the importance of having a flexible way of thinking, because one cannot know what may happen, what the future may hold.

The second guest was Amalia Zepou, founder Kollektiva NGO. “We mustn't talk about obstacles. In Athens, during the 2011 crisis, as a municipal administration, we collected on a shared platform, all the innovations that were happening in the city, by the citizens. Everyone looks for solutions when things don't go well. The problem is the change of mentality. Not everyone shares the concept of innovation”. Zepou made some comments on Innovato-R: “The first is that it is necessary to understand the term innovation well. The second is that things work if there are already established projects on which to lay the foundations. Examples come to us from Cluj Napoca, Paris, Rotterdam, Veszprém. The problem is that not everyone is open to innovation, in fact we found a low percentage of participation in this call on innovation. Asking for innovation in the context of one's work creates a lot of expectation and can cause general stress for those who propose innovation”.

In order to encourage innovation - according to Zepou - it becomes necessary to change the policies of human resources in the Public Administration and encourage and stimulate people to change their way of thinking: "It is not a question of transferring knowledge, but rather of directing, providing support each other. Unlike in the private sector, in the Public Administration we do not find figures who stimulate and encourage human resources”.

As the Council Member for Innovation and SmartCity, Municipality of Turin, Marco Pironti said at the beginning, Zepou also underlined that: “Change happens anyway, the question is how much to accompany and direct this change. The transition must certainly be simplified and to do so we cannot keep on board those who hinder and do not believe in innovation”.
The founder Kollektiva NGO concluded by highlighting the tension that has been created between the need to innovate and the pressure that the pandemic has generated in the public sector.
Fabio Sgaragli closed this first part by presenting the paper he co-authored with Pietro Elisei: “Everybody's a innovator: two years of experiments in innovating the city. The legacy of URBACT network innovato-R” (download the report).

The speakers were the following: Sabina Leopa and Oana Buzatu from Cluj Napoca, Kasper van Hout from Murcia, Eloy Lafaye from Métropole du Grand Paris, Maria Andrade from Porto, Jochem Cooiman from Rotterdam, Renata Kiss from Veszprém and Michele Fatibene from Turin.
The works were closed by Nicola Farronato, Head of Innovation, Municipality of Turin: “The lesson we have learned is 'Think small ... Make it big'. We have set up the possibility of creating new solutions”.
The second day was dedicated to an internal meeting for the presentation of the updates from all partners, outputs and deliverables, budget and finance, sustainability of the action and capitalization.