The online workshop reviewed the conclusion of the five winning projects and analysed how to combine bottom-up change with top-down change.

On 23 April, took place the online workshop, organized by the City of Turin, titled Practices and models of innovation in local Pas: the experience of the Innovato-R project.

The works were introduced by the Councilor for Innovation of the City of Turin Marco Pironti, and the Project Manager Innovato-R Fabrizio Barbiero.
"This is a real 'Armageddon' - said the Councilor - the innovations introduced by the project will change the prospects of work in the PA and will give voice to an approach that starts from the bottom, from those who must put things into practice. Now we have no more excuses, thanks to the funds of the PNRR our innovative ideas must find fulfilment".

The workshop was moderated by Fabio Sgaragli, Lead Expert Urbact project Innovato-R: "This webinar celebrates two years of network activity, to transfer good practices from the leader Turin to other European partner cities".

The seminar came to life with the first section "Cities that innovate" and the report of Professor Piero Formica, writer and academic, active in the field of knowledge economics, lecturer at the Maynooth University-National University of Ireland.

"Ideas mean productivity - said Formica - because when they become discoveries and innovations affect production. Since school, the sense of ideation is somewhat lost, because knowledge becomes a dogma. Teaching is passive, learning is active. We need schools of the 'I don’t know' and if something is not done, it is not understood, we are looking for solutions, which are transformed into ideas and innovation. The same process happens in the world of work". Formica sends an alarm signal about the relationship with nature. "We think too much about GDP. Cement instead of green can increase GDP but impoverishes biodiversity and does not help man to live better, the Covid-19 pandemic teaches. Municipalities should pay more attention to services, nature and land use.

The academic intervention was underlined by Sgaragli: "The relationship between sustainability and the way of considering urban and economic development is of great importance".

This was followed by the reports of Simone D'Antonio, journalist and expert on sustainable urban development, ANCI’s contact person for the national point of the URBACT Italia programme, and Pietro Elisei, European Commission innovation expert.

D'Antonio stressed the change introduced in the PA by projects such as Urbact and Innovato-R and the comparison that they have established between Italian civil servants and civil servants of other European states. "The latter have a different concept of public service and utility of the PA. We need new blood, young people, in the Italian PA, to bring innovation. To do this we must improve the system of public competitions for the recruitment of staff".

Elisei’s innovative speech: seven concepts in seven minutes, expressed in seven slides, which highlighted the evolutionary and revolutionary character of innovation, the importance of a Global Governance to govern Digital Change, to enable all cities to benefit from Smart City strategies, to invest more in those who work in the PA, to organize and catalogue the data - the so-called Big Data - and finally the consideration that "in Innovato-R everyone is an innovator. This creates a horizontal network in which every node, formed by the civil servants, can express itself and interact. This is the right direction for the reform of the Italian PA". 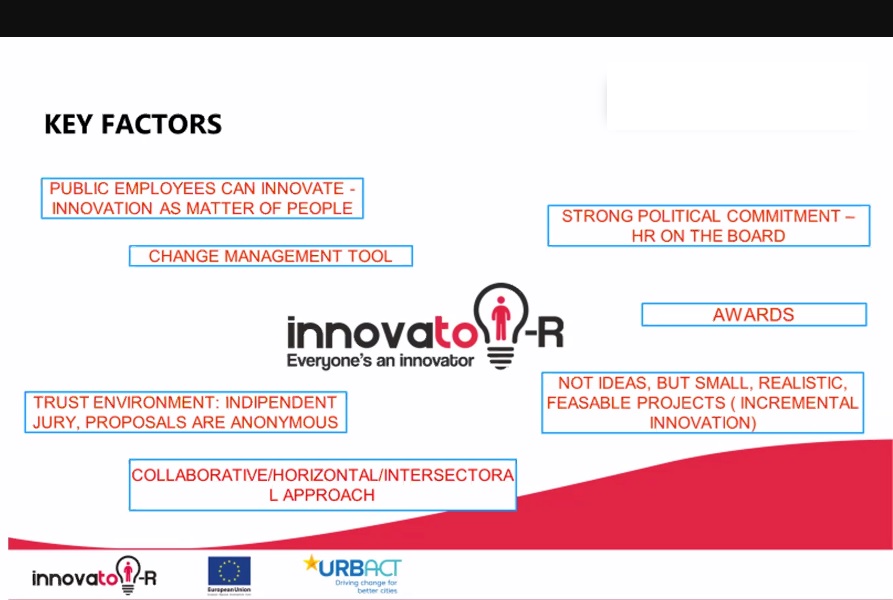 The second part of the workshop It's possible to innovate, moderated by Michele Fatibene, Innovato-R Local Support Group Project Manager of the City of Turin, presented the conclusions of the five winning projects, within the municipal administration of Turin, of the Innovato-R project.

Architects of the Relationship (described by Fulvia Mantino) started from putting at the center of the core business of the Social Services of the Municipality the relationship with the user. The choices of colors and panels allow an inclusive path of the citizen who addresses Social Services. "Innovating is also doing better than what is already being done". 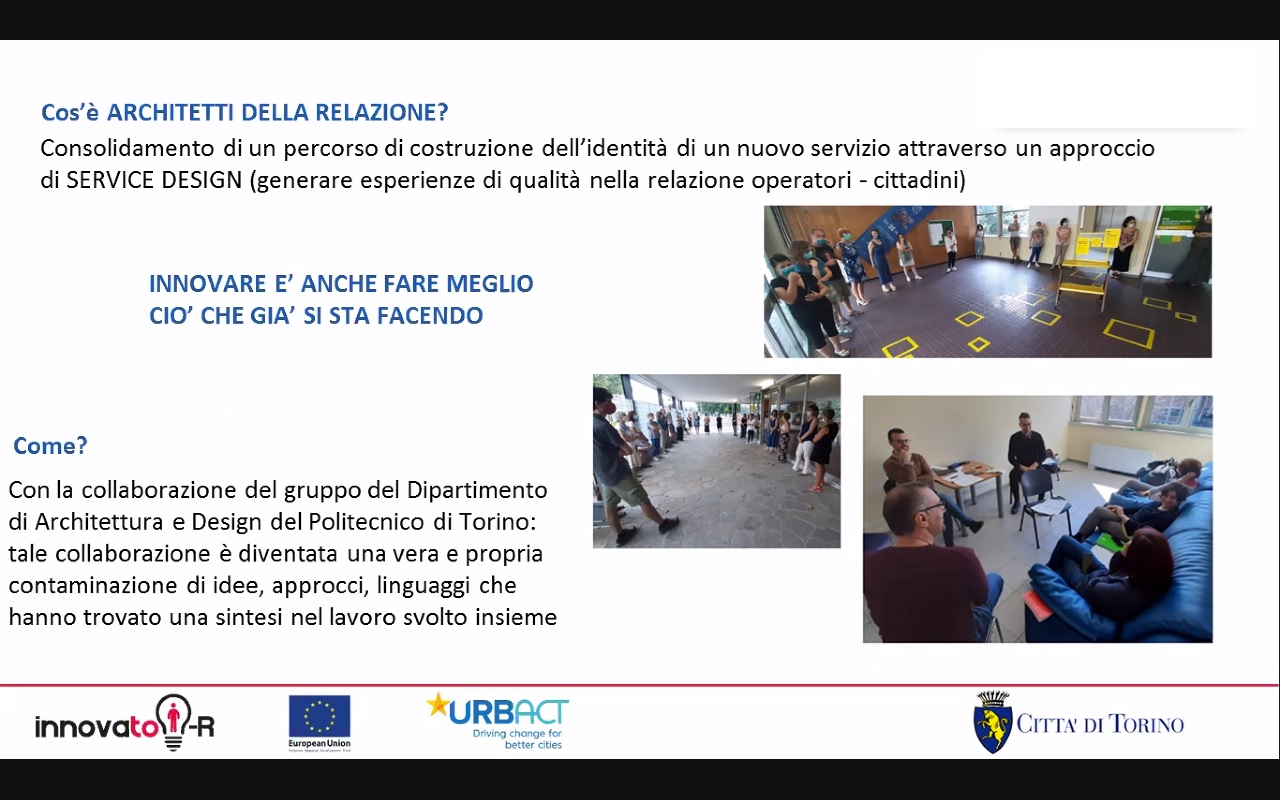 PHOENIX 4SW - Pilot Habits Observation for Environmental NewIndeXes 4 Smart Working (described by Lucia Gallo) examined and stimulated sustainable behaviour among colleagues. The project was launched with the aim of implementing actions to raise awareness of energy saving through new ways of direct and active involvement of employees, in order to promote the virtuous path of the City of Turin towards environmental management systems. The entry into smart working because of the Covid required the remodulation of the project and the name change to "Phoenix" (Phoenix) as a symbol of rebirth: the ability to rethink and reconvert a job in the light of new circumstances. The data emerged from the study have allowed to highlight the economic and environmental benefits resulting from the reduction of power consumption in smart working. 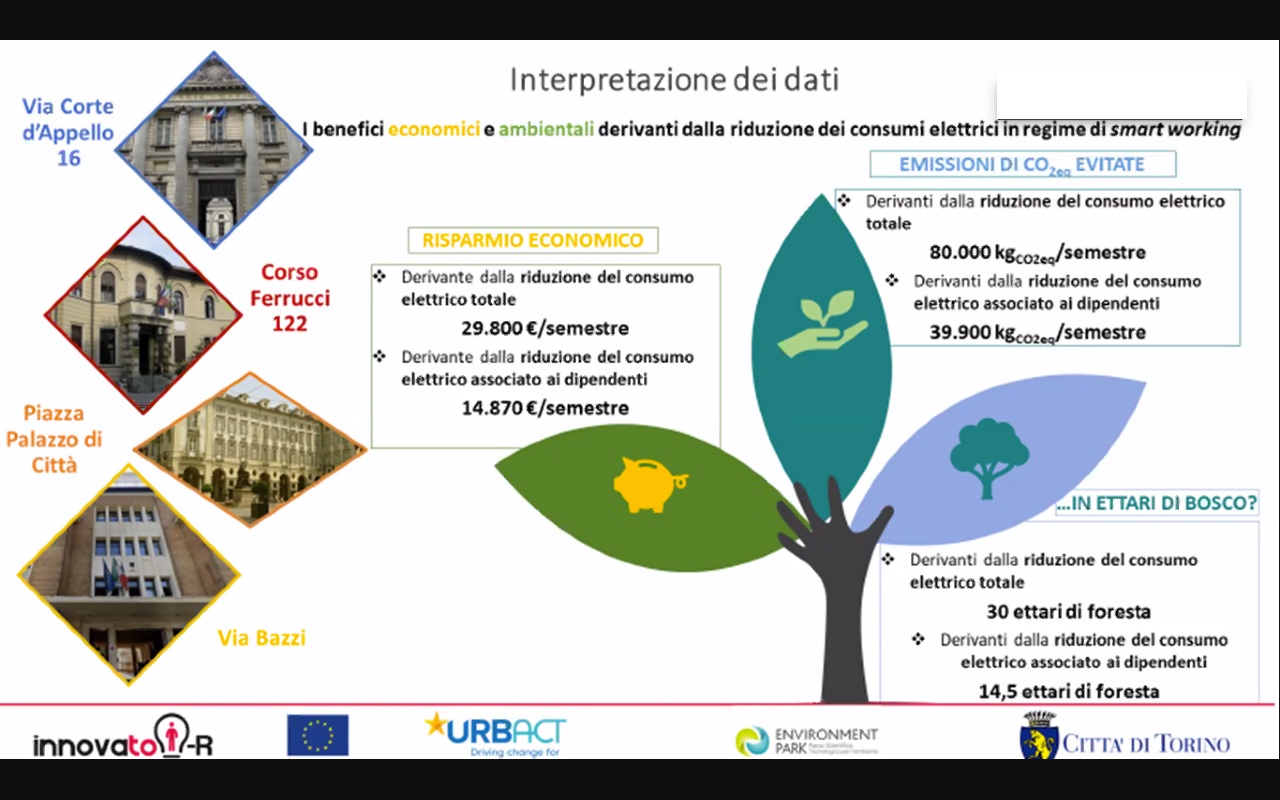 The Precious Legacy (described by Maria Antonietta Ritrovato) highlighted the importance of the processes of generational interchange in the rotation of civil servants and the transmission to new recruits of the know-how and skills of a working life, so as not to disperse the experience acquired by those who retire.

From Talk Outside the Box to Think Out of the Box to the Life Cycle of the Employee (described by Marina Bua) started from the consideration that working groups of the same Area speak different languages and communicate badly, making it difficult to share processes and their optimal functioning. This led to a training course focused on design and representation of processes, based on knowledge and shared methods. It is based on three challenges: "Getting started", "Knowing you don’t know","From thought to act, putting old and new ideas in a new order". 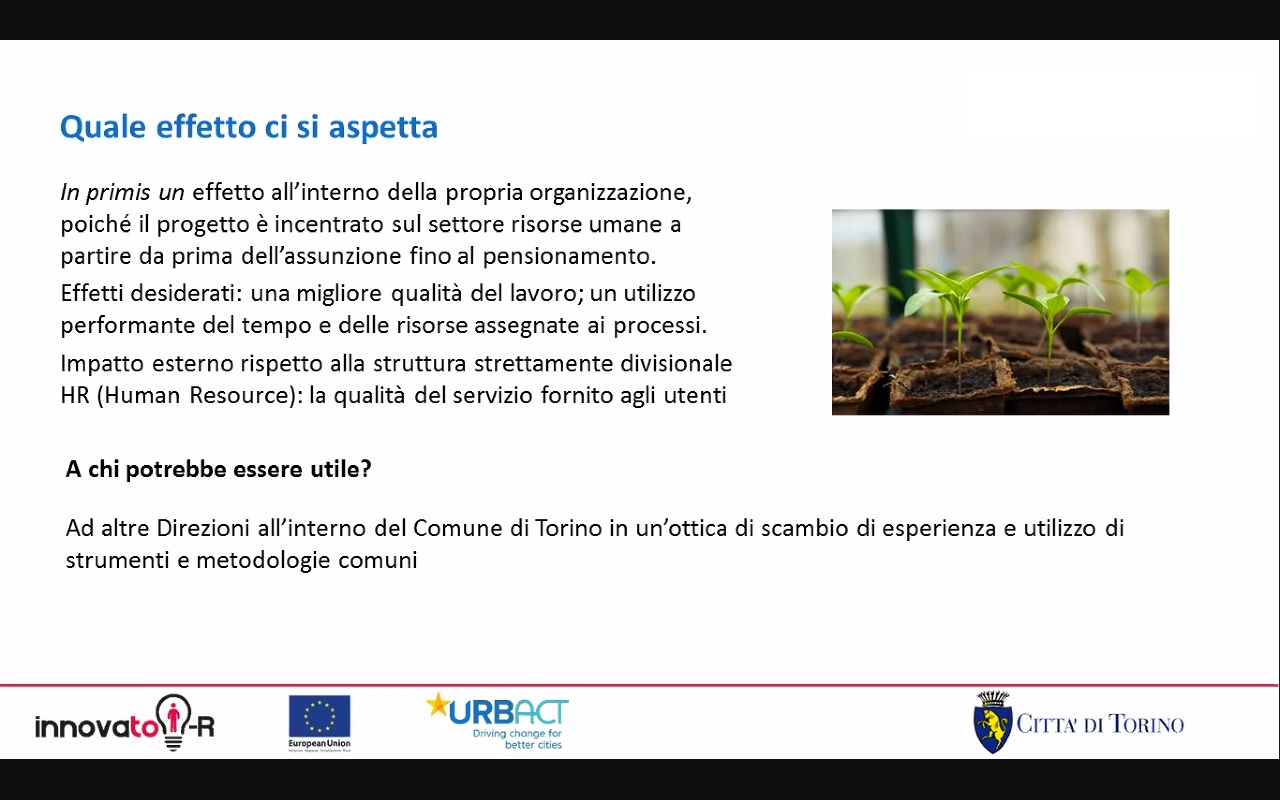 Borgo Open (described by Rita Principale) refers to the Medieval Village of Turin, whose management was passed by Fondazione Torino Musei directly to the City of Turin, in April 2018. We immediately realized the need to have a new website, more interactive, usable from smartphones, with news easily updated by the office in charge. A winning choice also to the outburst of the pandemic, that has allowed to continue to visit the Borgo in a virtual way and, in reason now of the works of restructuring of the Fortress, in order to allow to continue to use online the museum spaces.

The webinar ended with the third and final part The perspectives of innovation of the PA: an exchange of views between Gianfranco Presutti, Director of the Projects Department of Community and National Planning of the City and Mario Spoto, Secretary General of the Municipality of Turin.

"Innovation-R has allowed proposals for improvement to emerge from a bottom-up innovation. How can one combine bottom-up innovation with that coming from the top of the organization?" was the question asked to Spoto by Presutti. "We reorganized the organizational positions precisely on the basis of the 'What you propose' in addition to the "What you can do', therefore asking for innovation in intermediate positions and we had a positive feedback, despite the middle-high age of these responsible figures. We noticed their desire to get involved and innovate". Spoto concluded by recounting the improvements made, with an innovative approach, to demographic services and protocol and stressed the importance of the Project "1000 young talents", which will bring new life - and incentives for shared innovation - in the municipal offices.

The conclusions were entrusted to Councilor Pironti: "We cannot delude ourselves that the change is rapid, but it was important to reverse the trend and start with these first virtuous processes .The pandemic has certainly shattered convictions and firm points on the work of everyone and, in spite of it, led to an unimaginable development of smart working: this aspect seen from the side of innovation will lead us to a new future, different from what we have left".

It is up to good policy and good policy to coordinate to ensure that this future is better than what we inevitably have left behind.

Watch the video of the 5 winning projects.

Submitted by Valeria Tarallo on 29 April 2021