"The Innovato-R Transfer Network links very nicely to our existing activities and approach in Rotterdam. Social innovation is in the DNA our city, and the project has been a key opportunity to further this, and embed it within a wider set of stakeholders, including businesses and the university."

In the summer of 2018 we got a message from Platform31, the national URBACT point. The message had an invite form Turin, asking cities to join their Transfer Network on considering everyone an innovator. After a few calls with Fabio and Fabrizio, amongst others, we decided this TN was a great way for Rotterdam to learn about their method. It also gave our premature digital platform a kick-start, a breath of fresh air.

What came before Innovato-R? How did we get connected? This was all about a platform to support our innovationNetwork Rotterdam (around 2.000 civil servants and 500 external partners). We already offer them physical and social contact points. A digital place for contact, to share ideas, challenges or just to learn from each other is not yet in place. Thus, we co-designed an idea in 2017 for such a digital platform, which we created in 2018 as a first iteration (later knows as minimal viable product no. 0).

The European journey started in la France, en Paris. Un bon journee avec notre dame avec bonne sante. We experienced the city and its story, its Station F, but also each other. MVP's came by quickly with some lessons on avoiding unnecessary waste during the design process, to build something that is complete, even though not 100% grown-up yet.
The program in speed-fast-forward: welcome, expected network outputs, objectives and key success factors, ULG, Station F, good practices and local transfer plans, communication (transfer treasure box, diaries, voxpops, stories = Basecamp), lean design methodology, MVP, of course all of it SMART :) We als got to know each other better. Our great guides, Fabio and Pietro. Our wonderful Torino examples, amongst them Fabrizio and Michele. But also the other partners, like challenging innovative Cluj, cultural Veszprem, social Porto, grand thinkers of the Metropole and like the driven and participative forces from Murcia. 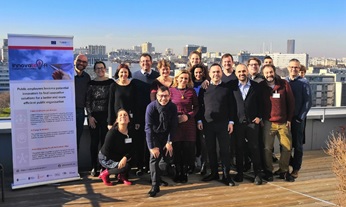 In Rotterdam we prepared the journey based on the lessons we took from Paris. We needed to get our plan together, building a digital platform for our innovation community. We dusted off the digital platform we had built in 2017 and looked back on why we had gotten started with it in the first place. For whom did we wanted to build the first MVP, what requirements did it have, but more importantly, who did we need to join in?
Our local support group also had their first real dive into Innovato-R. The first sessions were about what the ideas were that Torino had in the first place, about the process and planning of the project, about what an MVP is and on how to build it. Towards the next TN we had finished our first moonshot of the journey and on the way we wanted to develop the digital platform. 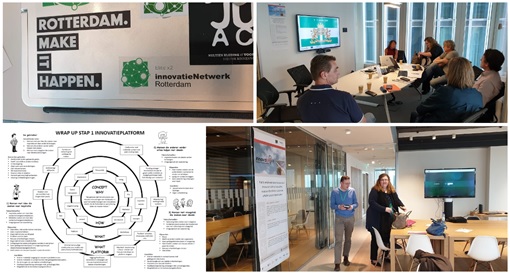 Things were now getting serious. Our plans, our goals, our LSG, our idea on finance, our project management, all needed to be there. Luckily this TN it was the two of us, Ivo Wissink and Jochem Cooiman. Murcia, a city I had only vaguely heard about before, as opposed to the well-known Paris. The first impression was a good one. Cozy streets, laid-back people, beautiful buildings and squares. We had the opportunity to see so much more of it, it it weren’t for the late flight. We missed the first night's tour. The first meetup with tapas and beers we did not miss.
Day one of the TN meeting started in city hall. A kind and warm hearted reception by the mayor of Murcia. We then talked about the MVP in progress and the local transfer plans. Also communication came to the table, a deep dive this time. Also we received explanation on lean management and service design.
What will forever remain in our memories about Murcia is the hospitality. Two memories, we had exquisite dinner in a museum/society and we finished the TN II meeting with a lunch that started, by I think, is still going on today. The photo with the arroz (don't confuse this with paella) was course 4 out of 5... Imagine our emotions when we laid eyes on that.

After Murcia the summer started. We had decided to build the new MVP on a platform of its own, rather than on the Mendix environment that MVP0 was built on. We started looking for a designer and a developer to do so. We received a quotation for both and planned to start shortly after summer holidays.
After returning to work we soon realised that the design of the platform was in good hands and good steps were taken. However, the developer didn't show up.
Good fortune was that the next TN would be in Rotterdam. That meant that our attention for Innovato-R would not be in vain. We wanted to deliver our partners a true Rotterdam experience, focusing on our innovation. Like many of the events that we have organised for our innovation community so far, the preparations were almost as fun as the TN itself.

The program was mostly on how Rotterdam deals with innovation. The journey for participants started. A LONG WALK for many: Kubus, station Blaak, Old Harbor, Wijnhaven, Oude Haven, Markthal, Grote Kerk, Meent, Timmerhuis, Stadhuis, Schouwburgplein, Central Station, Weena, Luchtbrug, Hofbogen and finally Mooie Boules, the best place in town for jeu de boules, bites and drinks (plus table tennis). All just an appetiser.
The reception was at city hall. Our international coordinator did the reception and showed us around city hall. After we left for De Rotterdam, to visit our digital experimentation center to talk about what innovation is in Rotterdam and how we innovate and support our community. After a traditional tomato soup with sandwiches and kroketten we left for the riverside. Watertaxi's brought us to BlueCity, the center for social entrepreneurs on circularity, a former tropical swimming paradise along the New Waterway. The session concerned how public organizations innovate and was guided by Maarten Nypels and Casper, a livemindmapper who registered all that was said in a continuously growing map. After the session we relaxed with some bites and drinks, until it was time for all to relax at their hotels and freshen up. Electrical tuktuks brought all of us there.
The Friday was all about Synergie and about the plans for the following months, where all partners needed stepping up the pace. So results and impact, planning MVP's, monitoring and dashboards.
Click here to discover our digital twin.
Click here to discover our digital experimentation center. 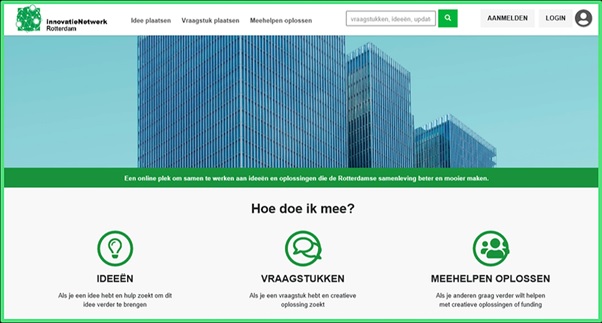 A journey to Transylvania, home of count Dracula and the place of forests upon forests upon forests. My initial idea. How wring could we be. Our first encounter with Cluj was that of a quiet, open, friendly city. Count Dracula, we learned later, was an America thing. The forests, yes, there were many.
During our recap meeting in the beautiful Civic Imagination and Innovation Center (CIIC) we caught up on what we all achieved so far, sharing results on pilot tests and talking about local adaptation.
We shared our positives = our local support group is involved + they know about the process of building an MVP + they just started testing MVP one + the delay gave us time to realize that the new MVP should be ‘mobile first’ + Rotterdam has been invited by the city of Turin to discuss public innovation)
And also the negatives = due to delay in the technical build the expenses made in 2019 haven't been to plan -/- we are still unsure how to upscale the digital innovation platform -/- we are still not sure on how to connect the digital innovation platform with other existing ecosystems online)
The memories about Cluj? Surprising and very innovative city, enthusiastic people with great mindset, varza a la cluj, lunch at chios at the lake, cemetery, Georgheni neighborhood, religions, many students, big glasses of beer (Ursus and Kasper), hospitable Ovidiu, dancing Fabio, guides Dalila and of course Oana.

A lot happened after Cluj, like a rapidly changing world. At the same time a little happened after Cluj, also due to this rapidly changing world. Nevertheless, standing still is NOT what we did.
We had finished MVP 1 in Cluj and had started the testing. During one of our inspiration lectures, this time on geopolitical change, about how politics and powers are shifting from the former West (US) to the East (China), with Europe in the middle. I took stage and invited all 200 network members to join and test.
We tested our MVP 1 and got quite a respond. Most of it concerned the inability to log in...... So.... Well.... A good lesson I guess. This was the first to pick up in deciding the requirement to be built in the new sprint towards MVP 2.
MVP 2 had the fourth developer in line. All the previous ones had done well and, had left the company we hire in Rotterdam. The new developer was very quick, god for us, and in three weeks and a bit was able to build a very strong MVP2. We celebrated this new release the middle of June.
June, the month that should have meant going to Porto to see all of our wonderful partners again at TN no. V. Obviously due to Corona/COVID 19 we were no able to meet. We did get to see each other digitally in April, during a conference call. We hoped to see each other in October, but, no such luck. We did manage to start building the last MVP of 2020. In October it got going.

We are almost finished with building MVP’s. Our developers built us the latest version of the platform, plus finally managed to make an app. Minutes before launching it to our community we learned that it could not be published in the app stores, neither of android, nor of iOS. Our technical colleagues noticed some issues that they didn’t want to accept.
What this means it that we need one more iteration. One more step before upscaling, before putting the platform in production, before the platform is as real as it gets. I am excited, but at the same time worried that others are not able to see the platform for what it is, a digital extension of our network. Flexible, connecting, adaptive, moving,…. and imperfect as the network itself.

Submitted by Valeria Tarallo on 30 April 2021