Veszprém won the title of European Capital of Culture in 2023, this challenge motivates the city administration to focus on the development of cultural services.

Refreshing moments at the Municipality of Veszprém – Interview with Ágnes Török

The City of Veszprém, as project partner of the European transfer network "Innovato-R", aims to adapt the practice of the "Innova.TO" initiative of Turin. In September 2019 Veszprém launched a call “Be an Innovator!” that addressed the employees of the municipality, municipality owned institutions and companies to select the most interesting and innovative projects for the administration. Veszprém won the title of European Capital of Culture in 2023, this challenge motivates the city administration to focus on the development of cultural services. The city management is convinced, that employees have unused capacity in the development of the cultural area, institutional system and community building.Renáta Kiss, the coordinator of the Innovato-R project, interviewed Ágnes Török, the winner of the process category, about her experiences with the idea competition.

How did the news of the idea competition reach you?

I have been watching the preparations for the Innovato-R project from the very beginning. I work as a project coordinator at the local municipality, one of my tasks is to prepare the ECoC (European Capital of Culture) projects. I have witnessed the process in which my colleagues developed their concept how the good practice of Turin could be adapted as effectively as possible to endowments of Veszprém and, of course, to the world of Hungarian civil servants. Thus, the news of the idea application reached me relatively quickly, of course, but at the beginning I did not have too much intention to apply, however I found the initiative interesting. I must say I didn’t fully understand what innovation means in the context of public administrators, what could be considered innovative. But later I recognised that I could contribute to making our office life better.

As a colleague, did you have any role in preparing the idea competition?

What I have seen is that my colleagues were working hard in the preparation phase of the competition together with the supporting group of internal and external experts and an ICT expert. There was a very easy-to-use online platform designed and, among the others, I have tested it as a user, and gave some feedback, so actually I haven’t contributed too much to the preparations. The marketing of the idea-contest was also very important, I saw it very effective, there were posters on the walls of institutions, everyone who was eligible to participate got a flyer with basic information on it, there were regular circulars via email, reminders and the “word to mouth” method has also worked.

What were the factors that made you hesitate, since you mentioned at the beginning that the idea of applying was not your first thought?

It is possible that we in Hungary interpret innovation differently than the Innovato-R project itself. Most of the people think that innovation is some kind of technological, economic, or scientific process. Innovation at the workplace, in the society, or in everyday thinking is much harder to understand. We think of something complicated or special when we hear the word. I guess I was not the only one who had these problems, I have learned from my colleagues that despite the comprehensive information and promotion not too many applications were received at the beginning. So my colleagues took the action, organised the “week of innovation” during which they visited several institutions and through the set of interactive workshops facilitated the deeper understanding of the “Be an Innovator” idea and the essence of the project. I myself understood this during such a workshop at the Municipality, understood that any initiative that improves an institution and, indirectly, a city in the long run, can be considered an innovation.

What do you think, what else can stand in the way of innovation? How receptive people are to innovation?

In the working environment in which the call for ideas was announced, people think as public servants, this is hierarchical system and it is challenging to encourage people to innovate. People simply do not believe that the ideas, requests of the employees are heard, they experience the submission of an idea as an unnecessary effort and useless imagination. Looking back Innovato-R has two very important benefits: it helps to reinterpret the concept of innovation, which is absolutely necessary to start development, to take the first steps. Another important result is that it has initiated a shift in attitudes towards the role of civil servants in the system: if people see the ideas come real, they will believe that they can be active reformers of the system. Even if this project did not motivate all colleagues, the next similar initiative will end with better results. We can also call Innovator the first link in the process.

What is the core, the essence of your idea?

In connection with my project idea, it is important to know that my first degree was a PE Teacher’s degree. I left the teachers career and studied and graduated from finance and accountancy later. I've been doing sedentary work for about 20 years. The negative effects of this „sitting” lifestyle had impact on me and some years ago I had spinal disc herniation. I couldn't walk, and I couldn't even lie because of the referred pain. Recognizing the harms of the sedentary lifestyle, I decided to learn physiotherapy as an adult. As a result, nowadays after the working hours in the office I do preventive spinal training and Nordic walking workouts for adults. I find that most of my colleagues suffer from the harms of sedentary work, even if they don’t have a discus hernia, they regularly have pain. We can see good practices in how other countries are trying to improve the well-being of workers, so I wondered why we couldn’t make ourselves a small gym.

With this idea, you won first place in the process category. But to what extent do leaders support the implementation of your proposal?

It really occurred to me that convincing an eight-member jury may not be enough to implement the gym, after which the support of the leaders is also needed. My arguments are actually very simple: inactive, sedentary lifestyle of people leads to degenerative and internal medical diseases like spinal diseases, diseases of the articulatory system, and also the digestive system and respiratory diseases, metabolic disorders, cardiovascular diseases hypertension -high blood pressure, diabetes obesity and also the low functioning of the immune system… just to mention some of the main problems and challenges which are very relevant nowadays. So our way of life leads to diseases that have negative consequences for the employer: workers drop out of work more and more often and for longer periods of time. This was soon realized, and since the space needed to design the gym was available and the equipment was not a big financial burden, they agreed to create the gym. 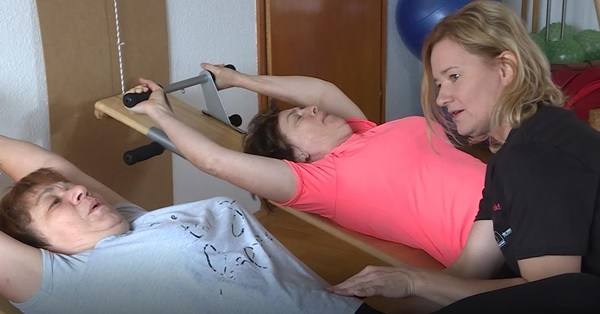 You told me that you have a degree in physical education and that you are also at home in spinal medicine. Are you active in designing of the gym, and how do you think people will know what exercises to do?

Of course, I take part in the design of the gym, as it is a pleasure to see that management supports the initiative. In addition to the usual accessories the room is also equipped with special instrument the use of which is not necessarily known to people. The risk is that the improper use may even be harmful. In my understanding the room is not for organized lessons but is open to everyone who feels the need to do some workout during the day and then go back to his or her duties. Before being authorized to use the gym, everyone should attend a basic course to learn simple movements and practices and colleagues will get the safety information, too. We also want to introduce an electronic booking system to avoid crowding. This might be my “new job” here in the office.
Thank you for the interview. 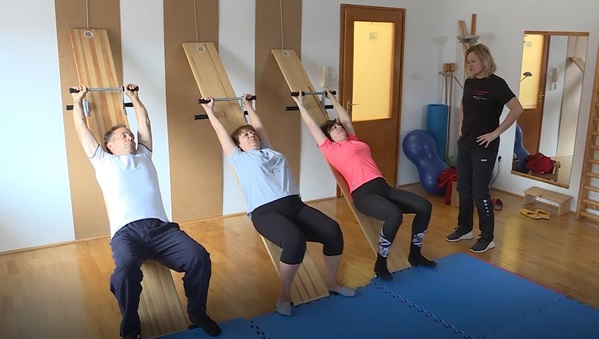