The refugee reception crisis of 2015-2016 brought to fore the need for common European patterns of reception and inclusion. For long decades Europe has integrated immigrants and refugees, more or less successfully through to different procedures. In most of the cases integration is carried out without any steady plan and organisational structures.

As such, Municipalities over Europe facing directly the challenge of integration have responded to the reception needs with different approaches and according to variegated policy patterns. URBACT has selected some city-based examples of migrants and refugees integration, recently awarded as Good Practice. Some of these practices have been presented and discussed at the URBACT City Festival in Tallinn, October 2017, namely the cases of the city of Amadora, Ghent and Hamburg. This paper is the outcome of the session “migrants and refugees” at the City festival, introduced by an overview of the refugee reception crisis in Europe by K. Tsitslikis, Prof. in Human Rights Law at the University of Macedonia, Thessaloniki, GR.

The recent reception crisis follows a dominant narrative according to which frontiers have to be protected against derogatory called “invaders”. As EU is bound by international refugee law, those who have a legitimate ground to acquire refugee status have the right to stay. However, step by step certain bypasses have been created in order to decrease the number of arrivals and reduce the number of persons who would potentially stay. A fundamental reversal in the refugee basic framework has been made, namely the revisiting of the protection from returning to a “non-safe country.” The universal value of the refugee international law started to fade out and lose its effectiveness as long as refugees started to move away from European territory. In this sense, any notion of safety of the refugees to the first line of contact with the EU is highlighted as a political and regulatory objective for Europe itself, together with another emerging objec-tive, that of the creation of the conditions of housing and social integration. Anyone who manages to remain within the state territory is confronted with the issue of legality (the “undocumented”), the conditions of living and the integration prospects (which applies both for legal and “undocumented” refugees). Individuals without proper pa-pers are those who applied for asylum status but whose application was declined and those who never applied.

Predictability and security of law, for both receiving societies and refugees are un-dermined by European policies and law that in recent years attend to make “life difficult” to new comers. Uncertainty of legal pathways to move from the periphery of Europe (Italy and Greece) towards the center of Europe fosters illegality and despair. The family reunification, resettlement and relocation schemes are slow, with differing rates among states of acceptance, with no common standards of selection. After all they are insufficient to cover the real needs of those who have right to move from precarity to a stable environment. Most of all the EU-Turkey common statement of March 2016 [European Commission, EU-Turkey Agreement: Questions and Answers] tests the rule of law and human rights European construct. Asylum seekers entrapped in the Eastern Aegean islands (a buffer zone within EU soil) should be returned to a non-safe country, Turkey. Within continuous temporariness and uncertainty, European Union cities, which are at the forefront of reception, are called to integrate refugees and immigrants. Is that a mission impossible?

European Cities mobilise for a better welcome to new comers

The cities selected as URBACT Good practices present variants of the integration process at city level targeting the aim of finding proper location for accommodating refugees in the city (Hamburg DE), fighting prejudice and rumour towards immi-grants (Amadora, PT), fostering solidarity in the provision of public services (Ghent BE).

Finding the right location for Refugee Accommodation collectively in Hamburg

During the highest peak of refugee influx in the city of Hamburg between 2015-2016, citizens protested against the establishment of large and inhumane welcome centres, in favour of adequate housing for the new comers.

The municipality questioned whether and how the allocation of refugee accommodation can be dealt as collective and city-wide challenge, in which citizens themselves can take responsibility and contribute to a common solution. 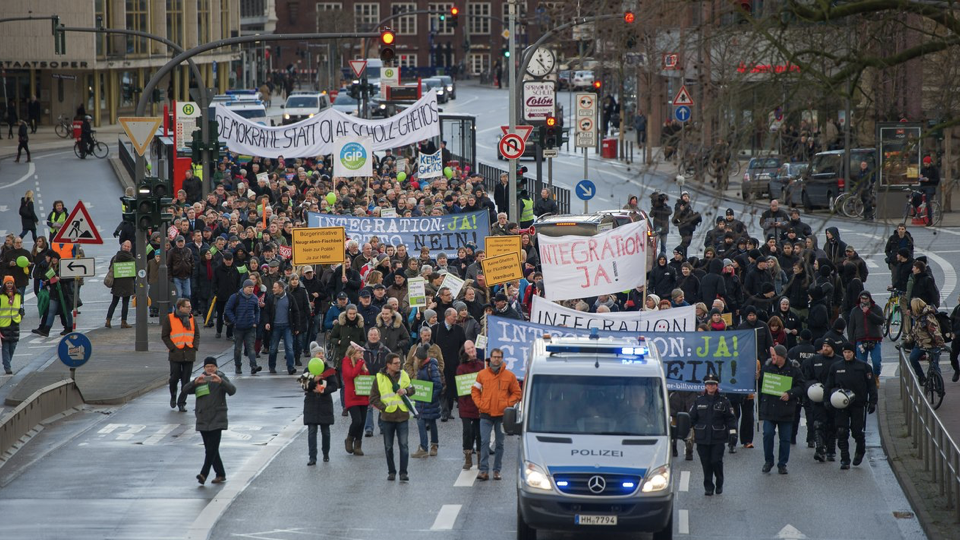 In response to that the municipality of Hamburg launched a collaboration with the HafenCity University CityScience Lab resulting into the project “Finding Places”. This is lab in which multiple stakeholders interact around a virtual table with the city map to discuss about public spaces and the potential allocation of accommodation. “Every participant had LEGO blocks in their hands and they could place them on a certain parcel of land, in a precise spot on the map where potentially suitable for new shelter, and automatically would have information on the screen about that space such as who owns it, size, and legal information.” (Prof Ziemer, presentation Tallin 2017)

People talked about empty, unused, or under-utilised spaces known in their daily experience of the city. This approach was crucial for collecting unspoken information and improving the transparency of the decision making process. According to Prof. Ziemer, Project leader, it encouraged participants to think about location in a creative way, e.g. talking about public spaces in terms of opportunities rather than restrictions. In the Finding places workshops circa 400 people took part, and of the 161 proposed areas, 44 have been proofed suitable for new accommodation. Prof. Ziemer acknowledges that despite the pre-processing of data, the topic remained difficult for non-expert participants, and this was one of the reason why this project was mostly directed to German-speaking residents. However, this process also made administrative procedures and decisions transparent, contributing to the ‘political literacy’ of the general citizenship, while lowering suspicion and fostering acceptance in the city towards refugees. 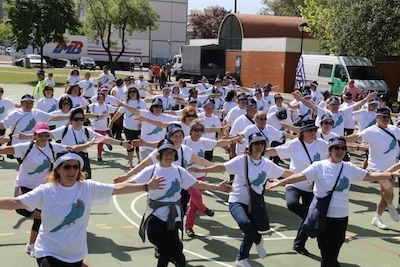 Different is the approach of the city of Amadora in which integration is tackled through soft measures to demystify unspoken prejudices and stereotypes towards new comers. Inspired by the anti rumours campaign from Barcelona, the Municipality of Amadora politically committed to launch a “do not feed the rumour” campaign.

In Amadora the immigrant community counts to circa 10% of the 175 000 inhabitants, with 41 different nationalities. Surveys conducted by researchers (Centro de Investigação e Intervenção Social/Instituto Universitário de Lisboa) mapped the types of prejudice towards immigrants which affected negatively the capacity of integrating in schools, in finding a proper jobs and in accessing adequate housing.

Through a snowball effect local organizations, municipality, schools, and cultural associations came together to establish an anti-rumour network: the network scope is to sensibilise citizens about the detrimental effects of rumours, via promoting workshops, collective public events, theatre and other creative initiatives. Anti rumour agents have been ad hoc trained to promote this project capillary in every environment of daily life of Amadora citizens. The campaigns involved about 75 organizations and reach about 2500 persons, and it is now a well established approach that the city is committed support.

An easier access to service provision for refugees in Ghent

The experience of Ghent offers again another view on integration via the establishment of an architecture of service provision combining workers in public administrations and volunteers.

During the major influx of refugees in the 2014-2015 in Belgium, Ghent organised a Refugee Taskforce with the goal provide asylum seekers and refugees easier access to social rights. In practice this task force is in place to coordinate cooperation between city services, public service for social welfare, local NGO’s and volunteers. The areas of actions are divided into three working groups for 1. shelter, 2. integration, 3. volunteers and public awareness. 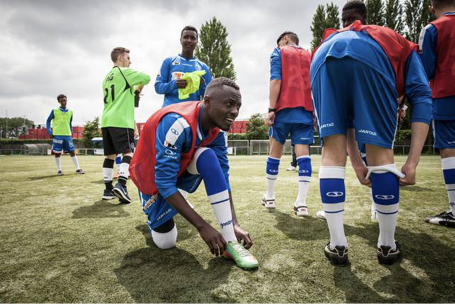 The approach is to start integration from day one coordinating all actions necessary to guarantee the basics needs in terms of housing, health, education and access to cultural and leisure activities: from the day asylum seekers arrive in the city of Ghent they are set in contact with relevant organisations, while allowing organisation and citizens volunteers to get to know the new comers. “Since 60% of them are getting recognised as refugee, there is no need to wait till the decision in their asylum application is taken” Kathleen Van De Kerckhove, Coordinator Refugee Taskforce. Moreover, refugees are not treated as passive recipient of support since themselves engage in the activities of the taskforce as volunteers or experts in certain domains according to their skills. As matter of fact the success of this project is in having created a collaborative and efficient structure. All the services are shaped and provided with a collaborative and solidarity-based philosophy where volunteerism and citizens initiatives are fundamental to achieve integration.

“Today this proactive approach towards integration is not considered exceptional any more. As result of this, in our city we now have more volunteers working in local groups. In Belgium there are other cities engaged in similar projects, but still the public discourse is that people do not want more refugees, they have enough, and this is a tricky aspect to tackle”. Neelke Vernaillen, Ghent Municipality

These three short examples show the variegated responses at local level in the process of integration, which demonstrate its limits especially in the fragmented political situation in Europe. As the comment from Ghent Municipal officer shows, even in the positive stories, the challenges of integration supersede the localities. 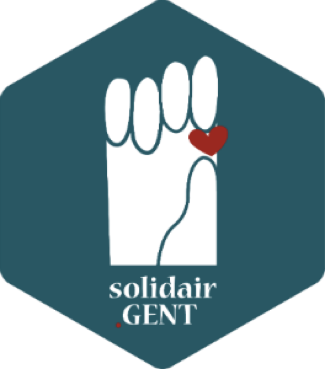 Cities Good Practices should not be looked as single and isolated cases. Their experiences ask for being harnessed for learning in successes and pitfalls beyond the local scale. Networking among cities, and lobbying for integration beyond national borders are essential to fulfil democratic principles in Europe and to abide the principles of international law for human rights. Many initiatives at EU level as the EU Urban Agenda Inclusion of Migrants and Refugees support cities in linking, learning and improving EU regulations in relation to migrants and refugees integration. As URBACT, we support, and encourage cities to apply to Transfer Network to contribute to this challenge.