Home » Governance » In Italy, a struggling town looks to refugees for revival

In Italy, a struggling town looks to refugees for revival

"In Italy, the job of settling and integrating asylum seekers belongs to local governments. Mayors across the impoverished southern region of Calabria, and especially here in Satriano, are embracing this responsibility in a big way.Local officials in Satriano are enthusiastically situating refugees in temporary housing, lining them up with jobs and assisting them with their applications for asylum."

SATRIANO, Italy — The population of this town located in the toe of Italy’s “boot” is shrinking as its residents get older.

The narrow streets climbing the hills of the old town are lined with empty houses marked vendesi — for sale. The central square is nearly empty at midday — just a couple of shops remain open. The biggest commotion in town happens each day at 8 am, noon and 4 pm. That’s when a loud siren blares to commemorate bombings during World War II, which many of the residents are old enough to remember.

At its peak in the 1950s, the old town of Satriano had about 3,800 residents. Today it’s down to about 1,000. If it shrinks much more, schools, health clinics and the local post office may have to be closed.

So when a flood of refugees began pouring into Europe last year — some of them on boats landing on Mediterranean beaches not far from here — local leaders saw it as a great opportunity. In Italy, the job of settling and integrating asylum seekers belongs to local governments. Mayors across the impoverished southern region of Calabria, and especially here in Satriano, are embracing this responsibility in a big way.

Local officials in Satriano are enthusiastically situating refugees in temporary housing, lining them up with jobs and assisting them with their applications for asylum. The hope is that the refugees, most of them men in their 20s, will choose to stay here rather than making their way north to more prosperous parts of Italy or on to Germany, Sweden or the UK. Perhaps they’ll bring their families, buy some of those empty houses and make a life here.

“The presence of refugees can be an opportunity to repopulate the town,” says Satriano Mayor Michele Drosi. “It can create a virtuous cycle.” 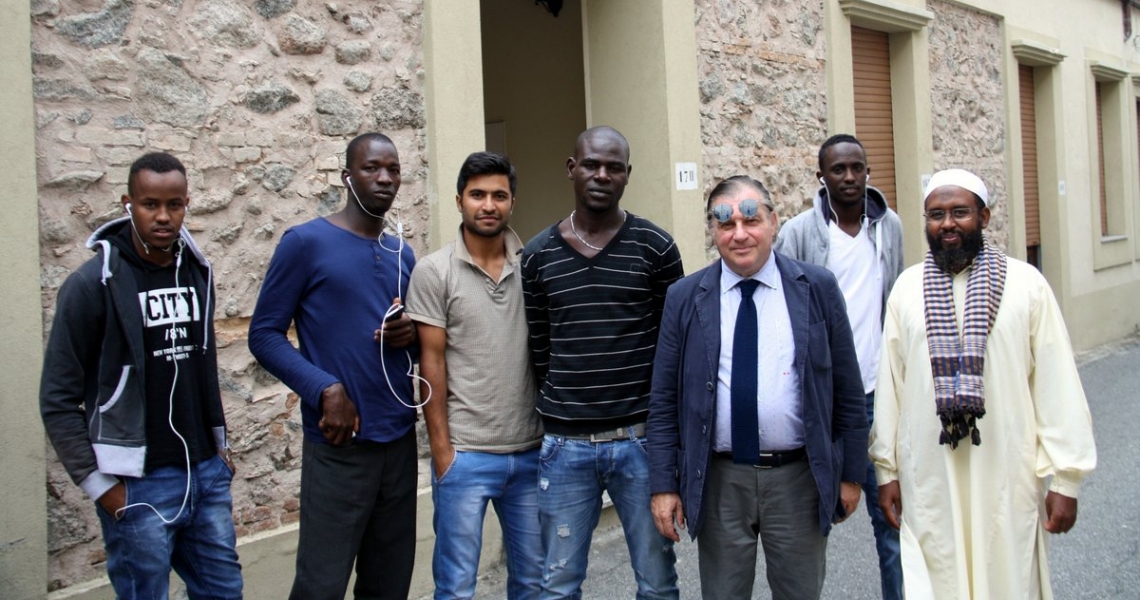 The results of Satriano’s welcoming attitude remain modest — about 20 refugees are currently living here, hardly enough to reverse decades of decline. But Satriano’s inclusive policies are a model for the kind of approach cities and towns across Europe are going to have to consider as they absorb the 8,000 refugees and migrants arriving on the continent each day. And it may just work, at least for some of the people passing through.

“If I find a good job I will be happy to stay here,” says Adnan from Pakistan, who is working as an apprentice for a local hairdresser. Adnan came to Satriano after spending three months in Pescara, a larger city in central Italy. “I prefer the dimension of life of a smaller town. And also the cohabitation with people from different ethnic backgrounds, such as the guys from African countries hosted here, is working well.”

Embracing outsiders comes easy for the residents of Satriano because many migrated themselves in their younger days. In the 1950s and ‘60s, hundreds of locals left for Switzerland, Germany and Argentina to find work. Those who returned can sympathize with the young men coming here now, mainly from Pakistan, Mali and Burkina Faso.

As Carmine Battaglia, president of the local association of seniors, puts it: “Who better than us, who left town because of poverty as young workers, to understand the pain of those people fleeing wars and persecutions?”

Satriano is part of a national network of 376 municipalities called SPRAR — the Protection System for Refugees and Asylum Seekers. The network was created by the Italian Ministry of Home Affairs, is funded by the national government and European Union and is managed by a central office led by the Italian Association of Cities. (Disclosure: I currently work for the association of cities, but not directly for SPRAR.) 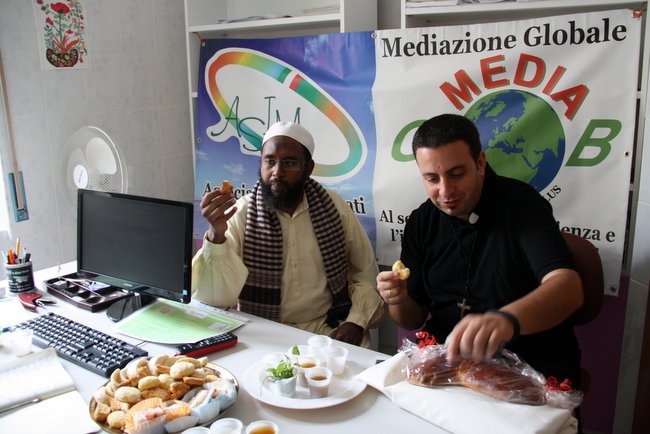 The model in Satriano is a good example of what SPRAR calls an accoglienza integrata, or “integrated welcome.” Like other cities and towns in Italy, Satriano receives €35 per day per refugee it hosts — the money comes from the Home Affairs Ministry. A local cooperative known as Mediazione Globale manages the project on behalf of the municipality. The cooperative is staffed almost exclusively by former migrants who have attained Italian citizenship, including its local leader, Khalid Elsheikhe, who came to Italy from Sudan in the early 1990s. Mediazione Globale helps refugees buy food, find housing and learn how to speak and write Italian. They also help refugees write applications for asylum, collect the necessary papers and coach them on what to say during their official interview.

While the asylum process plays out — it can take six months to a year — Mediazione Globale helps the refugees line up jobs. Some find work with the municipality doing street cleaning, gardening or maintenance in municipally owned buildings. Others have received work grants that allow them to work in a private enterprise but get paid by the municipality — the employer must agree to offer job training. This is the basis by which Adnan from Pakistan is working at the hairdresser; another refugee is working in a factory that makes doors and windows while two others have jobs in agriculture.

For most of the newcomers, finding work is the most important determinant of whether they’ll stay in Satriano or move on to parts of Europe where jobs are more plentiful. One refugee named Abdullah, from Mali, told me he was happy to clean streets for the municipality — “it gave me the opportunity to live in close contact with residents and feel better integrated here.”

But Abdullah admits he may move elsewhere if his asylum papers come through as he hopes. “It will be fundamental to find a good job if I want to settle here in Italy,” he says. “Once I get the status of refugee, I will go where I can find a job.”

Mediazione Globale’s Elsheikhe says even those who leave Satriano may return some day. “We are still in contact with some of the refugees who passed by here and settled in UK cities such as Manchester,” Elsheikhe says. “Some of them say that their desire is to gain enough money to open a shop or a restaurant in Satriano and come back to live here.”

For now, most of the refugees in Satriano live in a renovated historic building called the Palazzo Condò. The municipality used European Union funds to fix up the old building, which is located next to Satriano’s biggest church. There’s 20 beds to host refugees here. The basement is now being restored to host a daytime center for elderly residents. It was a deliberate choice to have the refugees and seniors share the same building, intended to spark conversations and common understanding. 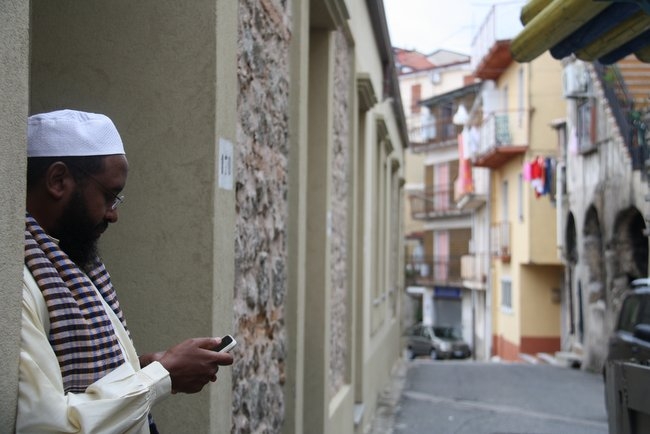 Some of that has been happening organically already. The local association of seniors invited refugees along on social outings for its members, including a mountain excursion. Some younger people in town brought refugees to a football match in a neighboring town. Residents are hosting asylum seekers for dinner in their homes, or offering free car rides between the old town to a newer section of Satriano near the Mediterranean Sea. (The carpooling is part of longstanding system locals use among themselves to help students or others without cars to get around — public transport is lacking in this part of Italy.)

Satriano hopes to grow its program by renovating some of the empty houses in town into new shelters to host even more asylum seekers. The houses would be used either on a temporary basis for people passing through, or perhaps be rented out directly to those who choose to stay.

There’s fair reason to doubt whether Satriano’s plans will work — there simply may not be enough jobs here to convince large numbers of immigrants to stick around. But with Satriano’s hospitality, the immigrants are sure to at least give it careful consideration.

“We aim to get this process of integration even better,” says Mayor Drosi. “We want to make the asylum seekers really feel like citizens of Satriano and part of the local community.”

The integration of refugees and asylum seekers has been perceived as a problem by many European States but many cities saw it as an opportunity to promote growth and innovation at social and economic level. That is shown also by the attention given to the topic by different European programmes, such as Urban Innovative Actions which inserted the investment in the integration of migrants and refugees among its top priorities. URBACT too is going to face this topic with one of the 21 new Networks approved, Arrival Cities: led by Amadora, the network will focus on how the effect of a rapid change in the population structure in cities and how different social groups interact with a growing migrant population.

This article was first featured in Citiscope. Citiscope is a nonprofit news outlet that covers innovations in cities around the world. More at Citiscope.org

Submitted by sdantonio on 23 November 2015