Local drive for a cycle-friendly city

Facing severe pollution from over-reliance on cars, Thessaloniki (GR) committed to promoting cycling proactively, and, through the URBACT RESILIENT EUROPE network, drew up its first-ever strategy framework to increase cycling in the city.

As Greece’s second largest city, Thessaloniki has experienced a concentration of the challenges facing the country: a financial crisis reducing service resources; severe air pollution from a dependence on cars; poorly maintained mobility infrastructure; and a climate of mistrust between civil society and local government.

The Municipality of Thessaloniki recognised that its previous responses to urban problems had not included citizen input. By participating in RESILIENT EUROPE, Thessaloniki wanted to learn from partner cities how to implement a more open approach of developing local strategies and plans in collaboration with citizens, and in turn build better trust in local government.

The city decided to focus its work on developing a collaborative action plan for promoting and improving cycling in the city, which had been suffering from low citizen engagement as well as inefficient, poorly maintained infrastructure. In its Sustainable Energy Action Plan, Thessaloniki had already determined to decrease CO2 emissions by 20% from 2011 to 2020, but it needed more support to engage citizens in the process and promote cycling as a viable travel mode.

An action plan: mobilising the community to travel safely

Thessaloniki hoped the URBACT network would improve collaboration between urban actors. Creating an URBACT Local Group helped by bringing a variety of stakeholders together to work on promoting cycling, while improving local air quality and residents’ health. The URBACT Local Group consisted of a mix of people from the city’s department of sustainable mobility, alongside local agencies like the Metropolitan Development Agency and NGOs, including cycling clubs.

To test out new approaches and work towards the creation of an Integrated Action Plan, the group undertook an experiment in the area of Toumba in eastern Thessaloniki, focused on co-creating new solutions with citizens to increase bicycle use. 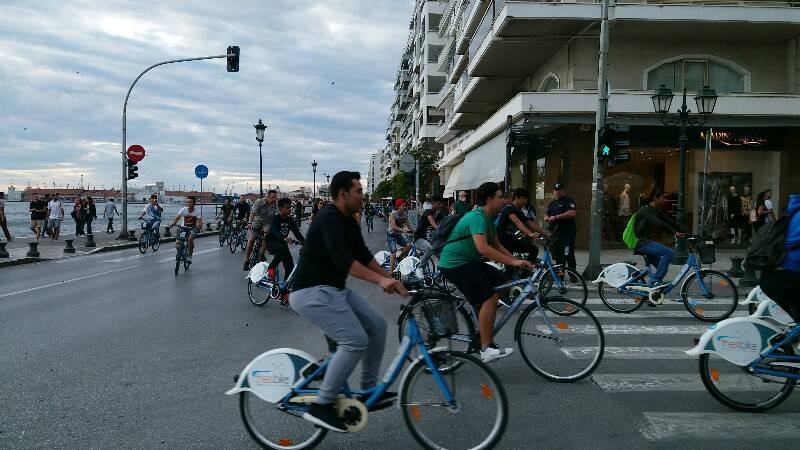 The group organised a public event in May 2017 called ‘I move in my city with safety’, inviting local residents to hear about how cities around the world had encouraged cycling, as well as understand more about the URBACT network. A questionnaire collected citizen feedback on the challenges of cycling locally, and suggestions for improvement. The feedback showed that local residents desired more bicycle nfrastructure — including bike lanes and cycle parking facilities — as well as better road safety, traffic calming measures, free cycling and traffic safety courses, and an expansion of the existing bike-share system. The URBACT Local Group included these suggestions into the Integrated Action Plan for the city.

In June 2017, the local group organised two family-friendly, community cycle events to help promote cycling. The cycle routes passed through quiet streets and connected various schools, to help citizens realise that, even without bicycle infrastructure, there existed safer streets that could enable daily bike commuting. Participants in the cycle event agreed the route was safe for cycling and felt that the event’s in-situ experiential bike training and road safety lessons were very useful.

Following the community events, the local group formulated an ‘Integrated Action Plan to promote cycling and improve the resilience of society and the city of Thessaloniki’. It proposed measures such as: introducing a compulsory education course in cycling; implementing awareness and motivation campaigns to promote cycling; creating cycle parking lots near businesses; and encouraging a cycle-to-work campaign.

After the project, the municipality applied lessons learnt from the RESILIENT EUROPE network and submitted a proposal for regional funding. It was successful — and Thessaloniki received funding to expand the current bike lane network and renovate a portion of the existing one. “We believe that the participation of the municipality in the RESILIENT EUROPE network had a significant role in the success of our proposal,” says Georgios Papastergios, Operational Planning Officer at the Municipality of Thessaloniki.

Andreas Karadakis, Finance and Project Manager for the municipality, elaborates on how the URBACT programme benefitted Thessaloniki: “I think the most important thing we gained from our participation in the RESILIENT EUROPE network was the methodology of participatory action planning. It's really important to transfer this know-how to other municipal services. The interesting element of the network was the pillar of resilience that brought together cities facing different challenges. Municipal services that worked in different fields came into contact, and this interdisciplinarity was a source of inspiration for the service of our municipality.”

Thessaloniki had never before implemented a concrete framework of strategies for the promotion of cycling, and the very procedure of creating an Integrated Action Plan was a new methodology for the city. Building on this successful first experience, the municipality hopes to apply the same methodology in future projects around the city.

The road to COP26: climate change at the heart of URBACT cities of all sizes