The Intermunicipal Community of the West Region (OesteCIM) of Portugal is one of the 9 partners in URGE. Paulo Jorge Lopes Simões is the 1st Secretary of OesteCIM and is responsible for the circular economy strategy for the West region. Mr Simões plays a role in the project activities of URGE and has a background in public management and human resources.

What has already been done in the West region in terms of circular economy in civil construction?

In the last two years, OesteCIM has worked on the implementation of circular economy in the region. Several projects have been developed, namely in the area of environmental education, through the distribution of environmental kits to students, a competition for entrepreneurship in schools under the theme of circular economy; distribution of ecopoints in several institutions, public procurement for the acquisition of green vehicles, backups and mobile communications and refunding consumers for the return of bottles made of non-reusable plastic. OesteCIM also joined the Green Deal of Center Region (NUT II), similar to the Dutch case, which intends to develop good practices of public procurement in the circular economy.

Circular economy in the civil construction sector is already a strategy in our region: the collection of waste has been encouraged so that it can be recovered and incorporated back into the streams of materials, to reduce the quantities extracted from the environment and thus reduce the ecological footprint. On the other hand, we encourage the correct disposal of waste and we discourage the abandonment of materials in the public and private forest spaces, which unfortunately happens very often.

At the level of public procurement OesteCIM has already developed framework agreements for the acquisition of green vehicles, backups and mobile communications. The municipalities and OesteCIM are currently doing their procurement processes under these framework agreements. Since most of the initiatives are as of yet private, OesteCIM aims to encourage more public initiatives.

What are the challenges identified?

In recent years, the West region has witnessed a very large growth. Due to the many tourism awards that the region has received, many people are involved in the tourist accommodation sector. The West region has seven municipalities with coastline and good conditions to practice sea sports all year. Over the past few years, there were more than 3850 housing development projects. In this sense, there were massive levels of construction and reconstruction without the concern of incorporating circularity criteria. OesteCIM has incorporated criteria for circularity in many of the procedures of agreement frameworks for acquisition of public purchases but until today there has not been a similar initiative for the construction sector.

Considering the growth of the tourism accommodation sector, the region and its 12 associated municipalities intend to set an example by including criteria of circularity in the purchases related to the construction sector so that, in a first phase, they are used in the construction and reconstruction of  municipal buildings and, in a second phase, develop awareness and related actions at the main actors in the private sector. The main goal is to reduce CO2 emissions and make the territory of the West more environmentally sustainable.

What recommendations do you suggest and to whom, to improve their implementation?

This project of OesteCIM represents an important contribution to raise public awareness of the problem of illegal discharges of construction and demolition waste, which may include hazardous waste, resulting in environmental liabilities and degraded landscapes. Seeing that construction is increasing in our territory, OesteCIM seeks to learn from the best practices to implement circularity measures in the construction sector with local partners in order to make the West region more sustainable.

The main local partners are the municipalities, for raising the awareness of the population and technicians on the importance of sorting waste and the importance of introducing circularity criteria that should be used in public tenders for the construction sector. Also, municipalities are important for training in public procurement procedures and circular criteria assessments and for imposing of circular economy measures at the private sector.

Who are the main interlocutors that should be the engine of the process?

Companies and business associations are key through the promotion of seminars with the objective of encouraging the use of best practices in the management of construction and demolition waste and their incorporation into the value chain of companies. Public administrations, in particular local government technicians, play an important role in the regulation and monitoring of the waste sector. A number of initiatives are therefore essential to raise awareness and inform them of the current situation:

Are there already any examples or pilot projects within the circular economy in the region?

As mentioned earlier, OesteCIM has already developed a range of  projects based on circular economy principles. 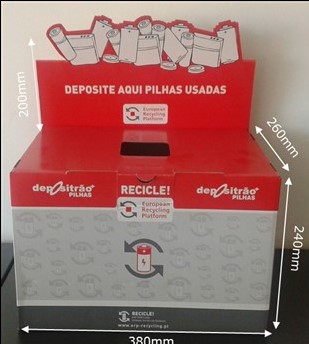 In partnership with Novo Verde and ERP Portugal, marking the European Week for the Prevention of Waste, a collection campaign for used batteries was launched. The initiative ran at schools and companies of the 12 municipalities of the West region (Alcobaça, Alenquer, Arruda dos Vinhos, Bombarral, Cadaval, Caldas da Rainha, Lourinhã, Nazaré, Óbidos, Peniche, Sobral de Monte Agraço and Torres Vedras). For every 500 kg of used batteries collected, €250 is donated to social institutions involved with essential goods and social works.

OesteCIM, has delivered environmental education kits to all students of the 4th year in the twelve municipalities of the West region. The kits were composed of a backpack, pencil and canteen made of recycled materials and a booklet about the West region’s territory and the importance of preserving it. The aim of the initiative is to promote the adoption of recycling behavior and the consequent attainment of the national targets set for 2020, not to mention the commitment of carbon neutrality and the progressive elimination of the use of plastic. The project delivers up to 4000 kits by May this year and is part of the set of initiatives for education for circular economy, carried out by OesteCIM and Novo Verde.

Distribution of collectors for batteries and small electrical and electronic products

In partnership with ERP Portugal and Novo Verde, OesteCIM has distributed collectors for batteries and small electrical and electronic products in all municipalities of the West region.

The Oeste + RECICLA project in which the Norwegian company Empower is a partner, is based on the idea of using new technologies to promote circular economy. Voicing Empower's vision to enable people to create a better and cleaner world, the project’s goal is to establish a deposit refund system for non-reusable plastic bottles based on the same philosophy of the Norwegian bottle deposit system. By giving value to plastic waste, flow of plastic into the environment can be prevented and the collection of waste in an economical beneficial way can be encouraged. By taking digital inventories, it also ensures that most of the collected plastic will be reused and recycled. 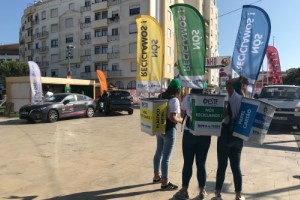 During 2019, OesteCIM developed an awareness campaign at major events of the twelve municipalities of the West Region. The use of human eco-points conveyed the message of waste packaging and illustrated the importance of its recycling and the responsibility of citizens in the selective disposal of waste. 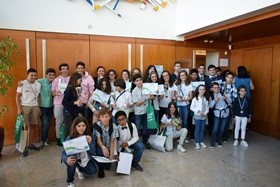 Already running since 2014, the schools entrepreneurship competition targeted all students of 1st to 3rd cycles and secondary education of all educational institutions in the West region. Students who were interested in presenting a business project or idea could join the competition. Responding to the concerns of future sustainability of resources and population, the Schools Entrepreneurship Competition initiative of 2018-2019 was focused on circular economy areas in order to promote ideas with a focus on reducing, reusing, recovering and recycling materials and energy. The finalists of the West region represented the region in the contest of the NUT II Center.