'Migrant crisis': which engagement for Europe and the Urban Agenda?

Following the article on affordable housing in Europe, we're continuing our series on the Urban Agenda for Europe partnerhsips. This month - inclusion refugees and migrants. To be read together with ‘Migrant Crisis’: what can cities learn about new service design? by Eddy Adams.

The Urban Agenda for Europe is engaged in addressing what is considered the biggest wave of migration to Europe after WWII and its impact on cities. Which way do we frame these actions in a labyrinth of political and humanitarian tensions?

Imagine an average European midsize city, with an entire population of about 80,000 inhabitants, the majority women and children. The same amount of people arrived by boat in Europe during the first six weeks of 2016. (UN refugee Agency, UNHCR).

Add a mid-size city with poor services and infrastructures of 46,000 inhabitants (the sole camp of Idomeni has hosted circa 11 000 migrants) created in the new Greek archipelago of refugee camps (UNHCR 2016). Migrants have been trapped in Greece since Macedonia shut down the Balkan trail used to cross the border with Greece. 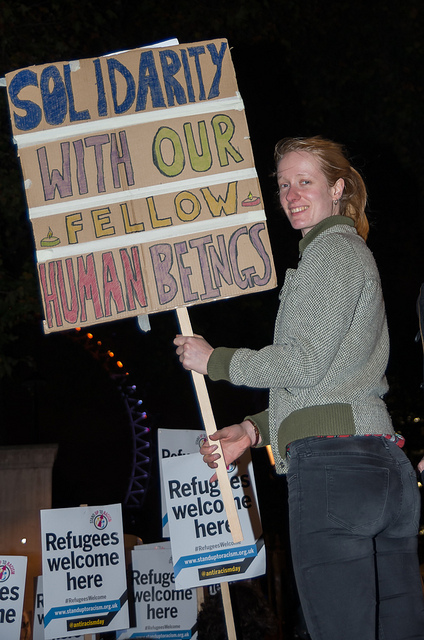 Moreover, migrants fleeing from Africa through Libia and Middle east, more or less the size of the population of the Brussels region, reached Europe in 2015. Today, it is evident that the number of desperate people with no alternative but to place their children in the most dangerous journeys of their lives, is dramatically growing.

These events disrupt the European Union fundamental roots of solidarity. Member States are (dis)agreeing on a quota-based system relocation scheme and Europe is failing with the un-just EU deal with Turkey which essentially sends fleeing people classified “without a right to international protection” to a country with an authoritarian regime. A deal strenuously objected by NGOs, independent volunteers initiatives and international humanitarian organisations, denouncing disrespect of basic human rights (ECRE, UNHCR, Amnesty International and many others). Furthermore EU asylum rules[1] allow Members State “to reject asylum seekers’ applications without examining the substance” (for example in Scottish cities, German ones or in Vienna). These conditions create a messy situation in which already distressed people are struggling to find their way towards a decent life amidst a labyrinth of contradictory and often unfair rules[2].

Many European cities administrations are engaged to implement locally viable solutions to provide protection, proper shelters and support responding to migrants’ needs. The strategies differ widely as they are locally based initiatives. A recent Eurocities report based on a survey of 34 of cities in 17 EU states plus Norway provides an overview of the experiences of European cities as hubs welcoming newcomers. Cities’ administrations are also networking, lobbying and increasingly  organised to exchange practices Europe-wide, regardless of limits imposed by central governments.

Last year Mayor Ada Colau launched Barcelona Ciutat Refugi and recently, Barcelona’s ‘urban resilience week’ brought together the mayors of Barcelona, Athens, and Tiassalé (Côte d’Ivoire) together with the general secretary of United Cities and Local Governments (UCLG) to exchange local response to welcome migrants in their cities. City-to-city deals have been made such as the one proposed by the mayors of Barcelona and Athens to relocate 100 refugees in Barcelona.The 21 April Declaration by the Mayors of the EU Capital Cities on the EU urban agenda and Refugee Crisis expressed their pledge for a coordinated actions among cities; the CEMR (Conference of European Municipality and Regions) launched related initiatives seeing cities as protagonists. 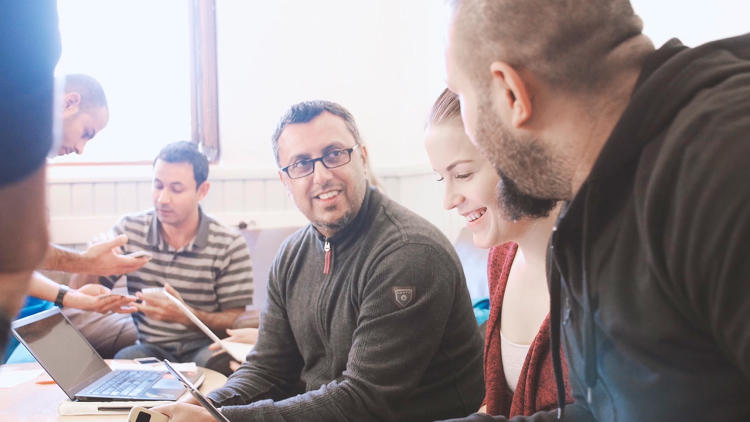 URBACT is fostering the work of Arrival Cities network developing peer-to-peer local integration action plans for migrants integration: the cities of Amadora, Patras, Messina, Riga, Oldenburg et al. involve local NGOs, independent neighbourhood initiatives, local institutions and research centers to collaborate in the areas of education, cultural integration, employment and public services. Other URBACT networks have worked in the past on the same topic as MILE network and current new ones may be dealing with this topic in the new call for Implementation networks.

Strategies implemented at city level, encounter several tensions. Local policies happen sometime in contrast with decisions taken at higher levels, since integration policies are in the hands of national governments. The EU funds do not always reach the right target and discriminate on people with different legal status making difficult to help especially undocumented migrants[3], which reach European cities. All in all, although the importance of the urban dimension has been widely recognised, cities lack a seat at the table when it come to policy.

Multilevel governance in the Urban Agenda for Europe

The Partnership of “inclusion of migrants and refugees” is in principle a unique opportunity for coordinating urban actions between levels of government and civil society and sharing different knowledge at the same table. In the remit of the Urban Agenda for Europe is “to establish a more integrated approach to EU and national policies and legislation with a clear impact on Urban Areas". The partnerships within the Urban Agenda for Europe would be implemented through an Action Plan with concrete actions at EU, national and local level providing guidance for 1. Improving European Regulations; 2. Improving access to European funding; 3. Improving knowledge-sharing and inter-city co-operation.

The partnership held two meetings, exchanging knowledge among the volunteer partners (e.g. local strategies for welcoming migrants in Berlin, Barcelona and Athens in various sectors as e.g. housing and public services). Among the partners are EU DG Home, DG Empl, three Member States (Italy, Portugal, Greece), the cities of  (Athens, Helsinki, Barcelona, Berlin and Amsterdam) plus international organizations (some as active members as URBACT, CEMR, ECRE and EUROCITIES) and other to be involved in relation to thematic relevance (e.g. UN, PICUM, EUKN and others). In terms of regulations, the partnership is drafting an extensive mapping of the regulations concerned, an exercise requiring better coordination among the different DGs. In terms of knowledge, there will be actions related to coordination of existing platforms, and mapping of practices and case studies of city-led migrants integration projects. In terms of funding, there will be actions to coordinate the existing funds: the EU Funds available for urban sustainable strategies (circa 15 billion €), and social inclusion (circa 21 billion €) should be better used to facilitate the cooperation of local authorities with managing authorities, national and/or regional. The first results of the Urban Innovative Actions show  (50 proposals under the migrants and refugees strand, with an overall budgetary envelope for 2016 of 80 million€) an additional investment in the topic. Future steps of this partnerships is the organisation of ad hoc seminar in specific thematic areas as housing (involving the Affordable Housing partnership), jobs, education and community organising. 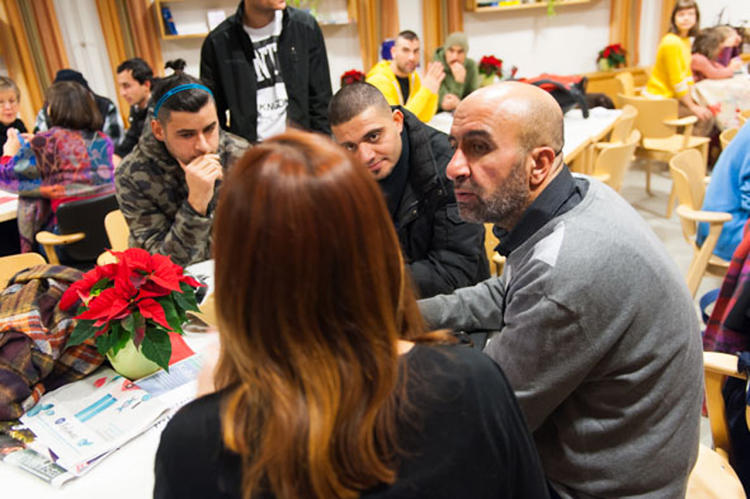 Cities actors in the Migration Crisis?

The EU urban agenda should operate as a permanent political dialogue between the EC, Member States, cities and civil society on this topic of integration of migrants in cities.  It should further develop city to city partnerships based on the recent start of direct cooperation tackling pressing issues as resettlements, providing clear information on the discrepancies about what is happening on the ground and the decisions taken in EU offices.

As said elsewhere, the voices of civil societies are still too quit in these Urban Agenda tables, considering the immense work provided by international organisations, social movements, and independent citizens initiatives. Networking is a necessity not to fuel the economy of empty talks, but rather to expand alliances at a European level between governments, cities initiatives and civil society to open up new venues.

Europe is challenged and its very existence also depends on its response to this current migration crisis. The question lies in how to escape the false dichotomy between policy security and solidarity, protecting the absurdity of the fortress Europe in a world of global changes. Massive migration is not a sporadic event and solutions should be sought in rethinking the way inequalities are created.  In the words of Zygmunt Bauman

I don’t believe there is a shortcut solution to the current refugee problem. Humanity is in crisis — and there is no exit from that crisis other than the solidarity of humans

[1] Directive 2013/32/EU of the European Parliament and of the Council of 26 June 2013 on common procedures for granting and withdrawing international protection the Common European Asylum System (CEAS)  currently under a process of reform see “TOWARDS A REFORM OF THE COMMON EUROPEAN ASYLUM SYSTEM AND ENHANCING LEGAL AVENUES TO EUROPE” Brussels, 6.4.2016 COM(2016) 197

[3] EU level funding for undocumented migrants is limited to food assistance for extreme poverty (Fund for European Aid to the Most Deprived - FEAD) or return (through the Asylum, Migration and Integration Fund - AMIF). Other funding mechanisms manged by DG REGIO or DG EMPL (including the European Social Fund - ESF) are restricted to migrants regularly residing in the EU, asylum seekers, or recognised refugees. See PICUM