Wingham Rowan, Director of Beyond Jobs, argues that cities have a key role to play in making new labour markets work.

“I agree, if city governments really grasp this, it would change everything. But I don’t think they will.” The speaker – last Friday – works for one the world’s biggest technology companies. Now he leads their thinking around the future of “Sharing Economy” transactions.

The crude image of governments slow to adapt to changing labour markets is widespread. It is a problem because Silicon Valley is channeling billions of dollars on the assumption public bodies are either irrelevant to “Sharing Economy” markets, or just a problem to be overcome.

But this part of city economies is important. Demand for hour-by-hour labour and resources could total 5% of GDP when World Bank data is analysed. Bookings are in sectors like: on-demand care at home, collecting a neighbour’s shopping, people doing odd hours at peak times in a café/shop/bar/distribution centre, babysitting, renting out possessions or accommodation, ad-hoc cleaning, repairs or home tutoring. There are thousands of categories like this where citizens seek non-regular earnings.

As URBACT participants know, cities are seeking innovative solutions in a world of fragmenting employment. The My Generation at Work initiative, led by Rotterdam and including Antwerp, Torino and Glasgow was driven by technically aware young people. The Youth and Jobs workstream looks at cities as solutions for market failures that leave so many of Europe’s young people without job or prospects.

It is a good time to be looking at these issues; welfare rules are changing. Britain’s Universal Credit, for example will eventually encourage claimants to do whatever work they can while not being cut off from benefits. That contrasts with current rules that penalize anyone taking a few hours of work.

This article explores how a city could shape it’s own vibrant, empowering, market for all sorts of ad hoc work. Doing this successfully would focus technology giants, financiers and local software developers on profitably enhancing that platform rather than undercutting regulation. Doing it need not require significant expenditure, only willingness to align public facilities to drive new types of marketplace.

The rise of ad hoc work

Getting citizens into quality jobs must always be a priority in employment policy. But there are people who must find odd hours of work that fits around other commitments. They too might be worth supporting.

These people may be carers, those with recurring medical conditions, parents with complex childcare, students on a low income, anyone starting a home business. They need employment that fits around their ever-changing schedules. Accenture research suggests 22% of the population is in this situation at some point each year. Benefits changes increasingly push these people to seek more work as state support diminishes.

Many citizens who show in official statistics as in a job also seek odd hours of work. Zero Hours Contracts have increased 400% in 5 years in some parts of Europe, whilst the growth of irregular work is a universal phenomenon. Employees who may not be called in tomorrow will need to find extra hours elsewhere.

Silicon Valley is working hard to meet the growing need for irregular economic opportunities, often undercutting regulation as they do. Cities including Berlin, Milan, Paris and Madrid have acted against websites like Uber and AirBnB which create unregulated competition for local businesses. 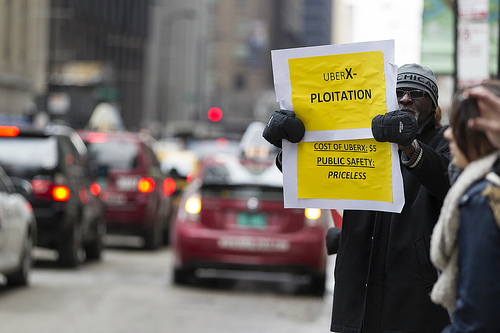 There are other problems with many of these markets. Each focuses on a tight niche, because dominating a niche is so attractive to investors. But it limits opportunities for workers to progress to other forms of work. Transacting is time consuming, the risk of transaction failure is high. Markets are high-overhead. Data about patterns of supply, demand and pricing are negligible so, again, workers never know what their best opportunities are.

Websites for irregular economic activity spend heavily on marketing. The reality of working this way for many can be glimpsed through articles, personal stories and unmoderated feedback.

European governments spend billions a year to make their markets for jobs as efficient and inclusive as possible. They do very little for people who need a few hours of work today, maybe a few tomorrow.

The UK’s government has led the way towards an approach built around the needs and potential of each irregular worker. This author oversaw a variety of projects for multiple public bodies that foresaw today’s trends in employment. That has produced 6 key learning points:

1) Quality of marketplace is the crucial issue

Traditional employment support mechanisms can be of little benefit to irregular workers. Their key to bookings is reliability, rather than just sector specific skills which can be hard to predict in such fast evolving markets with disparate opportunities.

To demonstrate reliability, and to deliver all sorts of other objectives, the worker is reliant on a marketplace. Someone in traditional employment will access the jobs market every few years, when it’s time to move on. An irregular worker can be hired several times a day. The quality of the forum in which that happens is crucial to their life chances.

Current marketplaces for irregular work lack efficiencies now common in other parts of the economy. It is worth making a purchase through Taskrabbit, Taskpanda, Homejoy, Getyourjobdone, Handy, My task angel and Hassle.; all leading markets spending heavily to dominate city markets for home cleaning or errand running.

After this, buy a book on Amazon. It is so much faster, simpler and more concrete. The work involved in making bookings of ad hoc workers is widely believed to be suppressing demand and driving activity into the shadow economy.

Irregular work markets need to make booking workers as easy, reliable and low overhead as ordering from Amazon. That sounds easy. The challenge is to ensure that every worker offered is: (a) working on their own terms at times of their choosing (b) priced according to their willingness to do this booking (c) legally compliant for the booking in every respect (d) on track to better opportunities. The market needs to gather all the data required for anyone to make informed decisions about their trading.

Workers need vetting, insuring and supporting. So the market has to welcome an array of agencies, employment services and brokerages, giving them commercial incentives and control if they participate. But it has to squeeze out overheads.

Surprisingly, this technology exists, funded by different parts of the UK government from 2005 to 2013. It’s called a CEDAH: Central Database of Available Hours. This author oversaw some 20 launches of CEDAH style markets in different parts of Britain. From that experience comes the next point.

A basic website listing, perhaps, dog walkers for pet owners to browse, then contact, can be launched easily. It is immediately useful; more convenient than working through Yellow Pages type listings or seeking adverts in shop windows.

But an advanced market for this sort of ad hoc work is harder to launch. The easiest way to explain this is to look at the way markets for travel have evolved. In the 1980’s an intending holidaymaker called or visited a travel agent. In the 1990’s sites like airlinecontactinformation.com (no longer in existence) allowed users to say where they wanted to go then listed contact details of all carriers on the route so consumers could call round and check availability/pricing for themselves.

By the 2000’s services like Expedia emerged. They instantly assemble a buyer’s needs from a database that stores availability and pricing rules. It covers the world’s airlines, hotels and rental vehicles. As with other advanced markets, Expedia has driven up activity, profitability and convenience for its participants.

But Expedia could not just be switched on, in the way airlinecontactinformation could. Imagine Expedia with only a few random hotels in the database. Its sophistication would constantly fail to find what a traveller sought, returning a “sorry can’t help” message. It needed scale to deliver its potential.

Expedia launched only when the Microsoft Network, with its tens of millions of users announced they would make it their travel channel. Access to that huge new block of demand drove providers to immediately start listing availability. The way a market is made becomes more pivotal the more sophisticated the marketplace.

Government bodies are the biggest single buyer – directly or indirectly – of irregular labour in all sorts of sectors (examples include: childcare, care for older people, public realm, housing, events, data entry and so on). They have the databases of who is licensed to do what. Employment support budgets and organisations are in their remit.  Leaders have multiple levers they can pull to promote new economic initiatives.

These facilities, and some sophisticated technology, could be aligned as foundations for a state-of-the-art market for all sorts of ad hoc work in a city. Any citizen can sell their time across as many types of work as they want (and are legally allowed to perform). Any public service, business or household can book instantly at low overheads.

To get a market started in any city, there needs to be – at minimum - £1.5m or 2m Euros of demand for irregular work to go into local communities through the new channel. It is public bodies where this initial demand is most easily found: city government, housing bodies, care providers.

There are barriers; many cities have monopoly agreements with commercial agencies that stop their biggest budgets going direct to the community. Procurement rules can stifle innovation. Central funding, performance targets and political priorities can all mandate pushing people into jobs as the entire employment strategy.

But a lot has been learned in the UK about the most effective ways to root out this demand in any city. There is a honed process that requires access and resource, but should quickly establish if/when any participating city could successfully launch their own advanced market for irregular work.

Lack of granular data would be one key problem for advanced markets to solve. Without them, we can only look for softer benefits of these new markets:

Many business people are convinced this potential will remain latent and cities won’t act decisively on irregular work markets. If asked why, answers tend to include: (a) market making in this context is a new requirement of public bodies, hard for them to understand and enact (b) bold visions and decisive action is for Silicon Valley; as experience launching markets in the UK shows, authorities tend to want small scale pilots committing only if they work (c) lacking solid data on irregular work growth, public bodies are more likely to commission studies than back a market based solution.

If true, that could be changing. The UK lead towards irregular work support has been slowed by uncertain progress in our sweeping Universal Credit programme. But URBACT’s ongoing work illustrates determination to tackle workplace issues. Specifically, there is now meaningful dialogue about launch of these markets with bodies in several very large US and Canadian cities. That could lead to willingness to commit in Britain.

The British technology is freely available to any city with the commitment and right conditions for launch. Are there cities out there ready to take up the challenge?

How a small Spanish town is revolutionising its local food system