Most planners and city politicians agree that urban sprawl endangers the sustainability of urban development. There is a clear conflict between the benefits of the few who get better life conditions in the suburbs and the problems of the many whose quality of life is negatively affected by the externalities (environmental consequences of land take and growing traffic) of sprawl.

The following article aims first to explore what urban sprawl is, then some aspects of the Use-Act networks are discussed, finally a concrete city case (Riga) is highlighted.

1) What is urban sprawl?

The picture below has been taken from the air before landing in Madrid. Such sprawling areas are easy to discover on aerial photographs but it is not always so easy to explore them on maps and from data sources.

The meeting of the 7th workshop towards an Integrated Urban Monitoring in Europe (IUME), organised by the European Environment Agency in Brussels in February 2014, aimed for a good definition of urban sprawl which allows for precise measuring of it.

According to the definition of Jaeger and Schwick (2012, 2014) the degree of sprawl is higher when more area is built up, buildings are more dispersed in the landscape, and the utilization intensity of built-up areas is lower (i.e. the land uptake per inhabitant or job is higher). All these measures are put together into the Weighted Urban Proliferation (WUP) index of urban sprawl.

Of all Swiss cantons it is only Zug and Geneva where urban sprawl decreased in the last twenty years, due to densification policies. The most positive example is Zug where the canton and the municipalities introduced new regulation in the master-plan, allowing higher density in already built-up areas while constrain the use of new areas for building. It is important to emphasise that densification does not mean at all that people have to live in high-rise housing.

The forecasts for 2050 show that with no change in national planning regulations sprawl in Switzerland would increase again with the high pace experienced in the 60s and 70s. This would lead to dramatic negative consequences regarding land cover, local climate, emissions and pollutions, water and groundwater, flora and fauna. Also the economic effects would be substantial as the costs of public services are much higher in sprawled areas.

Switzerland is among the European countries with the best planning regulations, such as the protection of forests since 1888, regulations against air pollution (80s) and against water pollution (90s). The first federal regulations related to sprawl, limiting the extension of settlements, dates back to 1979. It is a threatening fact that despite the detailed planning frameworks the built-up areas increased dynamically as municipalities are almost totally independent in designating new building zones.

As a consequence of the growing pressure of people the Swiss Parliament proposed a revision of the Federal Statute, limiting new building zones to the predicted population growth and introducing levies on the increase of property values as a result of designation of new building zones. This proposal was accepted in a referendum in 2013.

WUP is a composite indicator, put together from different aspects which themselves are quite difficult one by one. Politicians love such kind of synthetic indicators as these give the illusion of easy understanding and interpretation of difficult problems. However, many experts think that it is more justified to use the three aspects, from which it has been created, separately. If the main aspects are dealt with separately than also policy makers understand better which can be the potential interventions (regulations).

Urban sprawl issues have already been addressed by some of the URBACT projects, such as Lumasec and the ongoing Use-Act network. Also the URBACT Project Results (2011) booklet deals with the issue in the Metropolitan Governance chapter. In the future the topic of urban sprawl will become even more important for URBACT III, as two of the prioritised specific objectives are linked with environmental issues.

The ongoing Use-Act (Urban Sustainable Environmental ACTions) aim to connect the efforts against further urban sprawl with the densification of already existing urban areas. In order to avoid further land take integrated policies and tools are needed aimed at improving the urban growth management planning framework, coupled with sustainable urban interventions for the reuse of underutilised, vacant or abandoned land in existing settlements, both in historic districts and in more recently built areas. The three main parts of the Use-Act work are the following:

The Use-Act network is lead by the city of Naples and involves 8 other partners from different parts of Europe.

Riga is one of the partners in the Use-Act network.

The functional region of Riga has stable population around 1.1 million. There is, however, a dynamic population restructuring within the region. Riga city had thirty years ago almost 900,000 people, now the population is little less than 650,000 and the forecast for 2030 is 500-550,000. The next decade is thought to bring 10% population decline in Riga city while 15% increase in the agglomeration.

The population-wise shrinking Riga might be called the European capital of empty spaces as 15-20% of buildings stay empty in the city. In the Tsarist times it was the third largest centre after St Petersburg and Warsaw, in the Soviet times it was a large industrial centre. All these periods have left their “heritage” on the city in the form of different types of brownfield areas.

The two decades of independence of the country were dominated by market-led development through privatisation of public assets and decentralisation of decision-making. These circumstances have led to extensive development: all the residential, commercial, industrial investors aimed for empty, green-field areas, leaving behind the deteriorating buildings in the previously built up areas.

According to present plans enormous areas are aimed for further new developments in the suburbs around Riga. Some surrounding settlements aim for 3-4% growth per year turning all types of available land into development opportunities, including previous allotment parcels (Soviet garden cities for recreation of workers of the kombinats…) or the famous recreational resorts which are today in a totally dilapidated state.

In the shadow of the new green-field development ideas are the existing brownfields, many of them very close to the city centre. One of these is the Andrejsala river-front area with good opportunities but hard heritage of the previous port which has been moved out further away form the city. For the time being only a private development company is active in the area, collecting ownership of plots in the hope that the public will make sooner or later a general plan and the plots can be sold out to developers.

Andrejsala 100 years ago and the partly abandoned industrial buildings of the Soviet era (photos: Riga Planning Region and Iván Tosics)

As Use-Act project member, Riga Planning Region aims for more compact urban development. The planning region wants to activate municipalities around Riga to cooperate with each other in order to find together solutions to the mounting problems. The LAP is concentrating on four different types of sprawling areas: sprawling meadow villages (on restituted agricultural land divided into parcels), allotment parcels which were illegally turned into residential areas, abandoned previous industrial areas, deteriorated resort areas. 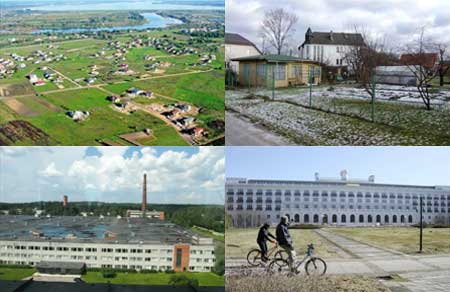 The LAP aims to explore feasible growth management tools while dealing also with concrete sites. The task is not easy at all until most planning power is at the municipal level and the national and regional level has only weak planning power and very limited political will to step up stronger in the defence of public values.

Submitted by ivan.tosics on 16 February 2015