The Journey of the Belgian city in the Civic eState Transfer Network, and its special exchange with Barcelona, Amsterdam and Naples

A church and an open call to manage it collectively

In 2018 the slot conference of the URBACT project Refill concerning the temporary use of vacant spaces took place in the beautiful Saint Jozef Church, in Ghent. At that time, the City was planning on buying this church and 'giving it back' to the neighbourhood citizens. After the positive experience in the Refill project, Ghent decided to participate in the URBACT project Civic eState, concerning the co-management by the city and its citizens of city assets and chose the Saint Jozef Church as its main pilot project. 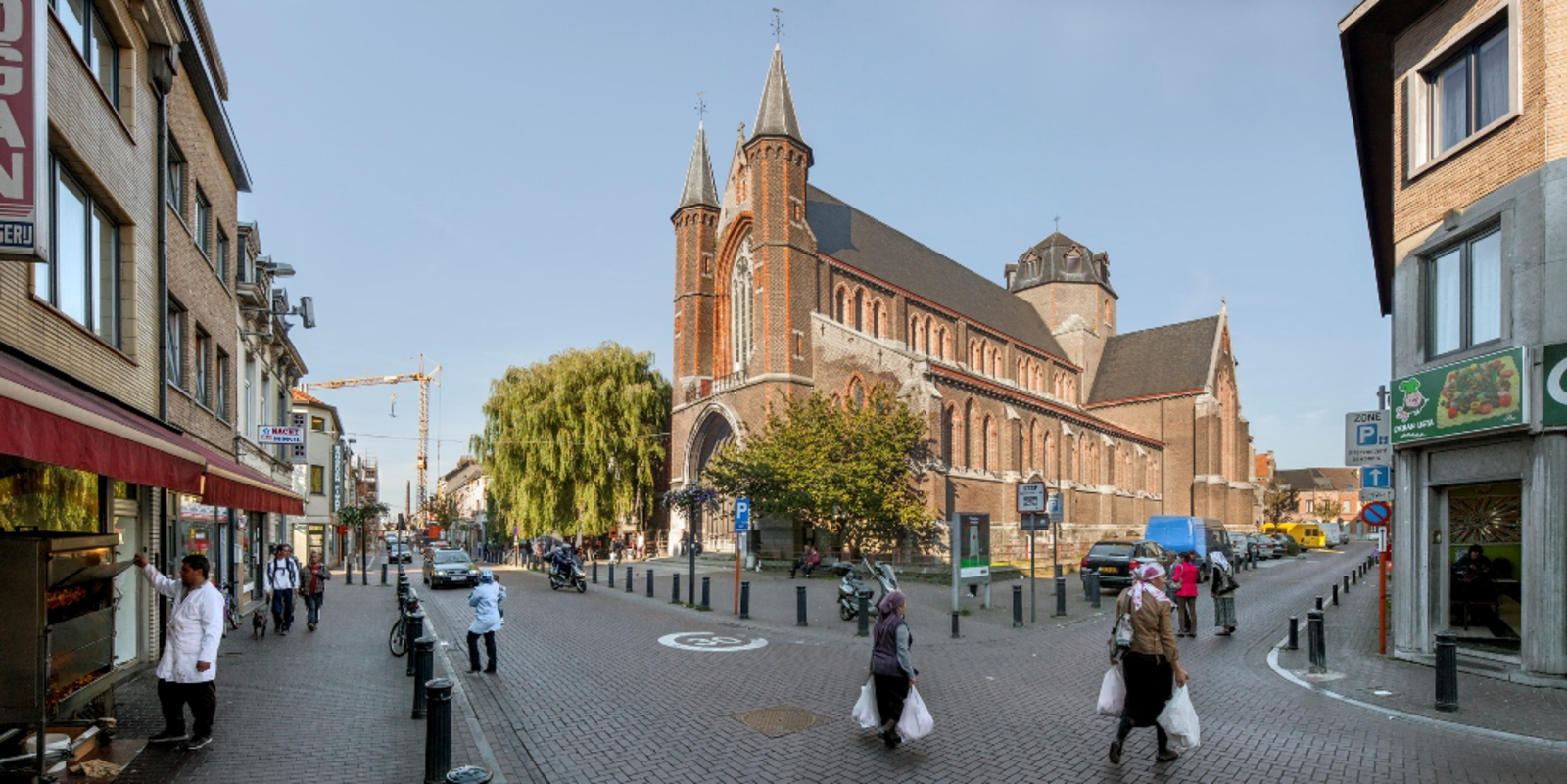 The main goal of Ghent’s Team in the Civic eState project was the launch of an open call to find a coordinator for the Saint Jozef Church. This Church is located in the Rabot neighbourhood, one of the poorest and most multicultural neighbourhoods of the City. It has more people receiving benefits, more low incomes, more unemployment and more single-parent families compared to the rest of the city’s districts. Rabot is also known as an arrival district, where there is a general rotation of 10% of the residents each year. In the diverse neighbourhood, 70,5 of the residents are of foreign descent (District Monitor Ghent, 2019) and there are more than 90 nationalities. In this neighbourhood, community development workers assist citizens to become active and organise themselves to respond to issues and opportunities that can help both the neighbourhood and their own personal development.

Exchanges with other Civic eState’s cities helped Ghent to think about how to find a good manager in an open, participative way. Ghent is learning from cities like Barcelona, Amsterdam, Gdansk on how to enhance its own city policies in this regard, having a few principles in common such as sustainability and inclusivity.

Following the URBACT methodology, Ghent brought together the commoners, citizens, organisations from the neighbourhood to form the Urbact Local Group (ULG), which is actively involved in the project. The ULG defined the needs of the neighbourhood and the guiding principles of the assignment of the future coordinator which were translated in the text of the open call.

Ghent also created a cross-departmental task force within the city administration that works on the project. The task force is composed of civil servants of the policy participation service, the real estate service and the legal service. This cross-departmental approach has proven to work so well that Ghent decided to use this approach in other projects, such as the Neighbourhood Budget Project.

Along the way, Ghent’s Local Administrative Group stumbled upon several problems concerning the pilot project. Besides the COVID-19 pandemic, there were safety, financial and insurance issues, and all this made it impossible to launch the open call in spring 2020 as planned.

The open call was launched on March 1st, and the coordinator will have to come with a threefold plan that encompasses the organisation of the use of the Church by citizens and organisations, the maintenance of the Church building and the creation of the democratic and economic management models for the Church. The coordinator must do so in respect of the guiding principles, e.g. all aspects of the plan must be community-oriented and take into account the specific needs of the diverse and colourful neighbourhood the Church is located in. 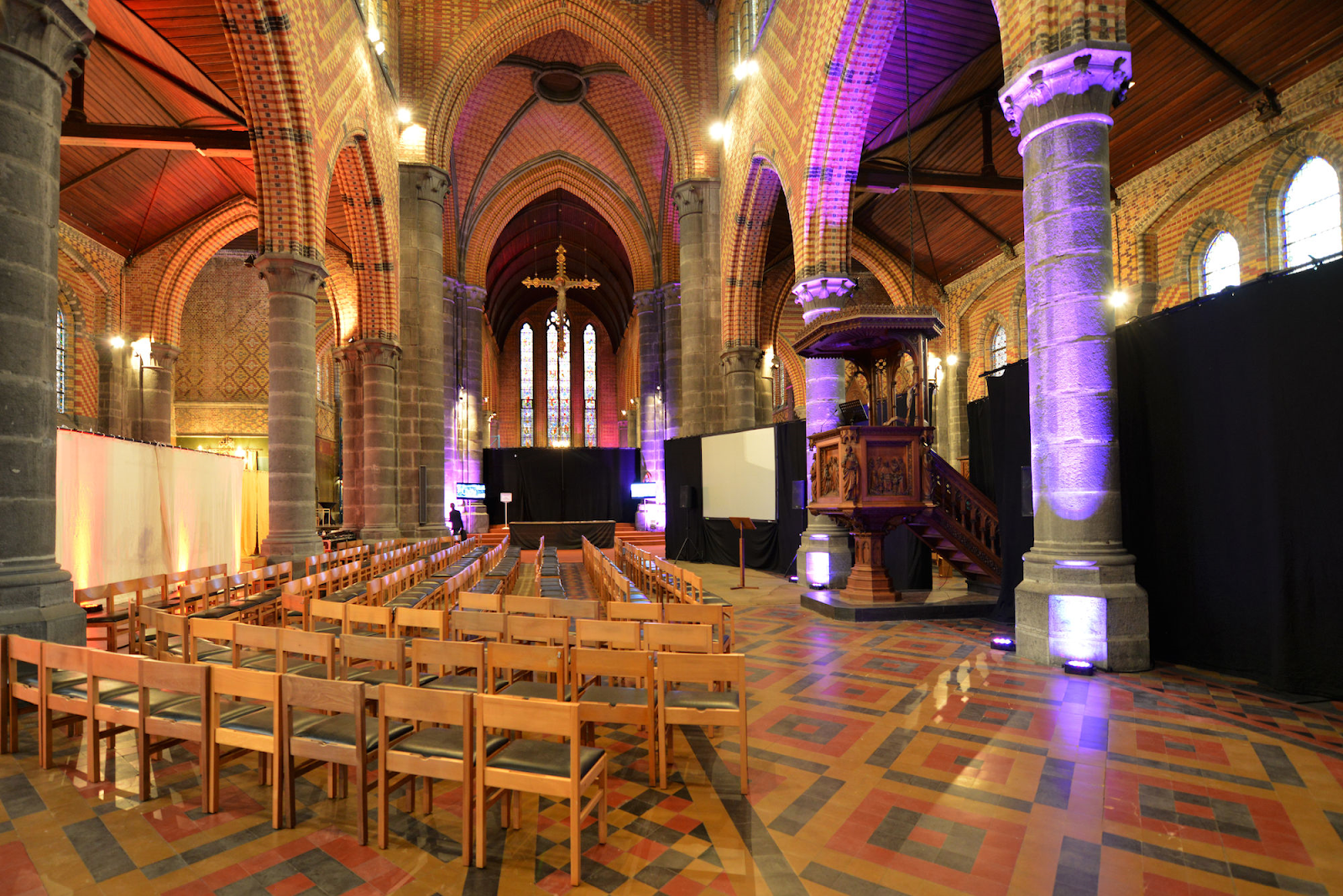 Ghent has a long tradition in participative approaches, with the former Mayor Daniel Termont as the strongest supporter in participation and co-creation. Since the 90ties the City created a policy participation service within its administration that enables policymakers to integrate a bottom-up approach in planning and decision making processes. The service still exists and has developed different instruments (a participation and crowdfunding platform, the Fund of Temporary Use, the Participatory Budget, Neighbourhood Management Projects, …) to enable and support citizens’ ideas and initiatives. The political will and support in participation were extended after the elections (2018) with the assignment of a Deputy Mayor of Participation in the Board of Mayor and Deputy Mayors.

In order to connect with citizens and with society, neighbourhood managers (civil servants of the policy participation service) are building networks in the 25 neighbourhoods of the City. They deliver tailored work to create a more livable, more social and more sustainable neighbourhood, taking the role of middleman between various stakeholders to find solutions to urban challenges existing in the neighbourhood. Neighbourhood managers represent this link between the City council and the citizens.

Ghent has also been experimenting with the temporary use of brownfield sites and empty buildings for over a decade.

Often, this happens in response to urban renewal projects. The period between the development and implementation of the plans is usually very long, therefore the City of Ghent stimulates its citizens to use the sites and buildings in the interim. This brings a new dynamic to neighbourhoods and offers added value for the city’s development. DE SITE, the first iconic temporary use, started 10 years ago: allotments, a greenhouse, two urban horticultural plots, a football field, a bike playground and an urban farmstead were created on the site of the former Alcatel Bell factory in the district of Rabot. The residents rolled up their sleeves and helped to reshape their neighbourhood.

The city council provides subsidies via the Fund of Temporary Use (€300,000) and offers (cheaper) spaces to initiators of temporary use projects to help entrepreneurship of citizens to start. A lot of new temporary initiatives (each year more or less 25) occurred thanks to this Fund.

To make this possible, the neighbourhood managers in each of the 25 districts of Ghent play a pivotal role. As connectors, they are often the drivers for finding (new) solutions to urban challenges in the neighbourhood. They look for the necessary links between policy, administration and the various stakeholders on the basis of a helicopter view inside and outside the city. While they certainly were pioneers for this approach in the City, they are now backed by a vast political will to facilitate participation and co-creation and by a growing number of initiatives and (legal) instruments at the various departments of the city administration. The resulting mix consists of initiatives such as the participation platform and instruments such as city regulations and subsidy agreements, untangling this complex mix so that citizens and also civil servants find their way, together with the simplification of the administrative and regulatory procedures are now the challenges the City is facing. The sharing of information and knowledge and the collaboration between various departments is the first step in this process. 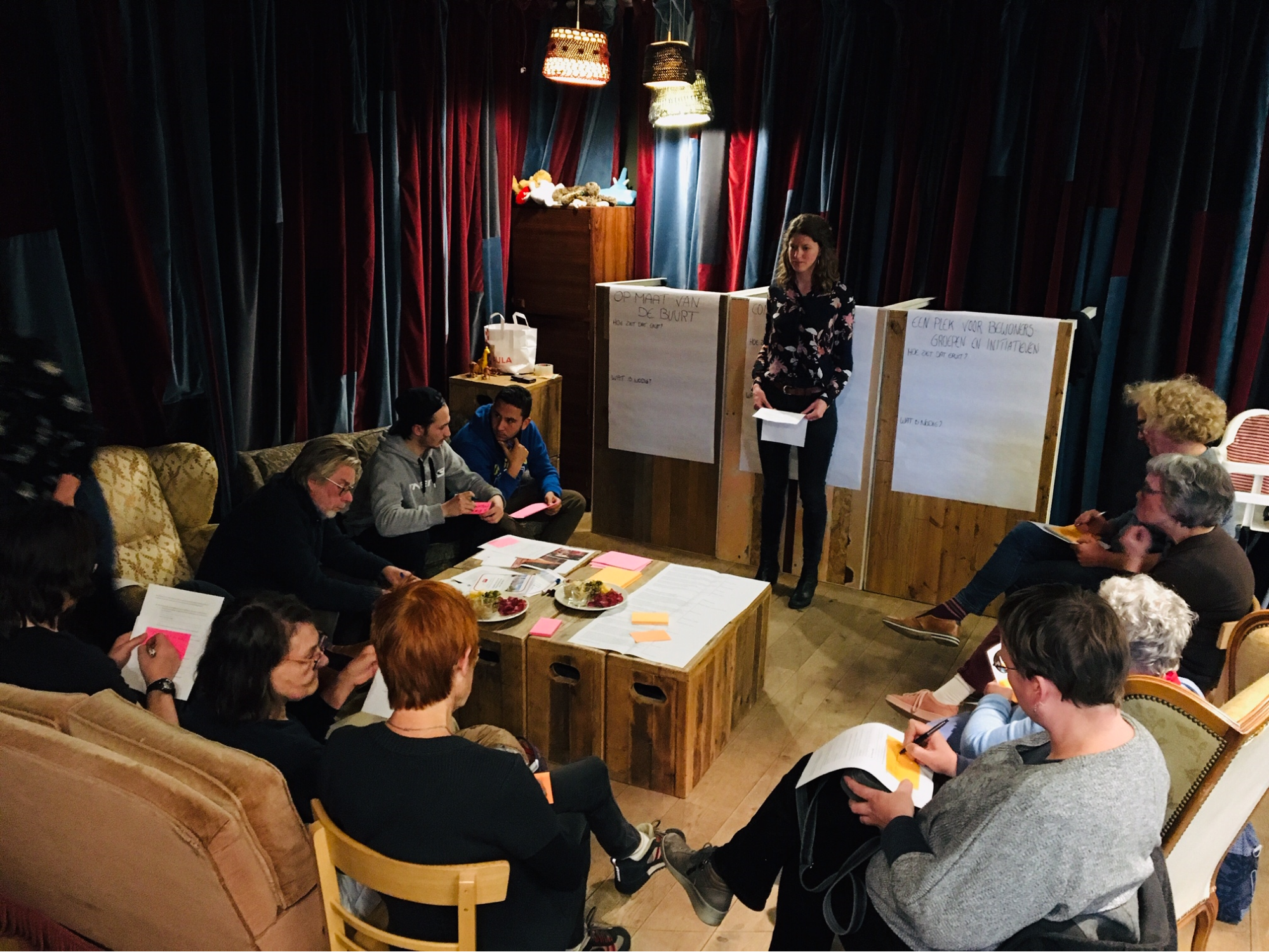 Sharing principles and tools with Naples, Barcelona and Amsterdam

During the Transnational meeting in Ghent (May 2019), all the Civic eState's partners had the opportunity to have a look at the experiences from the existing initiatives in the city: they visit a volunteer-run bazaar’ with a giveaway shop, second-hand shop and social grocery; they heard the experience of the complementary currency “Torekes” as a tool to create a network between inhabitants, local economy and civil society organizations and to promote participation in the neighbourhood; they also visited the Saint Jozef Church, the pilot project of the Citys. Residents of the Van Beveren Square unfolded to Civic eState partners their plans to turn their square into something more than a parking lot. They met the volunteers of the Food Bank that dispatch unsold products from supermarkets to local welfare initiatives and social restaurants, and the volunteers from Bloemekensforum, a non-profit association formed by inhabitants, presented their challenges in looking for a new location to carry out their temporary use projects.

These inspired the City of Amsterdam to think of an incubator for civil servants and citizens, such as a ‘commons in residence’, to nurture the layer around the government with a network of new and established civic initiatives and to create the necessary humus for local democracy.

Although it’s clear that Ghent already has a lot of experience in participative approaches and the political will to push this forward, it feels it still has a lot to learn. Participating in the Civic eState Project gave the City the opportunity to learn from other European cities, which was very enriching.

The main goal of the Civic eState Project was the transfer of knowledge about the co-management by the city and its citizens of city assets between the participating cities. In order to reach that goal, the cities had to follow the URBACT methodology. This methodology prescribes choosing pilot projects, creating ULG’s and LAWG’s, organising and participating in (transnational) meetings, sharing knowledge and delivering diverse outputs.

In order for Ghent to be able to share knowledge and to make this knowledge transferable to its partner cities, it started by inventorying the (regulatory) tools they use and presented the short version during the Transnational Meeting. It got a lot of positive responses and questions from the partner cities, and on the other way around, Ghent received lots of valuable input. The Belgian city made a point of thoroughly analysing these inputs and discussing questions with the partner cities. This was necessary to be able to filter out the inputs that are transferable to the specific context of the city.

Ghent learned a lot from the legal documents (city regulations and agreements) received from Napels and Barcelona. These documents contained interesting definitions and principles. Some of these principles, like sustainability and inclusivity, has been injected into the open call of Ghent's pilot project. At the same time, Barcelona and Amsterdam opened Ghent's eyes to the importance of measuring the social return of certain projects. 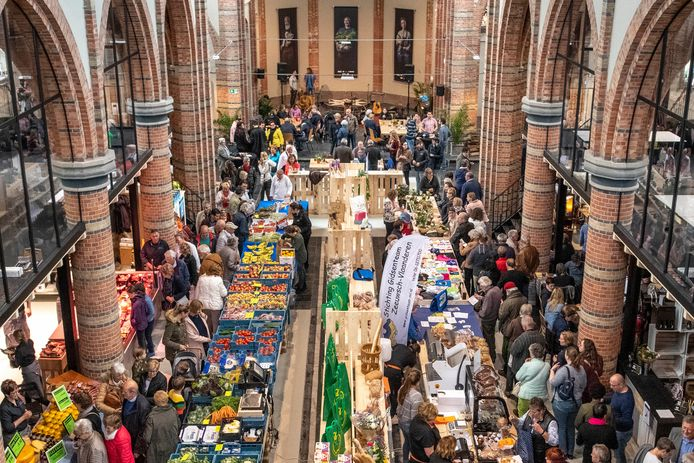 Ghent plans to bundle a lot of ideas and work towards a kind of step-by-step plan of how as a city they can improve their organization for the benefit of the commons.

The city will follow up on the open call for the St-Joseph church, assuring the selection of a coordinator for the church to be as participative as possible, and the future filling in and organisation must also comply with the "Civic eState" values.

In addition and for the city-wide level, a "catalogue" will be elaborated to sum up the work done with the open call, and what forms of involvement the city organizes for and with the neighbourhood.  In this "catalogue", the Local Administrative Working Group will make a concrete step-by-step plan together with the two services: the Policy Participation Service & the Real Estate Service of the city.

The LAWG will keep existing and make a regular consultation between different services involved in making urban real estate accessible, for example encouraging the double use of urban buildings and develop the necessary tools for this.

It is establishing a legal-administrative incubator, which will offer support to starting residents' initiatives for business issues involved in starting an initiative. In the first place, this incubator will be set up for the many new projects that are submitted via the wijkbudget.gent project, but it can also play a role in other initiatives.

Submitted by Gregorio Turolla on 18 May 2021