From community assemblies to green city walks, trials are improving urban policymaking across the EU.

The latest round of 23 URBACT Action Planning Networks, launched in 2019, have benefited from the introduction of a new feature – Small Scale Actions. For the first time, a budget of EUR 10 000 was made available to each partner city to carry out experimentation that could inform their so-called Integrated Action Plan, or IAP. This final document is co-produced in each city to encapsulate planned actions tackling a specific urban challenge, with diverse topics ranging from digitalisation to waste management.

SSAs were introduced in response to requests from previous networks to be able to spend resources on testing ideas before deciding if they should, or could, be part of the finalised plan. URBACT defined them as “an experiment. It is an idea or a concept, perhaps already tried in another city, which can be tested to check the relevance, feasibility and added value of its implementation in different local contexts. The Small Scale Actions are limited in time, scale and space and by their nature have the right to fail.”

Inherent in the process of experimenting is the possibility of failure, and the opportunity to learn from failing. This is often a new departure in policy development for cities. The SSA was therefore also a process to allow public administrations to adopt more agile ways of acting, adapting methods from other sectors such as design and tech, and to be able to test ideas for sustainable change before creating long-term action plans. It can allow cities to design and build better and quicker, to iterate, or provide evidence that something should be discontinued rather than wasting public funds.

Cities take up the SSA challenge 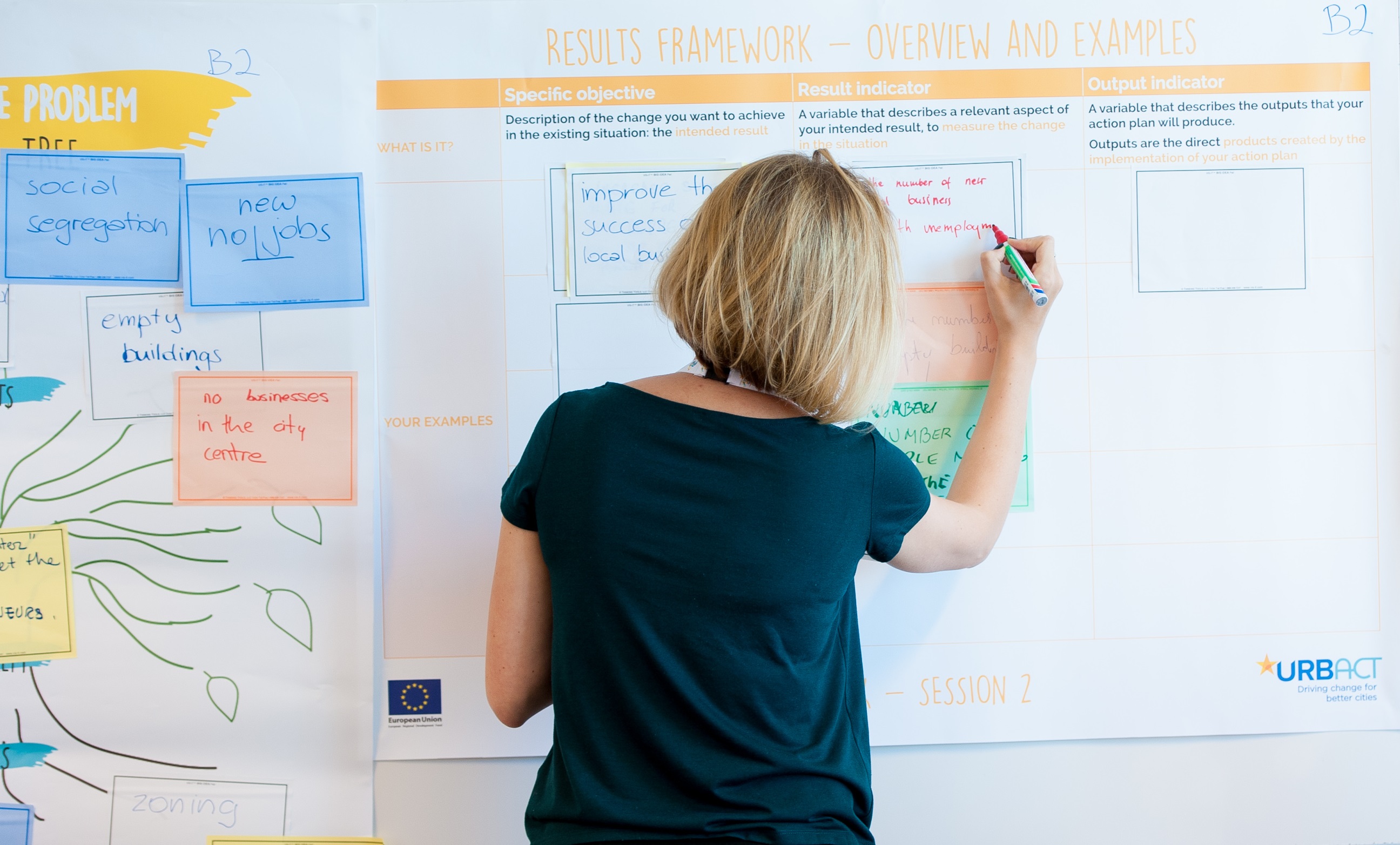 According to our most recent survey, 85% of cities in these URBACT networks took up the challenge of piloting at least one Small Scale Action over the course of 2021. With the action plans due to be finalised by June 2022, we looked into how these new SSAs have worked in practice. Did they improve the urban realm, governance processes or the lives of citizens, and what can we, as a programme, learn from them?

Given the wide variety of urban challenges undertaken by URBACT networks – from the circular economy, to sustainable tourism, to city branding – very different approaches to SSAs emerged. Most networks engaged in a process to identify which action would be most useful for them, in relation to their priorities and information gaps. In the end, events, information campaigns, new tools/methods for implementation, and small infrastructure interventions were the most popular SSAs, overall.

Here are just a few examples of the scores of local solutions that URBACT cities have trialled in 27 countries this past year, and are now ready to scale up.

To improve inclusion in neighbourhoods with low levels of cultural and community activity, new interventions were tested in Vilnius (LT). They offered different formats and elements of interaction in different neighborhoods, such as musical picnics, open-air libraries, history rooms and ‘Tea & Chats’ inspired by Dublin (IE). Meanwhile, Sofia (BG) experimented with an info campaign on access to culture for 11 to 16 year old students, a group identified as having low levels of participation. The testing included a survey among students, training for teachers, and working with a popular blogger to communicate in ways that resonate with the students. (Find out more about the ACCESS network.)
RE-USE and RECYCLING

In our environmentally focused networks, repair and re-use interventions, citizen engagement and awareness raising were tested. A project on circular textile consumption looked at how to mainstream leasing/renting models for fashion businesses, and start an operational model for the Belgian city of Mechelen. Bucharest 3rd District (RO) tried out a composting unit. (Find out more about the Resourceful Cities network.)
NEW HOUSING SOLUTIONS

In relation to homelessness, the aim was to try out, evaluate and verify what direction to take on the road towards implementing the ‘Housing First’ approach. Ghent (BE) tested a new form of collaboration between different support agencies by working in a new coordinated approach with three beneficiaries. In Toulouse (FR), a unique campaign to attract private renters through a single communication channel increased affordable private housing offers. This action proved the viability of extending the concept to the wider Métropole area. (See more information on the ROOF network.)
SMART SENSORS

New sensor technology was tested in several cities, for instance to analyse urban air quality data in real time in Razlog (BG) and communicate water temperature in the local bathing lakes in Ange (SE). Very practical lessons were learned, for example, how to avoid damage to sensors measuring rubbish collection. As a result of the testing, it is now easier to cost the amount required for scaling up.
Lead Expert Eurico Neves said: “SSAs have been very successful for us – maybe because it’s a tech-oriented project, around Internet of Things and sensors, and is easy to conceptualise and implement small solutions around a number of sensors that can be later upscaled. All cities in our network are now well advanced into the drafting of IAPs and they’re in the process of planning this upscale of SSA as part of the IAP.”
(Read more about the IoTXchange network.)
PEOPLE-CENTERED STREETS

Placemaking SSAs made a huge difference in engaging stakeholders. Implementing concrete physical changes, such as opening up streets, provoked a mix of positive, negative and unexpected reactions, and the realisation that more communication is needed, for example with shopkeepers. Actions will be modified based on these outcomes. (Find out more about the Thriving Streets network.)

Dubrovnik (HR) was very ambitious and tested a new route to move tourists and residents around. Another city took an open approach to review their accessibility to visitors with reduced mobility, wanting to learn and improve the experience. (Find out more about the TOURISM-FRIENDLY CITIES network.)

What were the challenges and what was learnt?

The short time scale allocated to these local ‘test-runs’ within each URBACT network, combined in some cases with the need for procurement, made it difficult for certain cities to launch their actions as planned. And several found that by implementing pilot actions they had less time available to devote to building Integrated Action Plans.

However, in many cities the SSA succeeded in getting local URBACT groups on board, boosting stakeholder engagement. It provided a great opportunity to act, not just discuss and plan, and for stakeholders to discuss specific tangible changes, not just ideas.

For small cities, who often have less capacity to prototype and pilot, this new process has brought a winning combination of knowledge, skills and trust. For example, thanks to the iPlace network, city partners ran hackathons to generate ideas. As a result, the Latvian town of Saldus will continue to hold hackathons regularly and allocate grants to the winners.

At local level, each city is now bringing the learning that emerged from the testing into the wider planning process. At programme level, URBACT is monitoring cities closely to see how to refine SSA guidance for the future. It seems the great majority of URBACT partner cities surveyed are convinced that piloting is a helpful tool for implementing their Integrated Action Plans, especially in gathering evidence and establishing proof of concept.

Liat Rogel, Lead Expert of the ROOF network, said: “Failing or succeeding, the Small Scale Actions all help the cities to make more effective action plans. There is a real strength in the opportunity to iterate through one’s own experience and that of others.”

“In many cases SSAs introduced a new dynamic, that should be continued and embedded in future planning and delivery,” said Adele Bucella, Head of Programmes and Projects at URBACT. “Cities took ideas from each other and learned together, for instance how to work with stakeholders, how to measure impacts. This local testing de-risks the intended actions and makes them more investable. The next stage of the process is to make sure that the learning from the SSA is well-integrated into all the IAPs.”

Submitted by Sally Kneeshaw on 05 January 2022