How adapting Manchester’s model of cultural collaboration on climate action and engagement has driven change for the better in Šibenik.

By Nikolina Gracin, Department of Economy, Entrepreneurship and Development, City of Šibenik 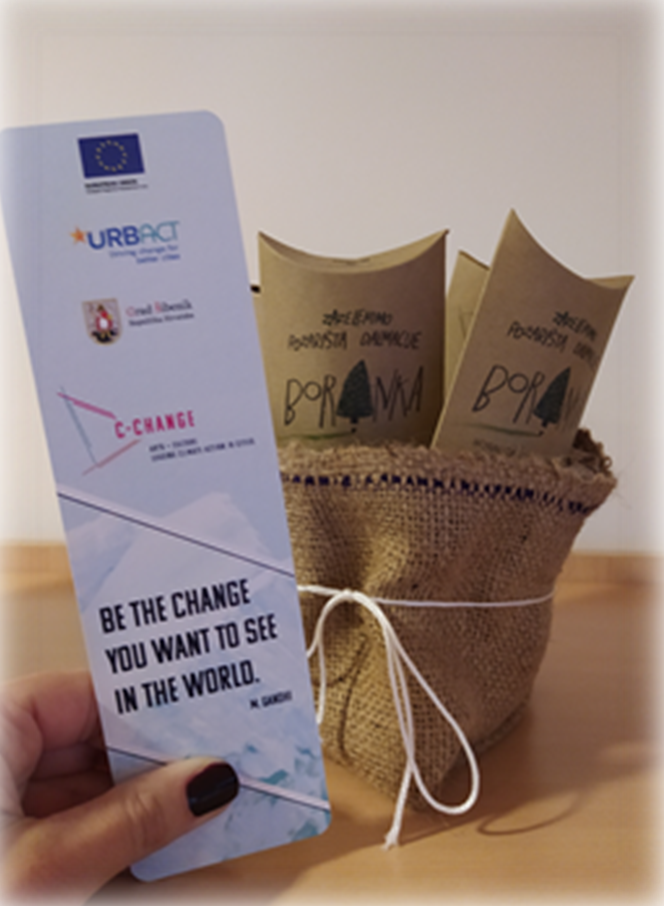 “Be the change you want to see in the world”. This famous quote from Mahatma Gandhi became Šibenik’s mantra in January 2019, when we met with five other cities in Mantova, all part of a new network called C-Change.

Climate change is real, happening and now. Global temperature rise may seem an abstract term, but we can see and feel the consequences all around us: from drought and forest fires - something we sadly are no stranger to in Šibenik – to damaged homes and increased health risks. We can expect these consequences to make themselves increasingly felt in the future and we all need to do something about it.

C-Change: Arts and Culture Leading Climate Action in Cities is an URBACT-funded network of cities aiming to build on and learn from Manchester’s model of cultural collaboration on climate action and engagement. Šibenik saw its participation in C-Change as an opportunity to engage on climate change with its citizens through the arts and culture.

Šibenik is a historic city of 46,000 people, positioned in a deep bay which is one of the most naturally protected harbours on the Adriatic coast. The decline of our industrial base meant people could swim in the sea, a skyline no longer dominated by black smoke and lower greenhouse gas emissions. Now tourism is the basis of our economy, rich as we are in natural and cultural resources and heritage, including two UNESCO World Heritage Sites, and surrounded by two national parks. We want to avoid the negative environmental impacts which larger Croatian tourist destinations have suffered and base our tourism on the protection of this heritage and these resources. We want to preserve this for future generations. 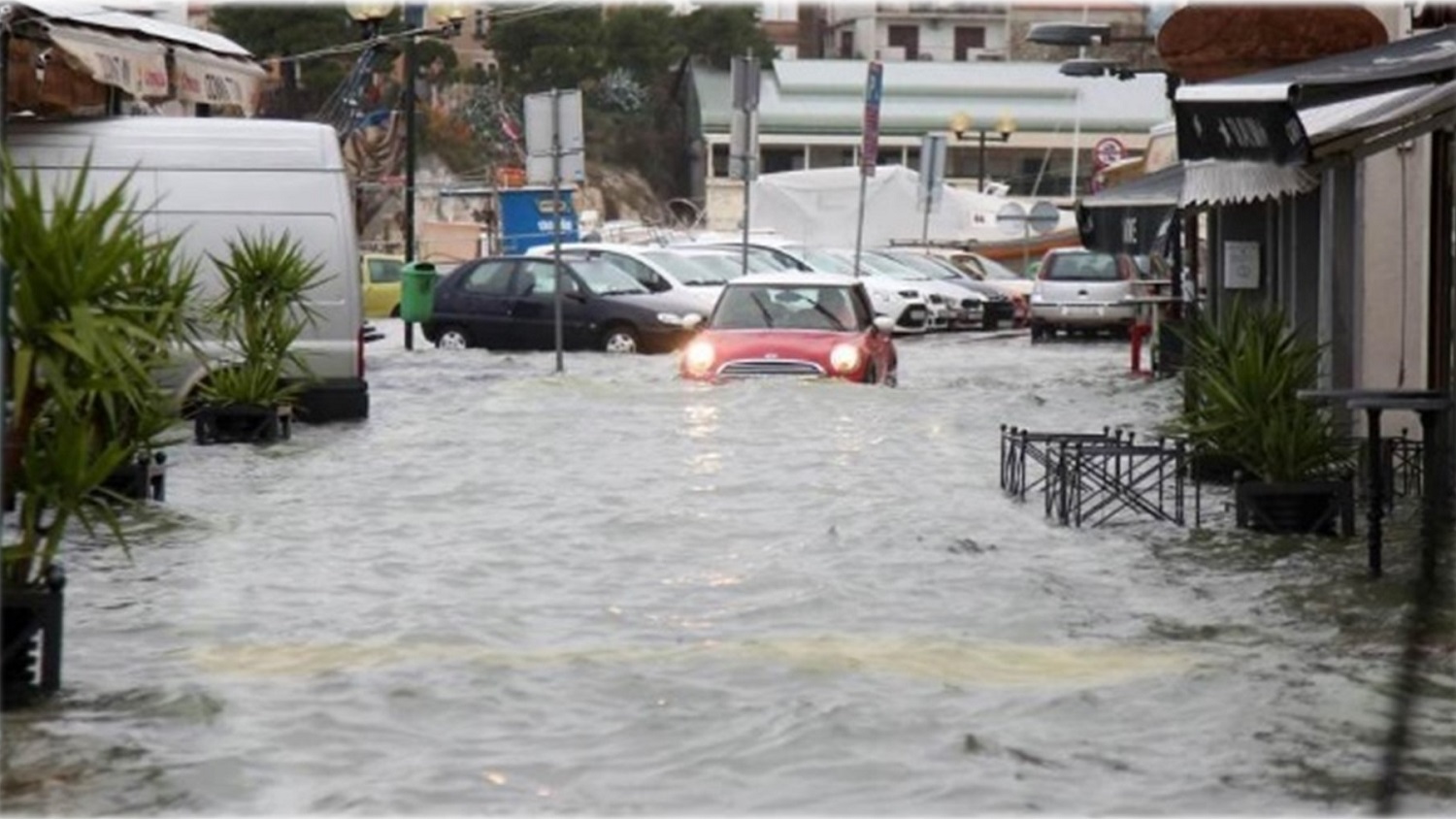 And yet now we are feeling the consequences of climate change - rising sea levels, flooding and forest fires. But the people of our city, especially the older generations who had seen our air and water get so much cleaner, had not really understood the link between what was happening in our city and global temperature rise. And this is why Šibenik joined C-Change. Because, when we first learnt about what the arts and culture in Manchester was doing when they came to visit us in 2018, we thought this could be the way to connect with our citizens and drive change for the better on climate.

Through a series of international meetings with Manchester and four other cities - Gelsenkirchen (Germany), Wrocław (Poland), Mantova (Italy) and Águeda (Portugal) we learnt more about the Manchester Arts Sustainability Team. How did the group work together? What kind of support did they have? What part did they play in city climate change strategy? And, last but not least, what were they doing to reduce their impacts and engage with audiences and communities on climate?

Working to the URBACT methodology, and guided by Claire Buckley, our C-Change Lead Expert, we worked out what we thought we could realistically put in place in Šibenik over two years. We came up with a plan for how we might do this and created a local C-Change group to shape and make this a reality. And along the way we also were able to exchange our progress and challenges with the other C-Change cities, providing us with further inspiration.

Our plan focused on sector collaboration on climate action and engagement and support for the sector to help them do this, with the Department of Economy, Entrepreneurship and Development (DEED) as project lead. While in the other C-Change cities, it was usually a combination of culture and environmental department representatives who took on this role, DEED’s involvement brought some unexpected benefits. But we will come to that later.

At the start, following Mantova’s example, DEED did a survey to find out what the people of our city thought about climate change. We also did a series of one-to-one meetings with representatives of city cultural organisations to explain what Manchester had done – it was a unique concept and took some explaining! – and encourage them to be part of our local group. And it worked. 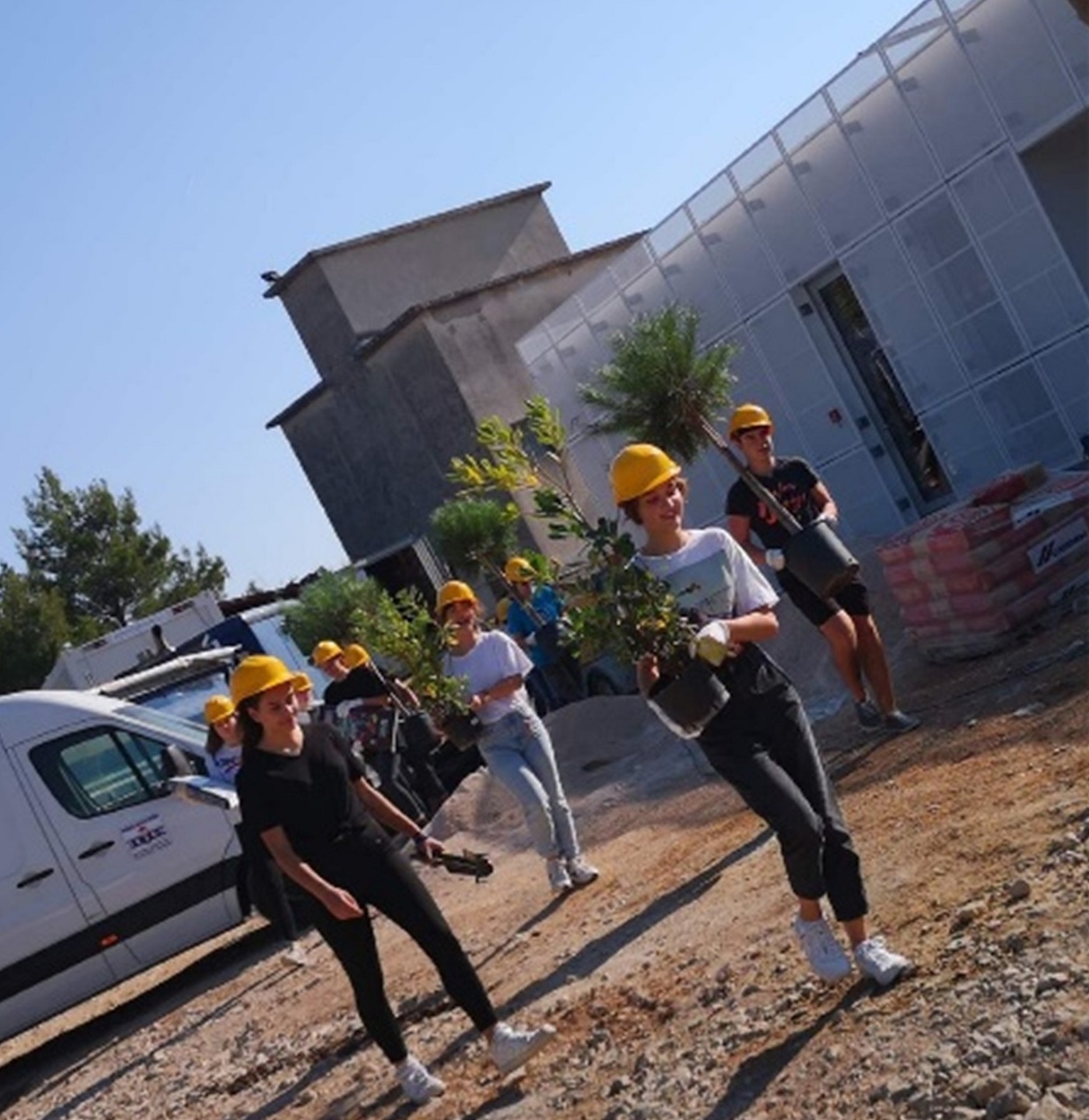 The local C-Change group started out in early 2019 with about 10 members, mainly city-run organisations such as the city library and city museum, with DEED as group co-ordinator. Once we had agreed our plan of action, together with local high-school students, we took our first collective action, participating in a day of tree-planting. After a few months Ana Šimić from the city library became group co-ordinator. As time went on, and particularly when we started connecting with people as we organised the city’s C-Change Festival, new members joined and the group became more of a mix of city-run and 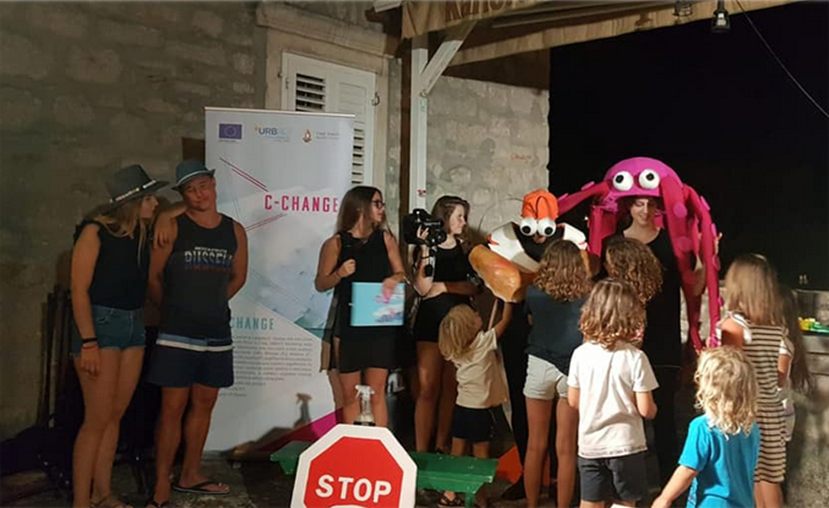 In summer 2019, with a modest sum, we launched our C-Change pilot action programme. Eight project ideas were submitted and three selected: ŠI Plastic Free a collaboration between Šibenik’s Library Association and Polytechnic; Zeleno Volim/I Love Green workshop series led by the Juraj Šižgorić City Library, and; Take a Break from Plastic, a collaboration between a families’ association from Zlarin island (just off the coast), the For Zlarin Without Plastic initiative, a cinema club and Zlarin Tourist Board, to raise children’s awareness about sea pollution through theatre. Despite Covid restrictions, over 600 people had participated in a total of twelve different activities, and two new initiatives Schools Without Plastic and Archipelago Without Plastic were created. 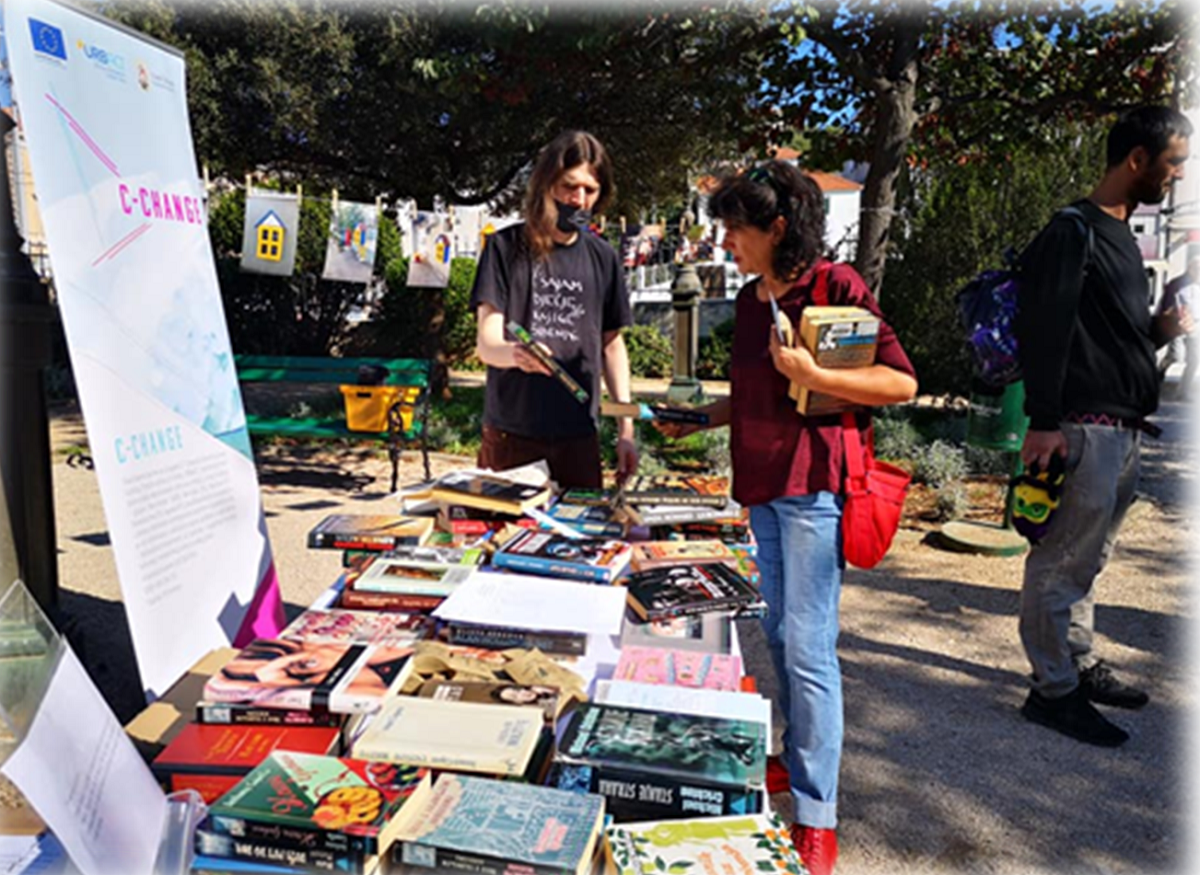 The Juraj Šižgorić City Library which led the I Love Green pilot action, is much more than a place to borrow books. It is a modern venue which runs a range of talks and workshops for different age groups, in the library and beyond. I Love Green involved three workshops on composting and natural cosmetics, three environmental talks for about 160 high-school students and an environmental art competition for primary school students. The librarians’ engagement in I Love Green was exceptional and they showed how they could act as drivers for change in the city. 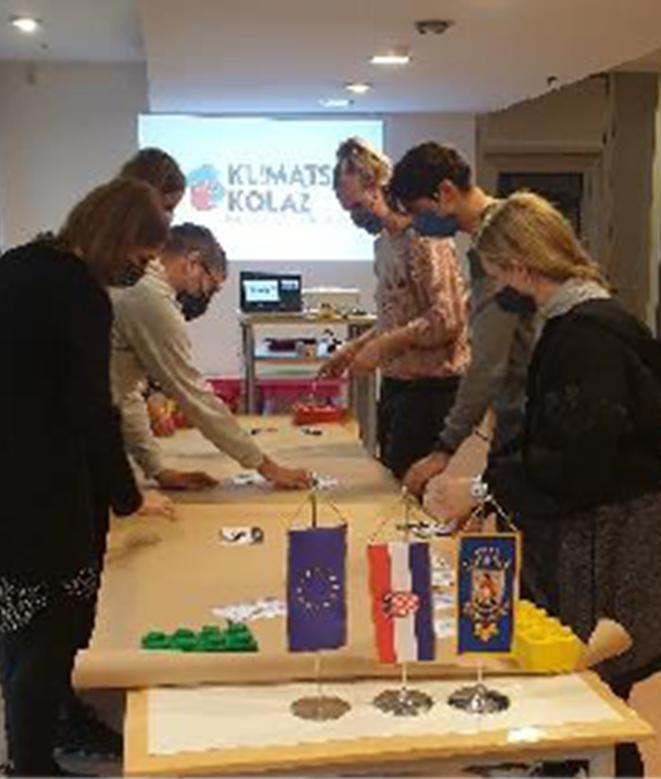 The Juraj Šižgorić City Library was also host to carbon literacy training for 15 people in October 2019. We had learnt about this approach and seen how it was delivered in Manchester. We knew we had to make our version both instructive and engaging. This task fell to our trainer, Ivana Kordić, an activist involved in the Zlarin Plastic Free Island initiative. Ivana incorporated Climate Collage, an educational game, into the training which proved very effective. Our training will be officially certified by Manchester’s Carbon Literacy Project and we are also hoping to run further training for cultural organisations and other sectors. 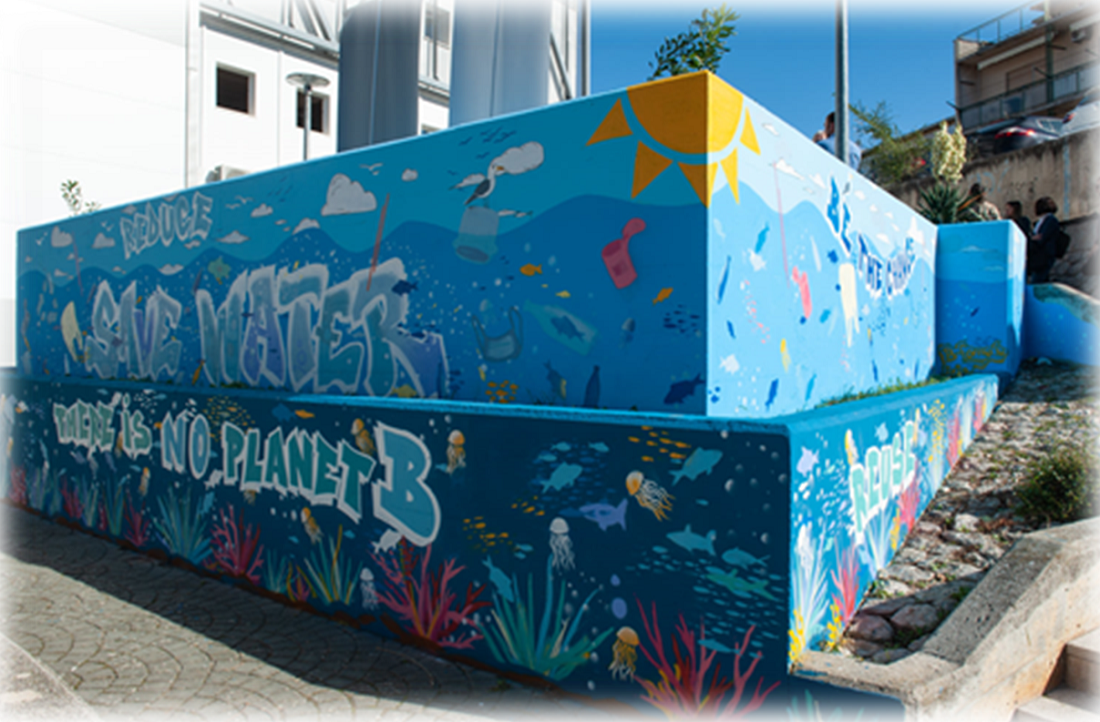 After many Covid-related ‘back-to-the drawing-board’ moments, our month-long C-Change Festival finally kicked off on the 28th of September 2020, the eve of the day of St. Michael, our city's patron saint. We knew this could be something special and we were right. Over thirty days, ten events - from environmental art and photography exhibitions to pop-up environmental book stands and a new installation on sea-level rise - engaged our citizens on a range of environmental and climate-related themes. We also distributed our new C-Change materials during the festival: bookmarks, canvas bags featuring a primary school child’s entry to the ŠI Plastic Free art competition, and packets of pencils made from the burnt remains of a forest fire. For each packet, a tree was planted - 500 in total. We now have two permanent art installations as reminders in our city and are committed to making the festival an annual event.

DEED was used to dealing with infrastructure projects with much bigger budgets than C-Change. We were more funding and project-driven and not well-versed on culture and climate. Being involved in C-Change increased our own awareness of climate change and why it was so important to act. We started to make small changes in our personal lives. We saw what could be achieved by combining our project management skills with the creativity and reach of the arts and culture. Indeed C-Change brought out our own creativity. In the end, we have achieved more than we thought possible. DEED more actively seeks out funding for environmental and climate projects. As the department responsible for the biggest part of the city budget, in a city starting to develop a new integrated strategy, we will be able to advocate for climate action and for culture as a key player in this process.

In the very early days of C-Change we were unsure as to what the arts and culture really had to do with climate change. Now we know. We have seen how it can connect people with the issues, making the global, local, and how effective this can be. Ultimately, we understand better that each one of us has to do something and how even small changes can make a big difference.