Home » Inclusion » Solidarity with the refugees. Ghent: an inspiring city for Europe

Solidarity with the refugees. Ghent: an inspiring city for Europe

The city of Ghent (BE) has been awarded an URBACT Good Practice for its policy towards refugees that fled wars and conflicts to find a new home in Belgium. This Good Practice, called “Refugee Solidarity” has been managed through the Refugee Task Force set up in Ghent in August 2015, an innovative action recognized for its quality and success factors at European level.

Maher is a Syrian refugee who came to Belgium two years ago, fleeing the war in his country and leaving his family behind. 32 years old and now fluent in Dutch, he has found a job in Ghent. A former salesman in his country, who studied history at the university, Maher is now, as Elmira Zeynalyan, job hunter for refugees, says a “great success story”, showing the important achievements reached through the Refugee Task Force in integrating and welcoming refugees.

The story of Maher is one out of many stories of men and women reaching the European Union to find a new and safer home. As many cities from all parts of Europe have faced challenges linked with the arrival of new migrants from the Middle East and African countries in the recent years, the Good Practice showcased by Ghent shows great potential of transferability and adaptability to other urban contexts.

Ghent: A city committed to working with other European cities

The city of Ghent has been involved in several URBACT networks, either as partner or lead partner, around topics such as the temporary use of vacant buildings and sites (REFILL) or the improvement of young people’s qualifications in order to avoid early school leaving/drop out (StayTuned).

In 2017, the city has chosen to highlight its good practice on social inclusion of refugees and migrants by answering to the call for Good Practices, therefore widening the scope of the involvement in the programme.

Back in 2015: an answer to the refugees’ reception crisis in Europe

In 2015, the number of applications from refugees to settle in Belgium doubled in just one year and the city decided to tackle this major challenge and to manage it in a very proactive way at local level.

In Belgium, in average 60% of the applicants are recognized as refugees. It seemed therefore essential to Ghent to be pro-active and begin the integration from their arrival in Ghent. The Refugee Task Force, set up to provide a comprehensive and complete package of solutions, had dealt with several issues, such as shelter, housing, education, health and wellbeing, leisure or language, to provide a holistic solution to the newcomers. The official mission is to “provide asylum seekers and refugees easier access to social rights”, exchanging information and experiences between stakeholders.

For example, the refugees, when granted their legal status in Belgium, need to find housing within two months, so the city set up a coordination with partners (professionals and volunteers) to help them in this process and made available ten transit houses for cases in which no solution could be found within these two months. 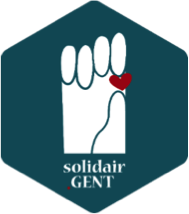 Four key dimensions of Ghent’s success according to URBACT

URBACT Good practices were selected according to four key dimensions, an integrated approach, the participation of inhabitants, the orientation to results and

Here is how these four dimensions show in Ghent’s good practice:

1.  An integrated approach: at the core of Ghent’s strategy is the willingness to provide key services to newcomers from their first day in the city, such as access to housing, to language classes, to work, and so forth;

2.  A participatory approach: the project, set up and coordinated through the Refugee Taskforce, includes the participation of various stakeholders in the city, civil servants, citizens, and NGOs, as an innovative private-public scheme for dealing with integration;

3.  A results oriented initiative: the city aligned different concurring initiatives to help the refugees with housing issues, to practice Dutch or to help them with administrative procedures. It gave good results on the ground. Refugees are finding their way through Ghent society, they know the organizations that can be of help, they have been able to establish a social network, they speak the language and a lot of them are active as volunteers. IN-Gent assigned 150 buddies to asylum seekers to help them with their administration, make sure they get to know Ghent and practice their language skills. The Centre for General Wellbeing assigned 73 housing buddies, who help the refugees to look for a house and have allowed 59 people to find a house. In September 2016, an European Social Fund (ESF) project was started up, the target of this project is to turn volunteer work into a job for 320 asylum seekers. During the summer of 2016 a social-artistic NGO was able to set up volunteer work for 80 asylum seekers to work during the summer festivals in and around Ghent. Because this was such a success, it was turned into a project ‘REFU INTERIM‘

4.  A replicable and transferrable solution: many cities throughout Europe have faced the migration and refugees’ reception crisis. This good practice offers tools and ideas for improving social inclusion of refugees in cities and reduce the negative reactions from local people. 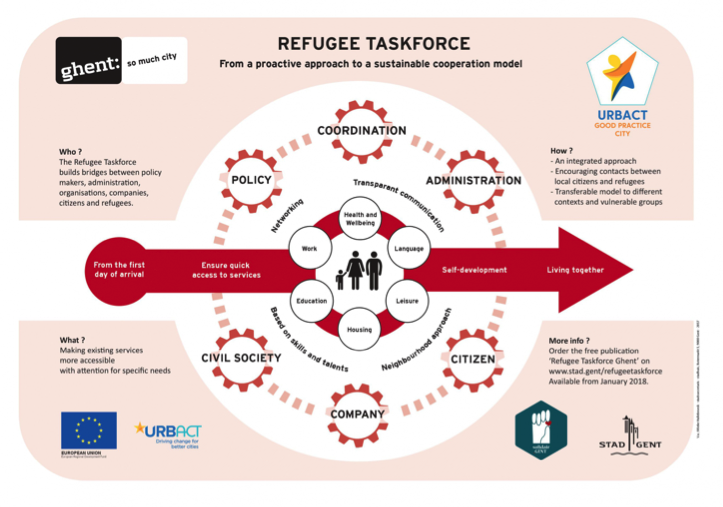 Kathleen Van de Kerckhove, Coordinator of the Refugee Taskforce in the city, supports the idea to build bridges between citizens, NGOs and new comers as well as between the new comers and the city itself (local authorities and administration). From this necessity to « integrate people from day one », the city of Ghent set up a Refugee Taskforce, allowing all stakeholders to get to know each other as soon as possible: residents, new comers, local authorities, NGOs, etc.

To get some perspective about the good practice and the point of view of an expert, I asked Hassan Bousetta, FNRS (Fund for Scientific Research) research associate at the University of Liège and specialist of migrations and urban policies in Belgium, whether the “Refugee Solidarity” initiative could be considered as really innovative and replicable in other urban contexts. 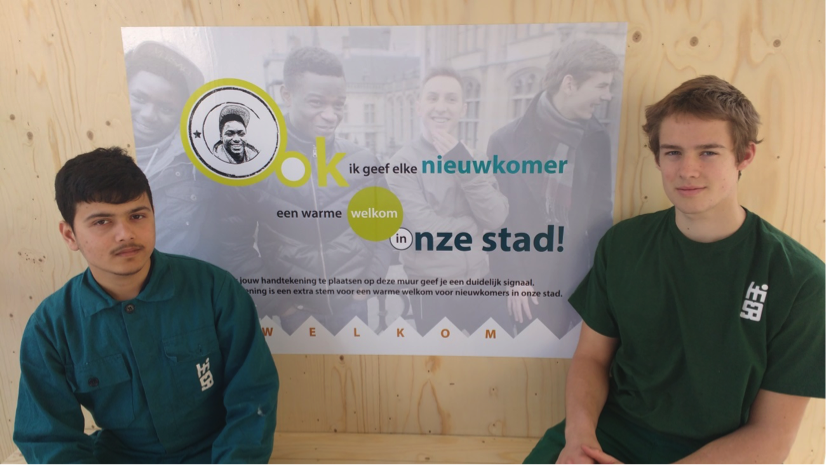 According to Hassan, there are two important strengths to the project:

Firstly, to work from day one on the integration path of the refugees is key to the success of the approach and is backed by scientific evidence[1] that shows the importance of the high level of autonomy acquired by the migrants and refugees in their integration into their new society.

Secondly, the multiagency partnership of the Refugee solidarity initiative, gathering stakeholders from NGOs, citizens and the local administration, is very important to de-compartmentalize silo working habits and provide an integral and holistic approach to the refugees.

Moreover, “the buddies’ initiative is also a quite unique peer-to-peer experiment, which proves very interesting for refugees, allowing to develop their social and relational capital in the city and the Belgian society as a whole”, argues Hassan Bousetta.

In a politically complex and difficult context towards refugees and migrants in Belgium over the last years, the initiative led by Ghent shows the great potential of cities in setting up their own strategy and addressing societal challenges in an innovative way!

Showcasing the Good Practice in Tallinn

The city of Ghent attended the URBACT City Festival in Tallinn (EE) in October 2017, in order to showcase its good practice and meet other cities in Europe. Through the gallery session (with posters from the 97 Good Practices), the discovery sessions (allowing several presentation formats: meet the cities, spotlight on cities and speed networking), there were many opportunities to connect and exchange on the common challenges and goals from cities all over the continent. 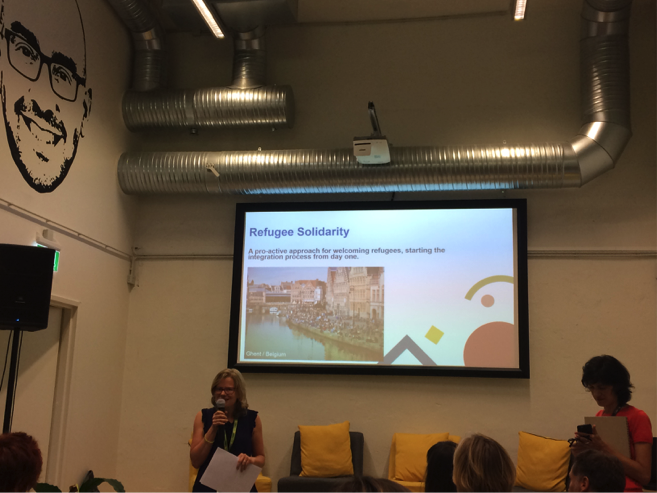 Kathleen argues: « let’s build bridges between the city and the citizens, by getting to know each other from day one », during a discussion at the URBACT City Festival in Tallinn, where she was accompanied by Neelke Vernaillen, political advisor to the Major-Deputy for Elderly, Employment and Poverty reduction, demonstrating therefore the great political support to this innovative social inclusion strategy/initiative, a key determinant of its successful implementation.

At the « diving deeper » session on « Refugees and Migrants » organized during the URBACT City Festival (a good opportunity to get to know better the good practices and asks questions), two other good practices were highlighted (among the five Good Practices tackling migrants and social inclusion): Do not feed the rumour campaign from Amadora (PT) and Finding Places led by Hamburg (DE). While Amadora deployed a campaign aimed at deconstructing stereotypes and prejudices about migrants, Hamburg proposed a methodology for facilitating public participation in the allocation of housing for refugees. The session showed the variety of methods displayed by cities across Europe to offer innovative solutions to the migrants’ and refugees’ crisis.

The next URBACT City Festival will take place in Lisbon on 13 and 14 September 2018.

Let’s hope other cities will benefit from the experience of Ghent and will contribute to spreading innovative, inclusive and sustainable urban solutions for migrants and refugees across Europe!

[1] See for example the studies carried out by a team of researchers, GERME, from the Free University of Brussels, and particularly “La longue et sinueuse route vers l’emploi”, the final report from a research on new migrants and new migrations in Belgium (2010) or the study for Flanders conducted by professors from KULeuven.