Home » Integrated Urban Development » Squatting for cultural use toward commons: The case of Rog factory in Ljubljana

Squatting for cultural use toward commons: The case of Rog factory in Ljubljana

During their 100-150 years of history industrial (or in a broader sense, non-residential) buildings face many challenges. Not only technology may change but whole industries might become outdated and shut down. Moreover there is a spatial factor: a factory built on the periphery of a small settlement might find itself a few decades later in the centre of the expanding city, occupying areas with much higher land value than justified for industrial use.

The problems of such outdated industrial places, the conflicts and their potential solutions have large relevance for many ongoing URBACT Action Planning Networks, such as Second Chance (dealing with re-use of abandoned large buildings), Refill (focusing on temporary use), Sub>urban (exploring new approaches to transition zones of cities), Maps (discussing options for former military sites). For all of these URBACT networks the story of the Rog factory in Ljubljana is interesting, as it highlights most of the key aspects and dilemmas of abandoned industrial places, while also confronting with each other the most important approaches to find solutions.

The 150 years’ history of the (former bike-producing) Rog factory can be summarized as follows.

This is a familiar story: abandoned industrial area with heritage-protected buildings in a good location close to city centre, getting into the cross-roads of conflicting interests of the public sector, private developers and civil organizations. Before going into the details a few pictures help to visualize the case.
Pictures 1-2: The Rog factory is the long building (and the smaller buildings behind it) in the middle of Picture 1, on the river Ljubljanica, one km from the center of Ljubljana. Picture 2 shows the façade facing the river. Sources: tylerarch4431.blogspot.hu and Ivan Tosics 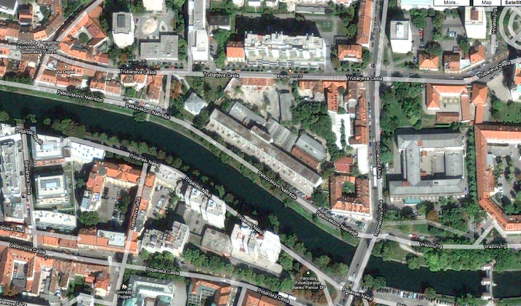 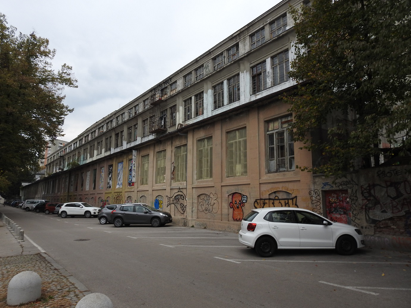 Pictures 3-4: The façade of the Rog factory, with hints to the past (producing bikes). Source: Ivan Tosics 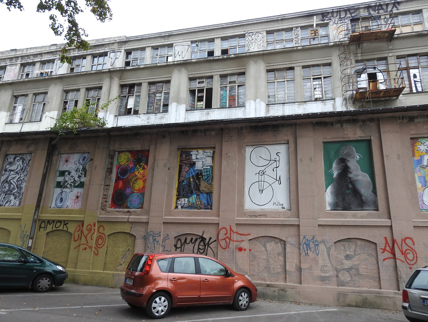 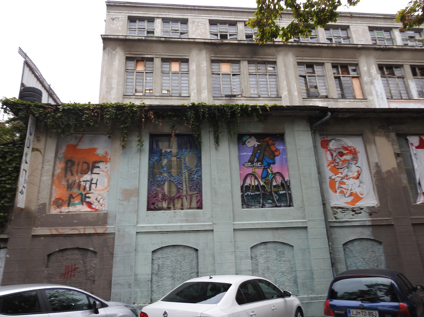 Pictures 5-6: Opposite to the Rog factory a high quality residential development, facing the wall and the entrance to Rog. Source: Ivan Tosics 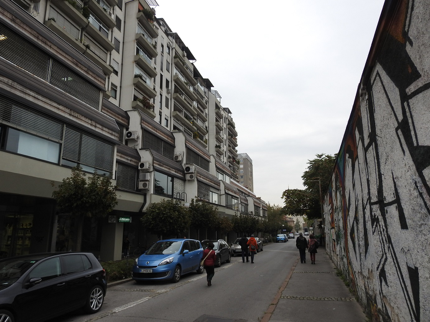 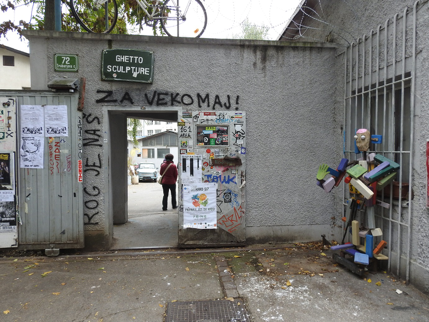 In each of such cases there are (at least) two different stories: how the situation is understood and described from the perspective of the occupant community versus from the viewpoint of the municipality.
The perspective of the occupant community
The story started in March 2006 with a plan for a two-week festival by a coalition of individuals, independent groups and the Faculty of Architecture of University of Ljubljana to showcase the potential uses of the space, which stood empty already for 15 years by that time. After everything was prepared, a day before the announced start of the festival, the municipality announced not to allow the festival to happen. The community decided that despite this they would proceed with the planned activities and instead of just two weeks they would occupy the space until the municipality found a better use of the abandoned factory. From that moment on the former factory has been occupied by the community, keeping it open to the public with the intent to carry out non-profit, non-established activities on its premises. The transition from a factory to a cultural centre was not a classic squatting occupation, but an attempt to create new types of temporary use.
The occupiers met several times with the representatives of the city in 2007, preparing a contract about temporary use of the Rog factory premises. However, when a mutually acceptable contract was finalized, the mayor refused to sign it. From that moment on the occupation continued with no hope to link the premises to the basic infrastructure systems (electricity, water, sewage) of the city. Still today electricity is only available from portable electric generators, the use of which is quite expensive and cumbersome. Not all spaces and collectives have access to electricity and heating is also hugely problematic.
Despite the difficulties, the users secured and cleaned the spaces and established ateliers, workshops, galleries, skate-park, concert hall, recreational facilities and social centre in the factory premises. In the course of these artistic, entertainment and sport activities efforts were taken to include disadvantaged people, migrants and asylum seekers through organizing community kitchen, language courses, etc. Without any help from the municipality the users created one of the main locations of urban culture, critical thinking and political activism in the city. Today, there are around 15 organised collectives and around 15 individuals active in the factory in 30 spaces that are relatively self-sufficient and autonomous. The community is bound together through the assembly which is the main political body following the principle of direct-democracy in decision making.
Pictures 7-8: The inner courtyard with the main building in the back, featuring a famous wall painting. Source: Ivan Tosics 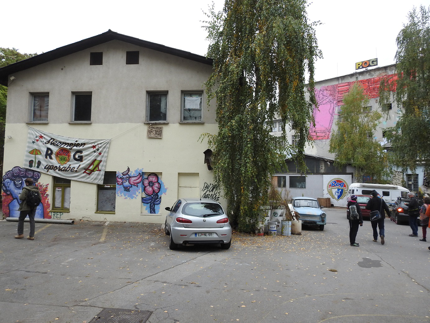 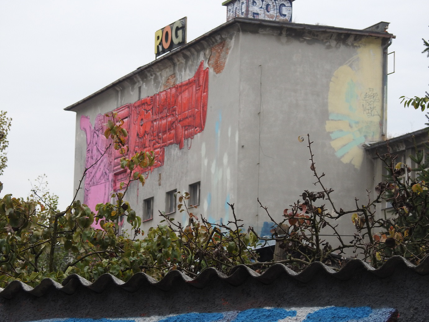 Pictures 9-10: Three of the leading persons of the occupier community explain the story to visitors, continued by a discussion in the ‘social center’. Source: Ivan Tosics 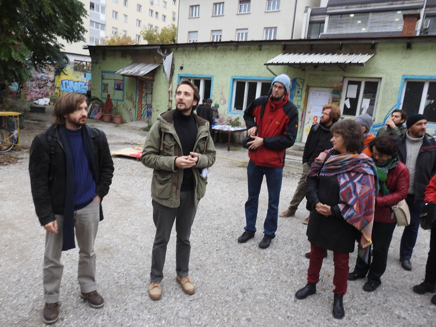 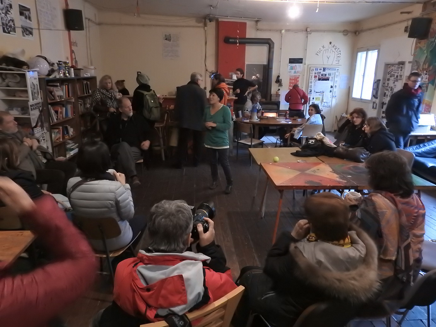 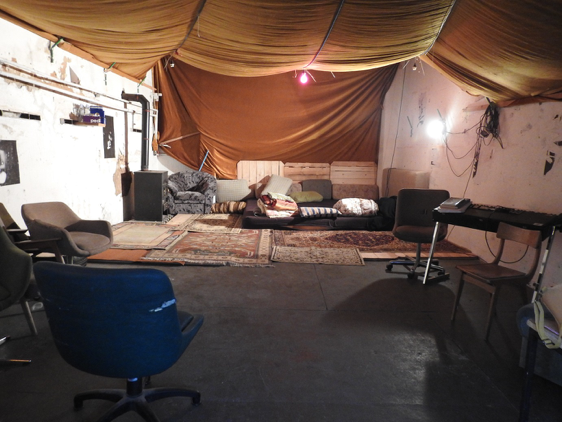 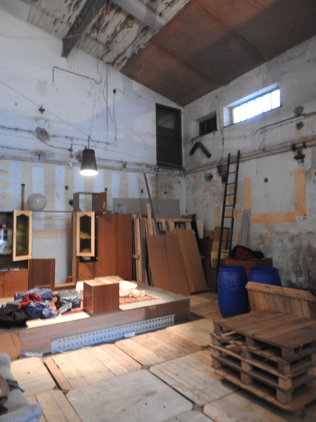 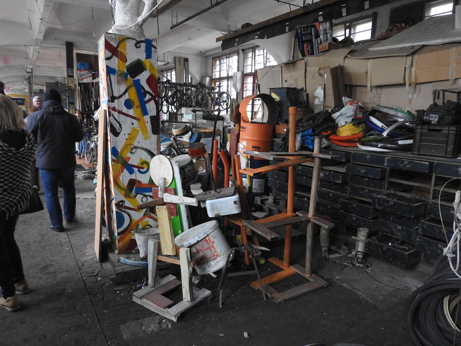 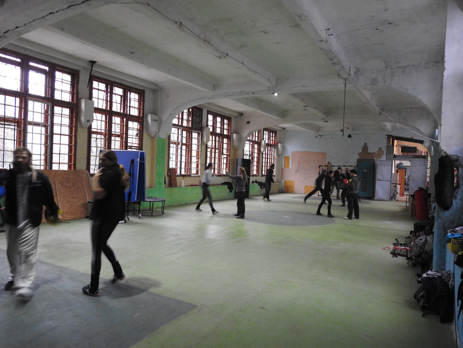 The ideas of the municipality
Since 2007 the municipality developed plans to renovate the spaces and turn them into a hub for contemporary art and creative industries. The main (protected) building has been planned to be transformed into the Rog Contemporary Arts Center with a production center, exhibition spaces, studios and artist-in-residence programmes, art shops, educational spaces, etc. In order to create an attractive area for international artists and tourists the first idea was to establish a public-private partnership, renovating the main factory building, demolishing all other buildings, replacing these with a 40 m high design hotel, high standard apartments and commercial facilities. The public to private ratio was planned to be 20% to 80%.
However, due to the financial crisis the municipality was not able to find any private investors.  Around 2013 the Public Private Partnership plans were dropped and the idea of a publicly financed “centre for architecture, design and visual arts” was emerging, to develop the creative industries and help young designers to enter the labour market. The planned premises for creative industry and culture would be surrounded by a park. Later also the idea for a library and productive spaces was raised and the occupants were offered to be included into the project, to the extent of their need for space.
Pictures 15: One of the entries for the ‘Rog Art Centre’ architectural competition, raised by  Ljubljana Municipality in 2007.  Source: mx-si.net

Submitted by ivan.tosics on 29 November 2016