Tropa Verde: recycling - the gift that keeps on giving

Recycling and the circular economy

The European Union’s fundamental values include the respect of human dignity and human rights, freedom, democracy, equality and the rule of law. Furthermore, looking back in time to the creation of a united Europe (after WWII and further to the creation of the European Coal and Steel Community), I like to bear in mind that the promotion of peace and of economic growth is also among key European values.

Lately, further to different political, economic and migrant crises - Brexit included - many people are arguing about the meaning of European values? I, myself, am not sure I have a clear answer to this question, but am quite convinced that, one of the key differences between Europe and the rest of the world is the awareness of its citizens with respect to the protection of environment and cultural heritage. Within that framework, the different efforts and challenges towards waste management and recycling are also clear examples of real commitment from European citizens and their public and local administrations.

Waste management is typically a local competence and therefore local actions are critical for an effective implementation of the “EU Waste Strategy”. This strategy, which has been developed by different EU regulations and guidelines. It has evolved towards the prevention of waste, the increase of product re-use and the improvement of waste separation as well as recycling in order to reduce the volume of waste and increase the efficiency in the use of resources.

As part of Europe’s effort to transform its economy into a more sustainable one, in January 2018 the European Commission has adopted the so called “Circular Economy Package”. A concrete and ambitious EU Action Plan that  covers the whole cycle: from production and consumption to waste management and the market for secondary raw materials.

Among the package’s targets, several are challenges that directly affect Urban Waste Management (UWM) and, consequently, the citizens and neighbourhoods, among them: 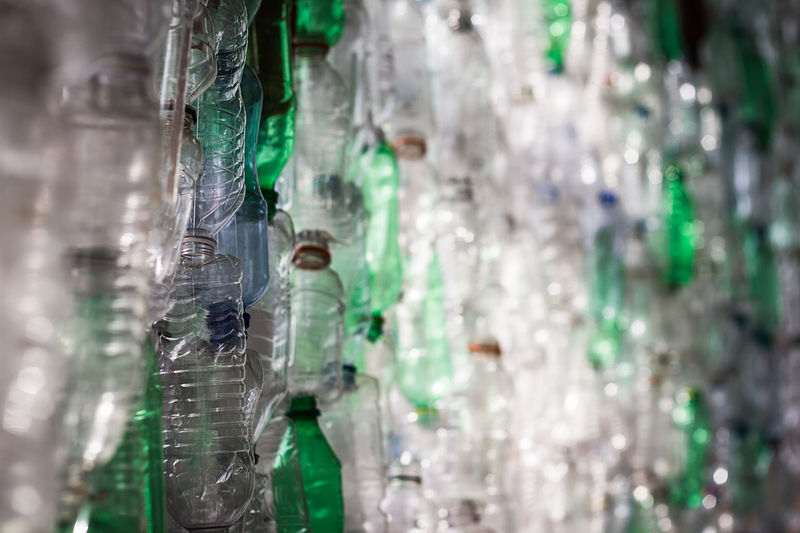 The Tropa Verde Good Practice and experience from Santiago de Compostela (hereafter, “Santiago”) (ES) contributes to reach these common European objectives. The transfer of Good Practices between cities could significantly contribute to reach these goals, especially for some waste streams, such as used cooking oil and electrical and electronic equipment (WEEE).

But what is Tropa Verde, the “St James Way to recycling”?

Like many European cities, Santiago has been committed to improving the environment of its inhabitants and developing green campaigns and strategies for several decades, including through public awareness activities to improve its ratio of recycling. Despite its efforts, in early 2015, the municipality carried out a survey that highlighted, among other conclusions, that:

It was considered that these attitudes damaged the beginning of the recycling chain, promoting low recycling rates and increasing the costs of Urban Waste Management. “Tropa Verde” was born in May 2015 to achieve the goal of creating a more sust

ainable city focussing on optimising the management of waste.

It was awarded the URBACT Good Practice Label in June 2017, and selected in December 2018 together with another 23 Transfer Networks, to be transferred to other European cities.

Santiago then built partnerships (networks) with the district cities of Zugló (HU) and Pavlou Mela (EL), and extended it to the Municipality of Guimarães (PT), the Agglomeration of Opole (PL) and the Metropole of Nice Provence Côte d’Azur (FR).

It is important to highlight that the idea of Tropa Verde was created and promoted first by a local technological spin-off, Teimas. The company’s CEO Miguel Varela would define it as “an online gaming platform that aims to promote recycling and environmental responsibility among the citizens by rewarding good environmental practices”. 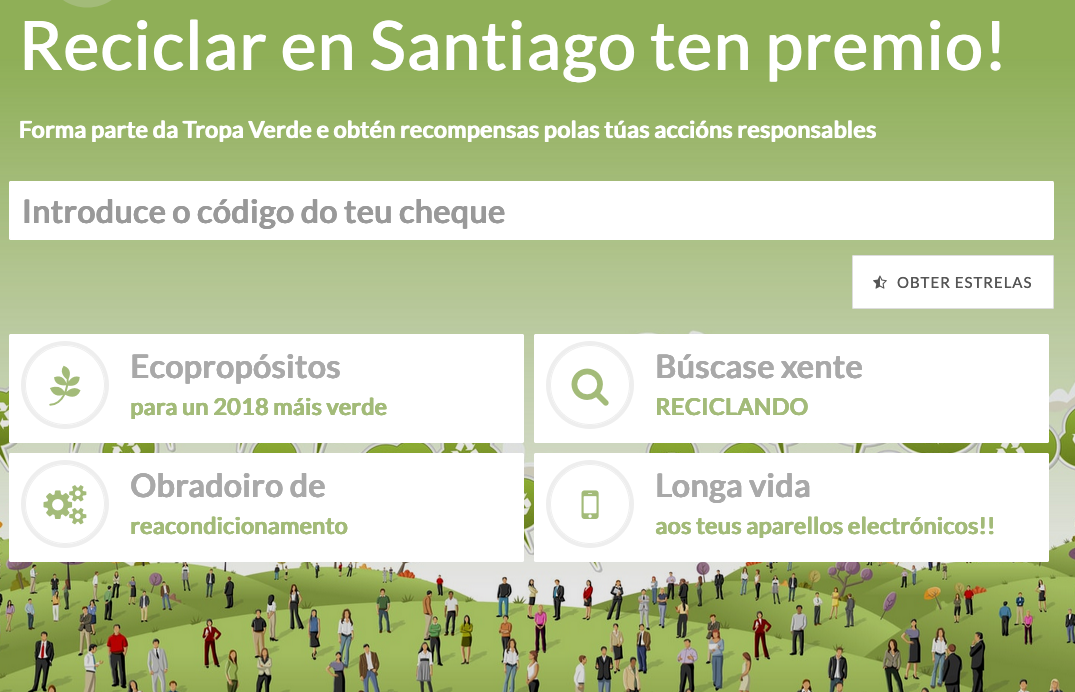 Although technology is essential to implement this Good Practice, from the municipal perspective, Tropa Verde is to be considered as a “civic movement fully committed to sustainability, environmental awareness and the circular economy, where citizens and local partners cooperate”, according to Xan Duro Fernández, Local Councillor for Environment, Coexistence and ICT.

Both definitions are correct, and in fact complementary. In Spanish, “tropa” means “troop” and “verde” means “green”. We are indeed talking about the creation of “green troopers” promoting recycling habits monitored and rewarded through an online platform, where citizens can accumulate “stars” (equivalent to “points”) to be exchanged against vouchers, and use these vouchers for rewards from public and private offers (mostly, municipal services and local retailers, shops and restaurants).

How does it work?

The existing website tropaverde.org connects the three axis necessary to achieve the objective:

Once the citizen/user has registered in the platform, he/she can start to “play and win” (recycle, get stars and use vouchers). But since a human check of what is being recycled is necessary, so far and as far as Santiago is concerned, it has to be underlined that the practice is only possible when the material is deposited in collecting points, where collaborators can control the kind, volume and quantity of waste being recycled.

Santiago has established a growing network of some 30 collaborating “collecting points”, with different levels of collaboration, depending on their storage capacity (e.g. to collect paper, cardboard, batteries, used vegetable oil, plastic caps, etc.). The network includes different kind of partners, such as the 2 official waste collection points, a mobile green point (an adapted vehicle that collects small domestic waste that cannot be recycled in public bins), local NGOs, sports and educational facilities and, above all the 19 socio-cultural centres distributed within the municipal geography.

In Santiago, for each waste delivery, one cheque (either 30 or 50 stars) is given, regardless of the number of waste and type, always respecting the minimum quantities specified in the following table:

For the transferability of this Good Practice, however, it is important to stress that the platform allows a certain flexibility: different rewarding criteria (and kind of waste) can be applied, depending on the necessities and priorities of the promoters.

Finally, the voucher received will include a code that, uploaded on the registered account of the citizen-user, will accumulate the “stars” that can be used as rewards. The kind of rewards available can be checked on the platform, and can vary from a free coffee in a restaurant to a free haircut, free shoe repairs or discounts in a dance academy,  dental treatments - among other gifts offered by over 125 sponsors.

The Municipality itself offers attractive gifts against Tropa Verde “stars” as well, including tickets for its Concert Hall, Theatre or European Film Festival (CinEuropa). But from the launch of the initiative, the most requested gifts are free invitations for 20 environmentally engaged citizens, to sit at the VIP “lounge”, together with the public authorities, and enjoy Santiago’s Apostle’s Fireworks, that take place on the 24th July at night!

… and who knows? Hopefully thanks to the exchanges and learning activities among the Tropa Verde Transfer Network partners, green troopers from Guimarães will get discounts to support their local football team “Vitória” in the stadium thanks to recycling their batteries; citizens from Zugló will have free access to enjoy a relaxing spa session at Szechenyi Thermal Bath against the re-use of furniture; students from Pavlou Mela will collect used olive oil and be invited to the cinema, while kids from Opole will get an entrance to the local zoo thanks to their campaigns to recycle plastic caps, while neighbours from Nice who are alpine skiing aficionados might get a free lift pass to reward their re-use of Electrical and Electronic Equipment Waste…

What we know for sure is that they will all contribute to the European initiative of protecting our environment! 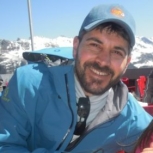