Read time: 5 minutes
The Belgian city of Seraing hosted a virtual meeting on 6 and 8 July - the 2nd Transnational Meeting - involving the four partner cities of the Vilawatt UIA Transfer Mechanism. The gathering was an opportunity to deep dive into Seraing case and focus on the transfer capacities of each of the participating cities to work on the contents and tools that will contribute to a better understanding of the project and to define the next steps to be taken.

The first day of the meeting allowed us to have a close-up view of the host city. The French-speaking city of Seraing, located in the Liège province, Wallonia, explained its assets and particularities, in view of the transfer of the Innovative Practice, and presented its energy related projects which are most relevant for the Vilawatt partnership.

Bénédicte Borckmans, from Eriges -the city’s autonomous municipal authority in charge of coordinating and managing the urban regeneration and revitalization plan- and Vilawatt Project Coordinator, presented, namely the long term -2040- strategic development Master Plan of the Seraing Industrial Valley. This urban requalification plan has the objective to move from an industrial city model to one which is smarter and more modern, serving all citizens, retaining the population, offering new job opportunities, and providing the city with the assets and tools for a future energy transition linked the housing and energy efficiency actions.

One of the objectives of the city’ urban requalification master plan is to encourage private investment in housing rehabilitation through public investment as a driver. Under this purpose, Seraing, in collaboration with Eriges, initiated the PRIMO project. Gwendoline Framba, Architect and Technical Advisor explained that it consists of the public purchase of houses in the most impoverished districts of the city, in order to renovate them implementing retrofitting measures such as insulation of walls, floors, roofs and windows, and upgrading heating and ventilation systems, intending to encourage private owners to follow suit.

During the meeting AGILIS (Agence de Gestion d’Intendence et the Location Social) was also presented. A tool created by the Walloon region for building retrofitting and assistance to owners renting their properties. Denis Sibille, its Director, explained that the agency -which federates the Public Inter-municipal Real Estate Agency, the Social Real Estate Agency and the Conciergerie- has developed joint projects aimed at meeting the right to decent housing and offering a compound of services to private and public owners to manage rents and real estate projects, including housing renovation and quality improvement of buildings.

The 2nd transnational meeting gave us also the opportunity to know about AREBS, the Economic Redevelopment Agency’s new Energy Community project in Seraing. Philippe Judonc, its Project manager, commented how the AREBS’ association is leading the Sustainable Action Plan of the city (SECAP) and has initiated a public tender for the first Energy Community project in Seraing.

Finally, other Seraing Projects, relevant for Vilawatt scope of work were introduced:

All this Belgian expertise will undoubtedly help the other cities to address some of the pillars of the Vilawatt transfer project. 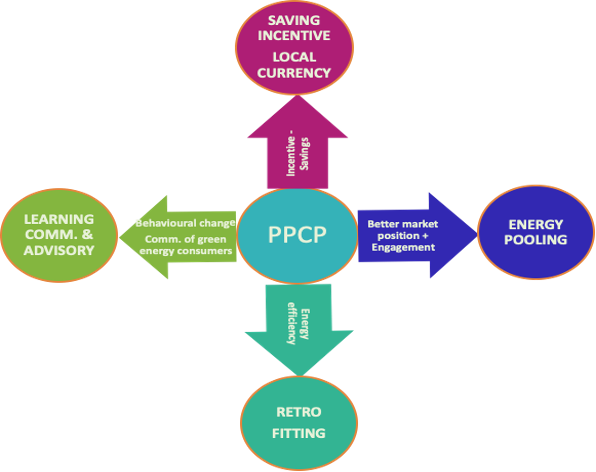 On the second day of the meeting, all member cities also had the opportunity to assess the initial situation of their respective cities and how to approach the first steps in the process of transferring the Vilawatt good practice.

The city of Nagykanizsa, located in the county of Zala (Hungary), believes that the local currency pillar would be the most difficult to implement, while the other pillars (liof the Vilawatt project would be feasible. Much emphasis was also placed on sharing valuable experiences with the other partners, as well as on the importance of citizen engagement and cultural exchange.

Trikala, a city in north-eastern Thessaly (Greece), also stressed, like Nagykanizsa, the difficulty of creating the local currency and the public-private consortium (PPCP), and pointed out the importance of building renovation, although it is more favourable to do so in publicly owned buildings. Finally, the city emphasized the strong potential of the university community as a catalyst to foster commitment to the project.

Viladecans, located in the Barcelona metropolitan area (Spain) explained that Vilawatt's objective in its city - which is leading the transfer process - is to develop the future strategic lines to make it sustainable over time beyond public funding. The Energy Communities are one of the aspects that the City is currently exploring.

The two days helped identify the potential of each city by analysing the difficulties and opportunities to implement each of the pillars of the Vilawatt project. The partner cities shared a common point of view on the difficulty to encourage private owners to renovate their homes without public subsidies and to tackle the creation of the public-private consortium (PPCP), both of which will require more support and learning. They also highlighted the importance of local energy communities in supporting the economic sustainability of the project and improving stakeholder participation.

All partners agree that the transfer process, with the professional advice of experts, will allow customizing the cases, according to the specifications of each city, to face the next milestones of the process.

A new image to connect us

During the meeting, the logo and slogan ‘Vilawatt: Empowering people through energy transition’ that will accompany this transfer process were also chosen by vote. A design and claim that conveys the idea of sustainability through participation and connection between citizens.

Would you like to know more about the 2nd Transnational Meeting?

Find here the Report TM2 with the main topics and conclusions.

Submitted by Miriam Martín on 16 September 2021