Economic development, with GDP as the main marker, has had more and more influence on our lives in general and on the way we work in particular. However, the principles guiding economic development as such, promoted very strongly by the liberal thinkers since the war, mainly from the USA Chicago school, have not passed the test of time, as shown in recent times with the banking crisis of 2008 and presently the COVID-19 pandemic. At the same time, the inhabitants of planet Earth have realized that the ongoing individualistic and competitive development proposed by this economic model is not sustainable in the short or medium term. As the Paris Agreements on climate change have shown, the way we live and work has to evolve within the limits of what the planet can support, whilst at the same time the planet’s inhabitants have needs and requirements, which need to be satisfied: health, food, useful occupations etc. One of the most mainstream answers to this is the model of the doughnut economy constructed and now popularised by Kate Raworth [1].

In a very interesting deconstruction of many popularized theories about the humankind, Rutger Bregman suggests that we are rather cooperating beings, than those seen as competing,[2] and goes on to show how numerous theories about us have been constructed more on what people wanted to hear and know, than on what the different findings actually found. This positive approach to the humankind, as basically co-operators, co-helpers, co-designers and co-doers fits in rather well to many contemporary ideas leading to the new creation of common areas, common actions and most importantly common values.

"Previously, these [immaterial values] were the only thing we had. We rejected those values to follow the path of Western capitalism. However, now, in Poland, as in the rest of Europe, we have realised that happiness does not rest on the ownership of objects. Instead, we want to invest our energies in activities, meeting and exchanging with other people – so we are now going back to those old values." [3]

Andrzej Bojanowski’s statement from 2015 goes to the heart of the problem, seen from a post-communist country perspective. However, the whole idea of functioning differently from the highly competitive market economy is getting more and more popular in many parts of the world, as slowly consumerism is being pushed out towards planet-saving actions, zero waste, zero plastic, transition cities, self-sufficiency in energy and a maximum of other products, co-design of cities with and on the basis of inhabitants, and of course economic models such as circular or social and solidarity economies. 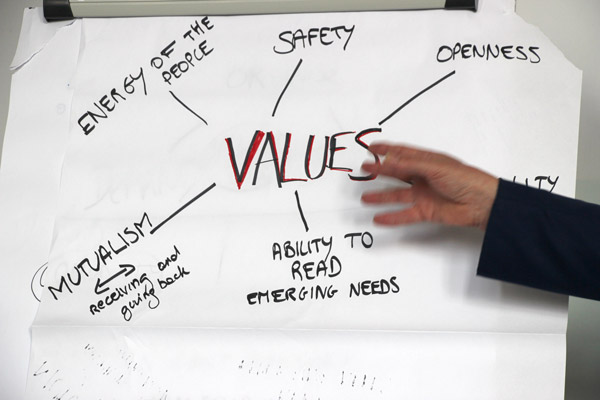 From 95% of newcomers to “Solidarność”

The II World War emptied Gdańsk of 95% of its original population and the city walls welcomed people expatriated from the east, from central Poland etc. This new Gdańsk took over many of the traits of the old Gdańsk, as it is well known that “walls transmit memories”. In this same city, nearly half a century later a well-known movement came to be which was called Solidarność, which at its height had 10 million members and brought down the communist soviet governed regime.

Should one day an analysis be made of the use of the commons, in all its definitions, from the distribution of houses after the war to the efforts to rebuild the destroyed city, through to the incredible solidarity of the shipyard workers and all those who supported them, the concept would be well enriched.

However, the commons did rather disappear as capitalism swept over Poland, seen by almost all as the remedy for the dreary autocratic communist times.

“There are risks everywhere in politics, but if you have faith, you should go against the wind” [4]

Paweł Adamowicz, mayor for 17 years in Gdańsk, took risks and one of them was to change the approach of the city administration from a top-down perspective to much more participation of city residents. He employed persons coming from the NGO sector and actually required the 2030 city strategy to be built on values and hopes that citizens prepared. This progressive change of city management allowed Ewa Kamińska, the vice-mayor for social policy at the time (coming from the NGO sector), to invite a group of city workers and others to work out some initial principles or values, which they shared. These were trust, participation, honesty, responsibility, being closer to the citizen, individual and institutional openness, harmonisation, social cohesion and long-term perspectives. About 15 persons of different horizons discussed them and added their understanding to these concepts, achieving in this way a “common glue” on the basis of which functioning within the city administration and with its partners became simpler.

This is just one example of creating commons in the sense of common values. Without sharing at least part of the understanding of these values, the thinking and actions put into place become disjointed as they lack the “common glue” mentioned above.

However, it must not be assumed that we have the same, or even a similar understanding of these, or other concepts, as the majority of us think. This understanding must be actively shared in a process, which brings out the true meanings. Methodically this process requires a neutral moderator who can pull out the true meanings and allow the group to share fairly and directly. Often there are many concepts (around 20) which a group would like to discuss, but after about five or six the common understanding starts to prevail. This process takes around 3 times 3 hours and requires quite a lot of work on the part of the moderator, to resay, rewrite and get the acceptance of the group. It is always wise not to discuss these common concepts in a general way, but to choose an existing challenge, narrow it down spatially and in time, and share on the concepts in the most pragmatic way possible. 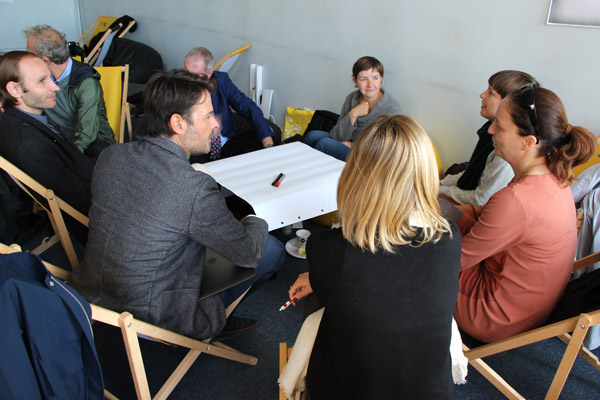 In the UK, in almost every village there is a “common”, even in the Greater London borough of Wimbledon. These commons are physical spaces, wherein the medieval ages everyone has the right to graze their livestock. This space was common and, in most cases, up till now has been saved from all forms of development (factory or housing building etc). This law has therefore protected these common square meters over the centuries. So, the conclusion can be made that for the new commons of today a legal framework is also necessary. If we take the example of co-decision making between politicians, technicians, inhabitants, and even the private sector or the knowledge sector, in most EU countries there is a lack of legal structuring, allowing such co-decisions to be enforced. Most often it is the legal representative body (local authority) that has to accept a proposition coming from such informal bodies, which limits the empowerment of truly participative bodies and processes.

In some instances, this hurdle has been overcome:

Turin has come to the conclusion that such initiatives must have a legal cover and has developed a “pact of collaboration” which has been voted by the local authority and with the help of ANCI, the association of Italian cities, has promoted it countrywide, with a strong support of the European Union. It is exactly this sort of recognition, or legal status, which it is now necessary to build in all EU countries, to support local initiatives and co-design elements of the city or other innovations which desperately need a legal status.

Many politicians appear to have an a priori wary approach to participative methods, as they worry that they will lose their decision-making powers. However, the participation of inhabitants, where it is well organized and real, on the contrary, strengthens the powers of decision-makers. This requires quite clear rules and regulations about who does what, and at what moment elected members have the appropriate scope to take decisions. It is becoming very clear in the last few years, that participative processes are making headway, that they bring more and more people into the area of political debate and they widen the realization of what the political scene is all about. It is of utmost importance to recognize this evolution because, as says prof. E. Manzini of Milan Politechnic, cities are being made bottom-up more and more and the role of the political sphere is to recognize these initiatives and give them the political status which they need. This positions the political class in an important role of guidance and verification, but less of doing and performing. This implies a whole new role for decision-makers – new ways of working and thinking, being mentors, training themselves and others, developing the capacity and experience of talking to inhabitants on an equal level etc.

Turin has also brought in its own legislation on the commons, perceiving that without giving some space to this area, participation will have many obstacles on its way. This gives well-intentioned inhabitants, longstanding residents, or recently arrived migrants, the chance to invest themselves in the local area, building communities, improving the visual aspects of their area, or influencing the local policies as they have more leeway to express themselves. Such a situation empowers local people, but does it imply that there is a threat to the political class? No, as dealing with well-informed and motivated inhabitants simply changes the way of working of politicians and the technical staff working for them. It implies, as we discovered in Gdansk while creating the “common glue”, that an inhabitant is not a problem: she/he is the very richness of the city, who has ideas and wants to make progress. So, welcoming her/him to collaborate, knowing how to listen to them, wanting to fulfil their wishes if it’s possible, looking for alternative solutions when it’s not, those are the areas, where the contemporary city will be in a win-win situation! Both the politician and the civil servant take on the role of positive brokers. This changes from the older version of local authorities, who decide on their own, as the politicians can decide due to the fact that they have been elected.

Such a brokerage role, allows everybody in a given city to better understand what is going on and be able to participate in it. This implies and when our inhabitant comes through the door and suggests something, we must be open to new suggestions (we don’t, therefore, have all the answers!) and we must have a capacity to invite the owner(s) of the proposition to co-develop it, to co-manage its creation and to be co-responsible. Therefore, common concepts and a common legal framework are absolutely necessary for every modern, vibrant and sustainable city.

[2] “Homo Sapiens, people are better than you think”: Rutger Bregman

[3] Quote from one of the previous vice-mayors of Gdańsk A. Bojanowski in „Initial steps towards Responsibility Sharing” M. Bonneau: URBACT II capitalization 2015

Submitted by Gregorio Turolla on 22 January 2021