The Citizen Committee of the La Rochelle Territory Zero Carbon project: How to build trust?

On January 25, La Rochelle Urban Community presented to the Global Goals for Cities partners its ‘La Rochelle Territory Zero Carbon’ (LRTZC) project towards 2040, highlighting the following main characteristics and innovations : a shared and multilevel governance, an evaluation and financing tool 'the Carbon Cooperative', and a citizen co-construction approach through the establishment of a Citizen Committee.

A question raised by Caroline from our partner city, Trim, challenged us : how do you manage to build trust with this Citizens' Committee? Here are some pieces of answers…

The LRTZC Citizen Committee: the genesis

From April 6 to May 31, 2021, a call for volunteers was launched via a communication campaign on the community territory, in order to solicit applications to constitute a representative sample of the diversity of the population; according to criteria of parity of sex, age, residence and professional activity.

256 volunteers with various profiles applied. These were anonymized and sorted according to the different criteria.

An anonymous draw validated by a bailiff then designated the 30 volunteers selected. Here is the composition of the Citizens' Committee following the draw:
• 15 Men / 15 Women
• 15 inhabitants of the urban center / 15 inhabitants of peri-urban and rural areas
• 10 between 16 and 29 years old / 10 between 30 and 49 years old and 10 over 50 years old
• 2 people who already have civic involvement in the territory
• 2 representatives by type of occupation at least
• 2 Farmers
• 3 craftsmen / traders / business leaders
• 6 others without professional activity (including 4 students)
• 6 people with a managerial job
• 5 employees (including two nurses)
• 2 factory workers
• 4 intermediate professions
• 2 retirees

Alongside the five founding members (Urban Community, City, University, Great Harbour, Atlantech district) and a Scientific Committee, the mission of the members of the Citizen Committee is:
• to provide citizen expertise in this transition project,
• to give opinions upon request from the founding members of the project (referral)
• to be proactive on project actions (self-referral)
• to work on the very evolution of the composition and operating rules of the Committee.

“What do we mean by “citizen expertise?”

The notion of citizen expertise is also called, knowledge of use, local knowledge, field knowledge, i.e. the knowledge that a citizen or a collective has of his immediate and daily environment, based on experience and proximity.

Citizen expertise feeds the deliberation. To unfold, deliberation needs citizen expertise, contradictory information and moments of personal introspection. The final objective is to create an informed opinion to lead to a collective opinion that is thought out and shared by all. »

Building trust with the Citizen Committees : some key principles

Between September and December 2021, the Citizens' Committee met twice over one day in order to build skills on the LRTZC project and allow its members to take better ownership of their mandate. At the beginning of 2022, the Monitoring Committee (MC) announced its first referral to the Citizens' Committee: a reflection on the establishment of a new axis in the project (possibility of rewriting and proposal of new operations in the project). In order to provide citizen and collective expertise to this request, the Committee will meet several times during the first quarter, thus providing a response to the MC in June 2022.

At all of its meetings, the organization team of the LRTZC Committee strives to create a real relationship of trust and transparency with its members. The notion of trust is one of the prerequisites in the establishment and effectiveness of citizen participation processes.

• The peaceful cooperation charter:
The members of the Citizens' Committee and the Consortium of the La Rochelle Territory Zero Carbon project (founding members) reciprocally undertake to ensure the smooth running of this citizen participation through a calm cooperation charter drawn up and signed jointly.

•  Taking their opinion into account:
The group also worked on writing the process for transmitting opinions and information between the various project bodies. Concretely: “How and when is their opinion heard by the MC ? How does the MC lower its decision? ". The Committee wishes to be sure that its opinion will be taken into account and that their proposals will be useful and heard.

• Work with technicians and experts:
In such a system, it is necessary for citizens to be supported by technicians who work directly on the project, allowing the proposed opinion to be in line with the technical orientations of the project. Being in contact with the technicians of the LRTZC project allows the members of the Committee to project themselves on the operationality of their opinion, and to reassure them in the consideration of their future proposals. 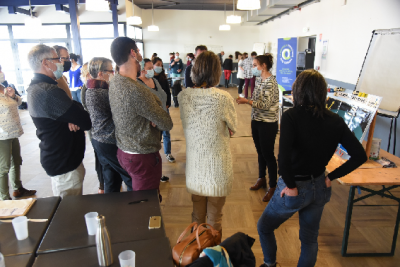 • Transparency and flexibility:
The Citizens' Committee is an experiment. None of the members of the LRTZC Project Consortium has ever had to set up such a citizen process. The organization team listens to Committee members’ feedback and their feelings in order to reconfigure and adjust meeting formats with them. The work process follows a framework but it is not fixed. The organization team is available by phone and by email (dedicated address + instant messaging) daily, in order to quickly provide additional information.

Overall, the members of the CC were concerned about “distrust” vis-à-vis the MC and the consideration of their opinion. It is a long-term job and a fair balance to be found between a working environment and flexibility, in a spirit of continuous improvement.