Debating the future of Schiedam

The future of the city of Schiedam is a recurring topic in the city council and the executive board and, of course, also in the city. These views and discussions have been reflected in the city vision for some time now.

The document is a “living document”. It is the starting point for the efforts of the municipality. Major changes of tasks in recent years make an update urgent again. Changes of legislation in the field of spatial planning emphasize this necessity. At the same time, the city vision also offers opportunities for greater involvement of the city, for more cooperation between residents, businesses, social organizations and the municipality.

Reassessment
The municipal Executive Board of Schiedam has commissioned a reassessment of the city vision. It has to be done in close contact with the city. The mayor and the vice-mayor for public spaces are the political representatives for this assignment. We formed a project group that plans and coordinates the production of the city vision. The project group is supported by a focus group (in which all municipal disciplines participated), the agenda group and the action team. The focus group is responsible for the development of the city vision and its included strategic policy. The agenda group was the linking pin to the municipal management. The action team held talks with the city at various locations. The municipal research centre played an important role. They designed the surveys and questions for discussions. During the process, they provided the various teams with data and analysis for policy making.

Schiedam is growing, DO YOU GROW?
The action team has started a campaign “Schiedam is growing, DO YOU GROW?” On a daily basis, people came into contact with citizens, entrepreneurs and social organizations at markets, shopping centres, schools, events and meetings. We placed mailboxes all over the city, offering to residents the possibility to post their ideas about the future of Schiedam.

The reach of the campaign
In addition to these numerous meetings, various digital surveys were conducted and people were able to express their views on a special website The future of Schiedam . The surveys were thematic (mobility / urban vision / quality of life & safety). They also targeted young people. All in all, the campaign has had a broad reach of 14,000 persons. We received more than sufficient responses to the various surveys (13,000) with a good representation of the specific target groups (young people, elderly, businesses and multicultural society).

Outcomes
The common thread in the results of the various forms of consultation is the importance attached to fighting crime and improving security. In the discussions, the most important topic was prioritizing the perceived insecurity in the city and neighborhoods. On the other hand, security is seen as an important quality for the future of Schiedam. Residents and visitors should feel safe and at ease. These themes were identified as important for the future:

Children’s city council
The children's city council reached out to the elder children in primary education. After a year, they presented their findings with advice about the future. In this 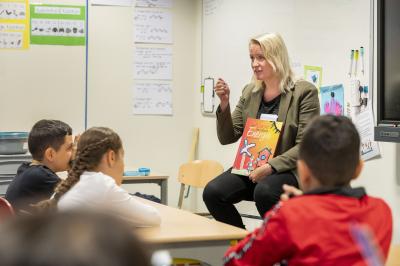 advice the possibility to meet each other is key. For children connecting with people, also with the elderly, is an important quality for the future.

Responses on website
Citizens of Schiedam were invited to express their views on the website in response to the question “If I may determine the future of Schiedam then ...” Here too, a lot of attention is paid to safety and to the city centre. Another topic mentioned is housing for young people.

Now we are using the results for the agenda for Schiedam 2030. This provides a basis for the URBACT Local Group and the Integrated Action Plan.