Since the first moment of the adhesion of the Municipality of Santa Maria da Feira to the European program URBACT, the local group of the Active Citizens project privileges experimentation in the field, with the preparation and implementation of small-scale actions, which allow testing and measuring results to improve or reject ideas or concepts. It is true that, by their nature, these actions have the legitimacy to fail, but they can also prove to be powerful and effective tools for citizen participation. 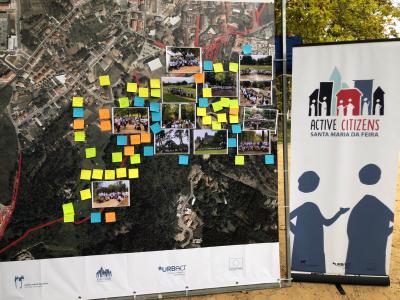 n July 2021, the local group of the Active Citizens project carried out the first small-scale action in Feirense territory, after a month of ULG preparation, to respond to the challenge of developing a culture of community participation and promoting environmental awareness. in the spa town of Caldas de S. Jorge, specifically in the Amália Rodrigues Park and on the trails along the Uíma River.

“We want to know your opinion” was the motto of this action, implemented with the aim of listening and recording the opinion of citizens who, voluntarily and randomly, shared and debated the most worrying environmental problems and, at the same time, received useful information, promoting of environmentally conscious behaviours, in addition to reflecting on individual acts and their consequences for the environment and the planet.

This direct contact with citizens resulted in evidence: there is no low culture of participation in Santa Maria da Feira, but it is essential to innovate in the way of approaching citizens, meeting them in the places they usually visit. Lack of civility, sharing of responsibilities, need for articulation with local authorities and continuous awareness of environmental issues were the most mentioned topics. 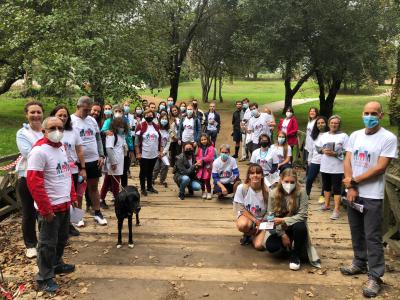 Through this guided safari tour, citizens had the opportunity to focus their attention on details, express their opinions on non-consensual topics, with particular emphasis on abandoned public facilities, private properties in disrepair, buildings and volumes that clash with nature, among others.

This experimentation action effectively potentiated the participation of citizens in the urban planning of the city, qualified and reinforced information on the strengths and weaknesses of this space of enjoyment, also pointing out multiple paths for a better enjoyment of the City Park by the community and stimulating critical thinking about this emblematic natural and urban space.

When faced with the challenges launched by the local group, the participants of this first guided safari tour felt effectively involved and ended up proposing solutions for dilapidated spaces, scarcity of parking, volumetric of new buildings and unused equipment.

The third small-scale action is scheduled for April’22 and aims to design a digital platform for participatory democracy. ULG members will be invited to think about and propose the contents and functionality of this platform, in partnership with a private entity that will provide information on the different possibilities, having as a starting point the contributions of citizens, regarding the target audience, objective of the website, contents and relevance to users.

The frankly positive results of the first two small-scale actions motivated the Municipality of Santa Maria da Feira to look for ways of financing and partnerships for the execution of new actions, in the short, medium and long term.

Submitted by Barbara Gautherie on 09/05/2022
See all articles