On March 8 we celebrate UN International Women’s Day- a time to reflect on progress made, to call for change and to celebrate acts of courage and determination by ordinary women who have played an extraordinary role in the history of their countries and communities.

URBACT is taking part in these celebrations by featuring a series of articles about women’s leadership in European cities on the governance webpage this month.

In upcoming items we will explore initiatives in women’s equality in cities and hear the views of some current urban leaders. The results of a panel debate on the impact of female leadership in cities at the Women of the World Festival in London will also be published.

We start with a review of data on the levels of female political representation at city level in in Europe.

More than two thirds of the European population lives in cities. The way they are designed, planned and led impacts our everyday existence. As the sphere of governance closest to the people, local authorities are well placed to combat the persistence and reproduction of inequalities, and to promote a truly equal society. Cities have the competences to undertake concrete actions in favour of equality of women and men, both directly and in cooperation with local stakeholders.

Equality in the EU Treaties

Equality between women and men is enshrined in the EU Treaties and the EU Charter of Fundamental Rights as a fundamental principle of the European Union (EU). Ensuring gender equality is one of the EU's main objectives and tasks. Despite significant progress during the last decades thanks to regulatory pressure, gender inequalities persist in leadership positions and the pace of change is slow in many Member States.

The facts of the matter

It is not a straightforward task to find or indeed collect comparable data on female representation, due to different government structures at community, local, regional levels. There is a tendency to monitor and recognise female political office and achievement at international and national levels, less so the city level. The availability and dissemination of data on the gender ratio in national parliaments across countries and over time (for instance through the website of the InterParliamentary Union) has enabled researchers to study this issue and has provided policy-makers and interest groups with current figures and trends of the situation. However, the picture is different when it comes to elected decision-makers on the sub-national level.

What data we do have shows an unbalanced picture a cross the EU member states.

So what is the current status of gender balance in EU city leadership?

Several surveys and reports listed here give us an idea.

There is a slightly better gender balance amongst politicians at regional and local level than at national level. Across the EU, women account for nearly a third (32%) of members of regional assemblies (2012 data) and the same share of local (usually municipal) councils (2011 data) compared to 27% in national parliaments (2013 data) (Figure 19). Balanced representation (considered to be at least 40% of each gender) has been achieved in four countries (France, Sweden, Finland and Spain) at regional level but only in one, Sweden, at local level. At the other end of the scale, in regional assemblies men heavily outnumber women in Hungary (91%), Italy (87%), Romania (85%), Slovakia (84%), Greece (83%) and the Czech Republic (81%). There are fewer extreme imbalances in local authorities with Ireland and Greece being the only EU countries in which women account for less than one in five representatives. The share of women in regional assemblies was already 30% in 2004 and has risen only 2 percentage points since.

In 2013 Aksel Sundström, of the University of Gothenburg published the  Women’s Local Political Representation within 30 European Countries:

The map of EU, included in the report, gives an interesting picture of the share of female councillors although again the author insists it is often difficult to record patterns as a result of varying institutional structures, lack of data collection or availability and varying responsibilities of local councillors. 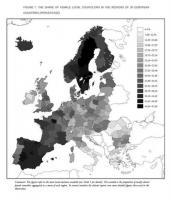 It would seem that, as in other sectors, there is a glass ceiling, meaning that the share of women reaching the most senior positions in local politics is still low. Much of the research shows that women are often very active in grass roots, community level actions, but this fails to translate into significant numbers reaching leadership positions such as portfolio holders, mayors and deputy mayors. The same barriers are cited, such as lack of support to enable women to have a job, a family and become politically active and persistently male culture and bias in political parties and systems.

CEMR’s review on Women in Local Politics in Europe: Figures from 34 European Countries of CEMR’s membership in 2008 gives a comprehensive view, also of female mayors in 31 European countries.The range is from 3 to 30% but in the majority of member states it is well below 20%.

So- the scorecard might say ‘must do better!’ More effort is still needed to harness the talent of the EU’s female political talent to enable them to bring their voices to urban leadership.

In the next features we will report on gender equality initiatives in cities across Europe, and present the perspectives of female leaders.

Thanks to Jenna Norman for additonal research.