The Pacts of Collaboration in Turin

The situation two year after Co-City

One year after the approval of the Regulation on collaborative governance of urban commons in Turin, the UIA CO-CITY Project has begun with the aim of experimenting with the instrument of the pact of collaboration.

The Municipality, through a public notice, asked citizens and associations to propose activities for the shared management of buildings, schools, and public spaces.

The public consultation to collect proposals for collaboration had a very positive response: 120 proposals arrived from associations, informal groups, citizens, and individual citizens also thanks to work on the territory carried out by the Neighborhood Houses, which accompanied the people at every stage.

The Municipality has not carried out other public consultation and currently the activation of new proposals takes place mainly through the direct initiative of civic subjects. For this reason, constant communication and information work on the possibility of participating in public life is essential to raise awareness among citizens and volunteers that already operate on the territory.

From e-mail to the Pact
The numbers
The urban commons office collects all contacts and collaboration proposals in a database, collecting all the information from the procedural process to the signing of the agreement and its management. 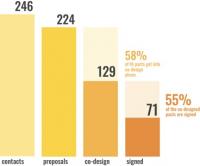 The timing of the procedure
During the CO-CITY project, the average time elapsed between the collaboration proposal and the signing was very high. Since it was an experimental project the group slowed down due to some critical issues, above all the distribution of responsibilities between civic subjects and public administrators in safety and risk prevention. That issue has engaged the City Services - advocacy, risk prevention, occupational safety, and others - for almost a year to develop a clear and shared document between the signatories of the pacts.

The new Regulation n. 391 of 2020 on urban commons, introduces a distinction between ordinary pacts, which have a simplified procedure, and non-ordinary pacts. Currently, the average time to reach the signing of the pact has decreased. 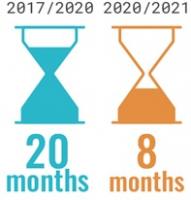 In evaluating the timing, it is necessary to consider the technical times due to the monthly frequency of the Technical Board, which examines the new proposals, and the peremptory deadline of 60 days to respond to the proposers after a favorable opinion of the technical table. There are also variable times to consider, including the organization of the co-designing meetings and the drafting and approval of administrative documents.

How many pacts
The pacts signed are about 70 and are distributed throughout the city, with a prevalence in the suburbs.

A crucial moment in the government of the pact of collaboration is the monitoring activity, a moment of discussion to evaluate the health of the pacts, and to find shared solutions to the critical issues that emerged.

The Groups
Most of the pacts of Collaboration concern green areas and public space, while the agreements relating to buildings and schools derive from the public consultation of CO-CITY.

Civic subjects are mainly composed by associations, social cooperatives, committees, and formal groups, often including citizens and individual citizens. Although informal groups generally prefer to form associations, some of them chose instead to remain free in the composition and management of the group.

Given the prevalence of care and management of public space, more than half of the pacts are in charge of the Local Districts and the Public Green Area.

The first Monitoring after the lockdown due to the health emergency highlighted the desire to continue the activities, even if with fewer people. A year later, we saw an increase in participation in both ordinary activities and organized events.

A new concept of public space has made the places already lived in and cared for by the inhabitants attractive and welcoming: schools use them for outdoor activities, students as study rooms, and associations promote activities and workshops.
In this context, the concept of public space as a urban commons assumes fundamental importance. This theme is at the center of the most recent reflections on the construction of public policies and the reconquest of collective spaces by the citizens, as resources for their own city and protagonists of a cultural change.

In conclusion, the results of the monitoring activities show great vitality but also some critical issues that must be addressed systematically:

What to do
●    Activation of new collaboration proposals
●    Management of pacts in progress
●    Training on agreements and regulations - internal and external
●    Specific training - green, communication addressed to the signatories of the pacts.