The main idea and desired outcome of the co-creation process within RiConnect project includes developing assumptions of integrated actions suitable for the Integrated Action Plan Area in cooperation between different groups of stakeholders. The pandemic situation caused a lot of problems determining the way of working on co-creating specific solutions of the IAP. Here is KMA’s experience in the co-creation process.

Since 2019 we have already experienced difficulties due to the current pandemic situation. Some challenges that we faced include organization of remote work, moving meetings to virtual space and lack of opportunities for a face-to-face exchange of information. It has also given an impulse to test a number of tools that have significantly facilitated the implementation of online meetings of the URBACT Local Group within the co-creation process. What kind of tools have been used during the co-creation process?

Meetings within URBACT Local Group framework were structured by 2 processes:

Co-creation workshops included working on assumptions of project vision and goals, SWOT analysis of the IAP Area, sourcing past memories about the IAP Area, developing actions connected with identified project areas, and prioritization.

This kind of meetings requires the use of several available solutions that allow working on different devices, including mobile ones. During the meetings there were used easy-to-use tools which allowed us to create a digital space for collaboration e.g. virtual whiteboard. The main advantage of this kind of tools is their simplicity - when conducting a meeting, each participant can easily use them. A limited number of functions allows keeping notes legible. Several functions are available: something to write with (a marker, a pencil, a pen), several colours to choose from, a panel to move boxes and cards, and the option to add a picture - all the functions allow to note and visualize information in a simple way. And what’s the most important – it’s very helpful in focusing mainly on substantial things connected with co-creating assumptions of the IAP. Participants can rather think of rather How to improve our neighbourhood, not How to use this tool. Obviously, there were some other digital tools and solutions which turned up to be helpful in conducting workshops and co-creation process in this format: on-line surveys, PowerPoint presentations, Goals and Grid analysis, How-Now-Pow-Wow template.

The crucial part of the co-creating process includes Charette Workshop. The workshop was preceded by thorough analytical preparation and a participatory process with a multi-stage stakeholder engagement. Through the online questionnaire the project stakeholders could decide on the topics and directions of all sessions and initially define dominant preferences and needs. During the preparations for the Charrette, the contractor collected knowledge and opinions in various ways – extending the possibility of expressing views by interested parties both during meetings and telephone conversations, as well as using digital tools.

The four-day workshop included research walk with the stakeholders through the IAP Area, listening to different voices concerning various places and the entire area as a place of preparing the Functional and Spatial Concept of the Skawina Mobility Hub with its surroundings. Besides, the Charette involved several thematic and design sessions, sequentially and in parallel. The participants represented various groups: officials, town planners, public transport planners and managers, developers, residents, community workers, and specialists in various fields related to the local development. The irreplaceable value of the workshop was getting to know and confronting at the same place and time different perspectives and opinions on a very wide range of topics – from public services, transport, security, to the advantages and deficiencies of public spaces, recreational infrastructure, greenery, and architectural aesthetics. All these aspects affect the quality of life in the city and are an integrated part of actions included in the IAP. 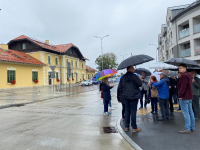 The four-day workshop included reflecting on the possibilities of improving the quality of space, defining the directions of the necessary changes, confirming the main conclusions coming from previous stages of the co-creation process. The applied approach consisted of several participatory tools, including open discussion, brainstorming, addressing needs, weighing priorities, choosing between options and testing solutions through joint sketching and working on a model. One of the important elements of the process was the collective mapping of critical places, collective memory, points of importance, gaps, conflicts, and spatial barriers. The culminating moment of each of four design sessions was the joint composing spatial interventions on a map. This element of creative involvement enabled an integrated approach to the complex urban issues discussed during thematic and design sessions. Thanks to this, it was possible to achieve the main goal, which was an agreement on the common vision of the IAP Area with the wide range of stakeholders and testing assumptions developed during the project. 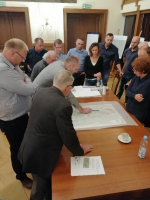 In general, the process of developing the Integrated Action Plan assumptions within all of ULG levels (Core Group, Local Level, Supra-local Level, Charette workshop – Small-Scale Action) included several stages, according to advancement of the project:

All of these stages included relevant tools, used depending on planned goals of the meeting:

The Co-creation process conducted within the RiConnect project was a great opportunity to think about the development of the IAP Area in a different, more sustainable, multisectoral and human-oriented way. All stages of the process and used tools were oriented on not jumping to conclusions and working on a common vision with a wide range of stakeholders.