The city of Ozalj was the co-host of the 4th Transnational Meeting which was held virtually between 24-26 November 2021 along with Manresa and Glasgow. Our main theme was Meaningful participation and co-creation and each co-host city shared best practices and introduced other cities to local customs.

To help others achieve Agenda 2030 and Sustainable Development Goals, the city of Ozalj shared best practices (The Youth Council of the City of Ozalj) and a project that is currently being implemented (Social Center Ozalj), which are closely related.

The aim of the project Social Center Ozalj is to strengthen the public-civil partnership and the practice of community participation in management and decision-making by expanding the range of social, cultural, educational and economic facilities and services initiated or already implemented in the local community center and strengthening the capacity of local CSOs. As part of the project, the Social Center in Ozalj is arranged and equipped. A wide range of social, cultural, educational and economic facilities are launched for the citizens of Ozalj and the surrounding municipalities. Many workshops are held, for example dance workshops of folk dance and singing, dialect poetry, knitting, art colonies, health performances, first aid, firefighting presentations, STEM playrooms, electronics and robotics workshops, discussions on the tourist position of Ozalj, those for farmers, and workshops dedicated to young people. 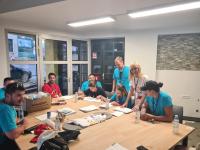 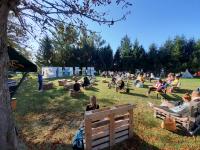 The Youth Council of the City of Ozalj was established as an advisory body to the City Council that promotes and advocates for the rights, needs and interests of young people in the city area. It has 7 members and the same number of deputies. Members of the Youth Council of the City of Ozalj and their deputies are elected by the City Council for a 3-year term. The Council participates in the work of the City Council by giving opinions, proposals and recommendations on issues and topics of interest to young people, initiating decisions, programs and other acts relevant to improving the position of young people in the City, discussing certain issues and also resolving them. The work program of the Youth Council is to participate in the creation and monitoring of the implementation of the local action program for youth, consulting with youth organizations on topics relevant to youth. The Mayor of the City of Ozalj, as needed, and at least every three months, holds a joint meeting with the Youth Council, where they discuss all issues of interest to young people and on cooperation.

The Youth Council of the City of Ozalj, in cooperation with the Social Center Ozalj, organized a workshop to get to know better and get closer to young people. Also, members of the Youth Council participated in participatory-deliberative workshops, where they conducted surveys on the needs of the citizens of Ozalj. 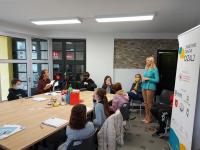 The Youth Council of Ozalj, with the support of the Tourist Board of the Kupa area, and under the baton of the City of Ozalj, revived the favorite summer action of the Ozalj Sports Games. These were the first Games after a break of 13 years and they proved to be a complete success. Competitions in football, border guard, rowing, running and especially in the tug of war, gathered old and young, both on the battlefields and in the audience. There were 13 teams and over 400 competitors from 16 local committees that participated in this year's Games.

As a participant in the URBACT III program, we are excited to exchange practises, learn from our peers, build capacities towards the localization process of the SDGs and develop tools for localizing the SDGs and all for the benefit of developing solutions for sustainable urban development.