Due to the financial crisis the heavily indebted public actors are not able any more to launch large-scale programmes to handle difficult environmental problems. Thus they have to find new, innovative ways, experiment with more flexible environmental standards and regulations.

Once upon a time in European cities the public sector had enough money to carry out large-scale programmes to improve the environment. Such programmes were usually connected to strict standards and regulations regarding the level of improvement and the use of the improved areas.

One of the many examples on large-scale brownfield improvement programme is the C-Mine project in the Belgian city of Genk, converting a coal-mine site into creative center for business innovation and entrepreneurship. This project was at the middle of the 2000s jointly financed by the Flemish government and the city of Genk. 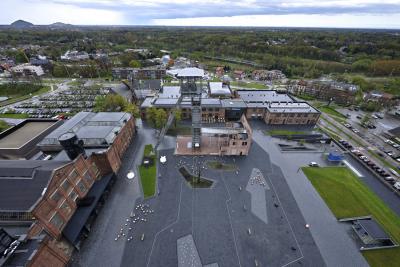 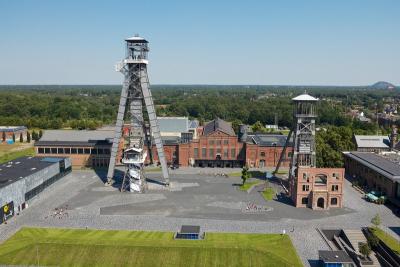 With the financial crisis (also) these opportunities were largely gone. The heavily indebted public actors are usually unable any more to launch large-scale programmes, thus they have to find new, innovative approaches and partners to handle environmental problems. One of the potential innovations is to experiment with more flexible environmental standards and regulations in order to initiate bottom-up processes and to involve the population into the improvement of the environment.

“From control to co-evolution” – this was the topic of the 2014 AESOP Congress in Utrecht. One of the “Mobile Tracks” (full day visits), led by Zef Hemel from the Amsterdam Planning Department, aimed to illustrate this new approach on the example of Amsterdam North.

The Northern waterfront of Amsterdam – although not far from the city centre – is the “wrong side” of the Ij-river, which was always industrial area. In 1984 the Dutch Ship Building industry closed down and the ownership of land was transferred to the municipality. There were many plans developed for market lead modernist development with large cruise ships – in reality, however nothing happened for two decades, the city has ‘forgotten’ this area.

Since the mid 2000s, the Urban Planning Department of Amsterdam has decided to go towards a new planning approach that is more open and less expert-driven, aiming for a step-by-step change, with temporary uses and festivals trying to find out new uses and users…This move from control to co-evolution opened up totally new perspectives in the use of the area, illustrated below with three examples.

The NDSM area is close to the river, where a large food producing industry functions nearby with a lot of noise and smell, thus no residential functions are allowed. Pictures 1 and 2 were taken in a large industrial building of the ship industry which is now used by 260 artists. They created their studios, formed a coalition and started even to rent out spaces. In that way they feel themselves as part of the process of change. There are many discussions going on with the open-minded planners (less with the financial department which wants to radically increase the rents). Artists argue for more flexibiliy in allowing people to live here, at least temporarily. Planners resist so far as this is an active harbour area and the importance of harbours seems to increase again. If introducing residential functions this would mean no possibilities for harbour activities in this area and the harbour would have to go to green-field areas… thus difficult choices have to be taken within the framework of sustainability. 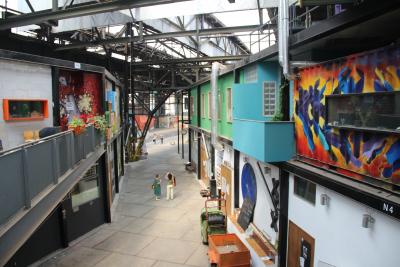 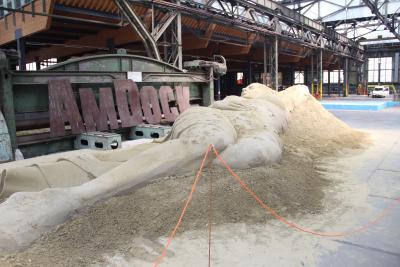 The Buiksloterham area is 1 km further away where residential function is allowed but plots are very polluted. The original plans aimed for several hundreds of new housing units but this did not function as there was no interest from the side of large developers – who would like to live here? After some discussions the city decided to follow a totally different idea, offering the area plot by plot for development. The planning department started to discuss possible developments with groups of families, organized by architects. In this pilot area for self-building people are not allowed to buy more than 2 plots (in this way large developers are excluded). There are 50 year long lease contracts signed for the plots, construction has to be started within 1,5 years and finished within 1,5 years afterwards. The basic rule is that everyone can build what they want within their plot. Inhabitants have also a say how the streets should be designed and practice shows that they aim for totally different streets as it would have been planned by the city. After long discussions compromises have to be reached taking into account the already installed amenities. One of the groups asked for the possibility to bring a caravan as office place and put up benches for weekly discussions. Another resident has built the green building (Picture 3) within 2 weeks with an atelier on the groundfloor and also a place to where a furgon can come in. The advertisement (Picture 4) calls for registering for a co-housing project. 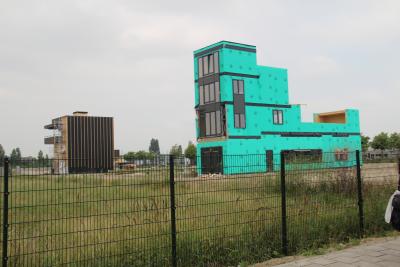 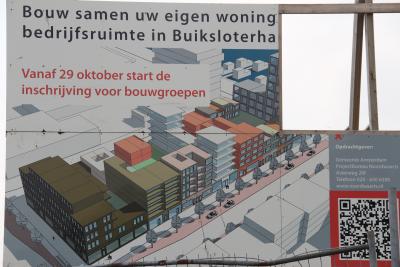 De Ceuvel is a workplace for creative and social enterprises. The site is so heavily polluted that under “normal” planning rules it could not be used for any human-related purposes. As there are no chances in the near future for the costly cleaning of the site, a decision was taken about a 10-year lease from the Municipality of Amsterdam to a group which won a tender to turn the site into a regenerative urban place. To avoid the problem of pollution imaginatively retrofitted houseboats are placed on the site, linked by a winding bamboo walkway and surrounded by an undulating landscape of soil-cleaning plants. Each of the upgraded boats will house offices, ateliers, or workshops for creative and social enterprises. The plan also includes a public restaurant, café, and a bed & breakfast. De Ceuvel is a totally self-sufficient insofar it relies on solar technology for its heat and electricity, green roofs and water collection systems will supply water and its sanitation systems will extract energy, nutrients and water from on-site waste and be used for food production. It will also serve as a showcase and living laboratory for new, green technologies to the broader public. Probably the most unusual is the use of vegetation to create a bio diverse environment (phytoremediation) so that when the boats pull away in 10 years, the land will be left clean(er) and more valuable as it was at the beginning. 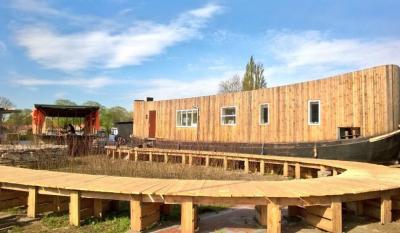 All the three examples show very innovative approaches to handle difficult problems with which the public sector can not do anything with traditional methods, especially under the present financial conditions. The unprecedented flexibility from the side of the municipality, however, is not without contradictions. One of the debated aspects is about the future diversity of the Amsterdam North area. In order to assure social mix the Dutch planning system requires a minimum of 30% share of social housing in any new built areas above a certain size. This rule is not implemented in the pilot areas in Northern Amsterdam and it is clear that these special projects attract very special people, mainly highly educated intellectuals. It could be argued that in this originally very low status area the flexible approach of the municipality creates a kind of „publicly initiated gentrification”. This can be accepted up to a given extent, as currently this is the cheapest area of Amsterdam – people who want better environment go to other parts of the city and not even the poor families aspire to live here.

Federico Savini and Sebastian Dembski, two political scientists who follow closely the changes in this part of Amsterdam, consider the case as a post-crisis liberal approach to achieve changes under very difficult circumstances. The first results can already be seen: some parts of the Northern brownfield area became by today the coolest place in the city (the Shell tower is a DJ school and incubator… a previous Crane has been turned into a hotel with 3 rooms for 300 eur/night…).  It is now a delicate task for planners and politicians to steer further development in such a way which assures the interest from the side of pioneers (who are very much needed to handle the difficult problems) but avoids the change of the whole area into a gentrified high-end neighbourhood.

The new, flexible and innovative planning practices are also analysed and discussed in URBACT projects. In the Re-Block final conference in Iasi the importance of flexible governance and the notion of Public-Private-People-Partnership (PPPP) have been emphasized by Pietro Elisei. Many of the cities of the Re-Block network mentioned the need for innovative methods to involve minorities and disadvantaged groups into decision-making, especially in service provision. Cities and neighbourhoods in difficulty have to develop their governance innovation in order to move from hierarchical attitudes to enabling, partnership initiating approaches.

As a practical example the case of Leipzig has been shown in the conference by Stefan Geiss. The Grünau prefabricated housing estate had once 85 thousand residents. Quick shrinkage of the area has led to 26% vacancy rate, as a result of which over 7.700 flats had to be demolished. Around the end of the 2000s the city changed its strategy, recognizing that in economically weaker cities it is important to give to people new hopes based on the “advantages of being poor“ (low real estate prices, empty spaces and buildings…). People have to be approached and made interested to think about new solutions. Along this philosophy innovative governance attempts were launched:

According to the Leipzig experience enough time should be assured to achieve that local groups become co-developers. In this process cheaper, even interim solutions have to be allowed instead of ‘perfect’ and expensive solutions. As Thomas Knorr-Siedow emphasized, the city might give up total control… for example the Leipzig Wächterhäuser (Guard Houses) scheme is an attempt to hand over empty building to groups of people without knowing exactly what will happen. Furthermore, as most land and buildings are owned by private actors, the city has little chances to intervene directly and flexibility remains the main thing the city can decide about. As a result of the new ways of planning and thinking and the political courage to allow development from below in Leipzig, today even from Berlin many young people move to Leipzig where life is cheaper and opportunities for informality (to get empty houses for free, to start urban gardening in empty areas) are higher.

In the TUTUR final conference in Rome the local politician Giovanni Caudo summarized very clearly the new philosophy of District III of Rome: in crisis times flexibility is the best way for local municipalities to re-capitalize under-used assets. Temporary use of empty spaces should also be considered as important tool to mobilize citizens – it could help to achieve that everyone gets access to a minimal working space where some useful activity can be carried out (e.g. co-working). Flexible labour market would also need flexibility of working space.