Panevėžys is the 5th biggest city of Lithuania and home to almost 93,000 inhabitants. It is located at the same distance to the Capital Vilnius as to Latvia’s Capital Riga. The city structure sees a divide between residential areas and areas for work, local economy and leisure to a larger extend. Consequently, traffic volumes between these areas are high and concentrate to more than half of all trips on car traffic. Often enough the built environment is not equipped for this level of car traffic. Residential areas see car parking misusing public space of any kind and hot spots outside of regulated parking areas meet similar situations, too. Areas neighbouring the parking management zone in the very centre face an additional load of motorists avoid the centre to access unlimited parking options.

One of the hot spots for traffic is the city’s polyclinic hospital with three more health centres in its direct vicinity. Located just north of the city centre across the river Nevėžis, the area is a central destination for employees, visitors and patients alike. Streets connecting to the polyclinic are either the large motorway A10 with little parking and little option to stop for drop-offs either. Or the small street “A. Jakšto Street.” located just between the river and the polyclinic. Parking options are at hand here, but much to little to cater for the demand of people that access the hospital. Specifically for the small A. Jakšto Street., this results in cars parked outside of designated parking areas while options to place more parking spaces are not at hand due to the spatial configuration at hand: of buildings to the East and the river valley including small recreational spaces at the West.

This situation leaves little options for the City of Panevėžys, since adding more parking spaces is hardly possible and not in the intention of the city. Ultimately, and on the contrary, Panevėžys aims within its Integrated Action Plan to

One option as present in these objectives is to shift modal choices of trips connected to the polyclinic from car use to other transport modes. Therefore, Panevėžys decided pilot a bus connection that connects the areas around Kniaudiškių St. with the polyclinic. This area is a major housing area located South-West of the of the city centre and the piloted service connects through the centre to the hospital. The piloted bus line 1E has been installed in April 2021. 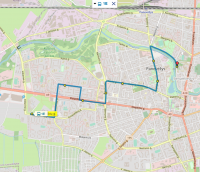 A survey done to evaluate necessity and acceptance of the piloted bus service tells that more than 200 passengers make use of it each day. Users of the bus line 1E were a mix of staff and visitors to the hospital. Most survey respondents (94%) see a definite necessity for the service and about every 3 out of four persons think that such services impact people’s intention to use public transport more often positively. Further recommendations were to make use of low- or no-emitting vehicles, to increase the frequency of the service running on bus line 1E and to add similar services to other areas of the town as well as. The latter proposal directly answers to one of the pilot intentions of the city of Panevėžys: to find out, if the bus service is used at all and as well if similar services connecting other parts of the town with main traffic destinations should be tested as well.

Today, the bus line 1E has been turned to a permanent service. The success story of the pilot is visible in further interest of the polyclinic for more public transport services to the main residential areas of the city. Right now, Panevėžys, is following up its own and now also the hospital’s intention to add services by conducting surveys with inhabitants of further population centres. And then, given respective positive feedback, to run more tests for new bus lines.