Check out the updated EU principles of sustainable urban development – and how URBACT contributed.

In this article, we examine some of the key elements of the New Leipzig Charter and the way in which URBACT – along with other partners – was able to contribute its experience, expertise and the voice of Europe’s cities into the updating of this important political declaration for the future of urban policy in the EU.

Why renew the original Leipzig Charter?

The core messages of the original Leipzig Charter around the need to promote integrated and sustainable urban development have been inspiring urban policy in Europe since they were adopted in 2007. Whilst these principles remain as valid as ever, the context in which they are implemented has been changing rapidly.

Major global trends are directly impacting towns and cities across Europe, threatening to increase disparities in our societies. The NLC identifies “climate change, the loss of biodiversity, resource scarcity, migration movements, demographic change, pandemics and rapidly changing economies” as well as the “digital technologies” which are offering both benefits and challenges as they “drastically transform” our societies.

The Covid pandemic has obviously been a major disruptor in 2020, but the view of the German Presidency has been that this shock has only reinforced the urgency of the foreseen principles for helping cities to become more resilient and adaptive to sudden changes. Social distancing will (hopefully) not be around for the next decade, but the need for integrated, participatory and place-based approaches to developing urban resilience and quality of life will be.

The original Leipzig Charter on Sustainable European Cities was adopted under the German Presidency of 2007.

The overarching political context of Europe’s urban policies is also increasingly prioritising sustainability, including the European Commission’s Green Deal, which aims to make Europe the world’s first climate-neutral continent, the Paris Agreement, the New Urban Agenda of the United Nations, and the UN’s SDG 11 on making cities inclusive, safe, resilient and sustainable.

In this broad context, the New Leipzig Charter has a clear and practical aim: to provide “a policy framework to envision and realise these European and global agreements at the urban scale” in the EU.

The transformative power of cities

A key feature of the New Leipzig Charter is that it promotes the idea of urban policy for the common good. It emphasises “the transformative power of cities” to respond to the modern-day challenges facing cities in each of their social, environmental and economic dimensions.

The New Leipzig Charter was adopted on 30 November 2020 under the German Presidency of the EU.

The NLC thus highlights three forms of the transformative city which can be harnessed in Europe to enhance people’s quality of life:

Delivering on the transformative power of just, green and productive cities requires implementation of key principles of good governance. The New Leipzig Charter defines these as being: 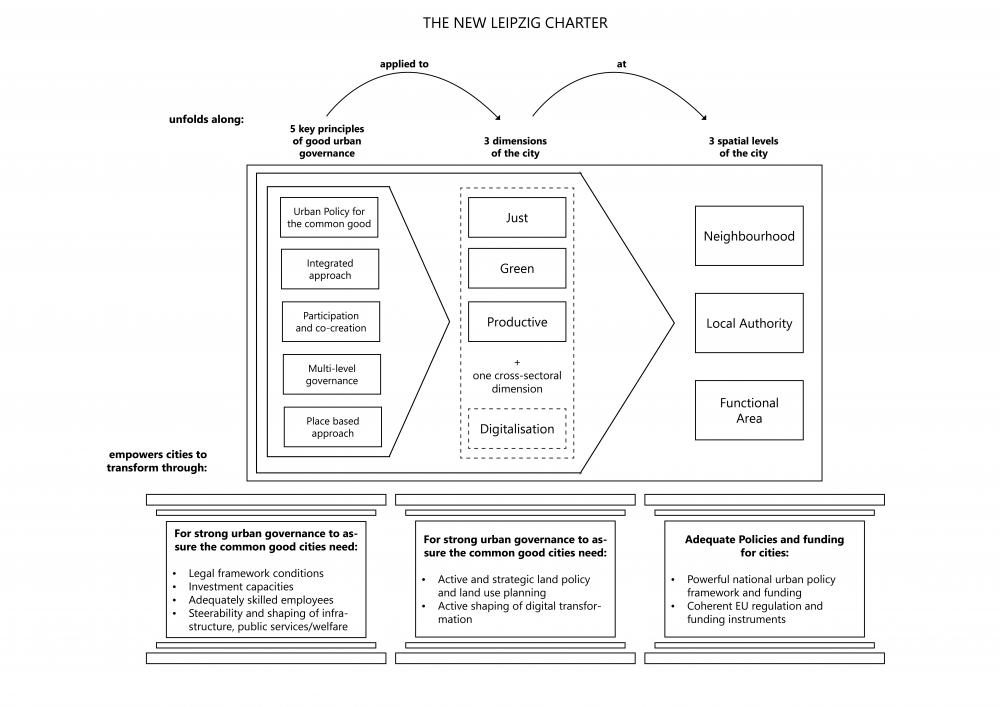 The 2020 German Presidency has provided a visualisation of the logic of the New Leipzig Charter principles.

URBACT was actively involved as a partner of the German Presidency in developing the refreshed principles of the New Leipzig Charter. Notably, URBACT organised a series of four City Labs on key principles of sustainable urban development to help inform the NLC:

A series of URBACT City Labs 2018-2020 provided input into the drafting of the New Leipzig Charter.

Organised in collaboration with Eurocities and Urban Innovative Actions (UIA), the four URBACT City Labs drew on the experience of hundreds of cities, allowing direct exchanges with representatives of the German Presidency, the European Commission and the national level. All together, we reflected on the theory and practice of each principle in turn, highlighting aspects that the New Leipzig Charter should take into account based on the real-life experience of cities.

The links between these City Labs and the principles of the NLC are clear to see. For example, the first City Lab on ‘participation’ highlighted that we needed a stronger framework for promoting new ways of participation. This is reflected in the NLC encouraging “co-creation and co-design in cooperation with inhabitants, civil society networks, community organisations and private entreprises”.

Equally, the NLC text built on the fourth and final City Lab on ‘place-based approaches’ in explicitly recognising that, even at the ‘city level’, delivering just, green and productive cities requires consideration of appropriate measures at three spatial levels. Local authorities are responsible for local urban development. However urban challenges are often more pronounced at neighbourhood level, requiring localised innovations. At the same time, sustainable urban development takes place within a regional or metropolitan context that relies on a complex network of functional interdependencies.

URBACT was not only instrumental in developing the refreshed Leipzig Charter with the German Presidency, but is explicitly recognised as a key partner for continuing to build the capacity of Europe’s cities to deliver on these principles and illustrate their implementation at local level.

An accompanying note by the Ministers responsible for urban matters sets out a number of key aspects for Implementing the New Leipzig Charter, with particular reference to next steps for the Urban Agenda of the EU and multi-level governance. This document recognises the valuable contribution of URBACT on two separate occasions.

Firstly, the note states that “Knowledge exchange as well as capacity and knowledge building should be supported by the Cohesion Policy programmes and initiatives, in particular by the European Urban Initiative and the URBACT programme.”

Secondly, it encourages local and regional authorities to continue to “reinforce city-to-city collaboration at the European level, including for example through the URBACT programme”.

The challenges are great, but Europe’s cities have the power to deliver on the ambitions of the New Leipzig Charter. Through the future URBACT IV Programme, we look forward to continuing to support Europe’s cities – both small and large – with thematic expertise, opportunities for peer learning, and the complete set of tools and resources they need to deliver integrated approaches based on multi-level governance, stakeholder participation, and place-based approaches.

The new URBACT toolbox will continue to support cities with the tools and resources they need to implement the principles of the New Leipzig Charter.

URBACT will continue both to identify and share good practices that illustrate implementation of the NLC and to feed lessons and messages from cities into the EU policy agenda, notably through ongoing participation in the Urban Agenda for the European Union.

We invite you to join us on this exciting journey for the future of Europe’s cities!

Check out the URBACT summary of the German Presidency’s Europe’s Cities Fit for Future Conference – as well as the recordings of the webinar sessions from September 2020.

Finally, don’t forget to check out the URBACT toolbox of tools and resources for cities on how to design and implement local policies in an integrated and participative way.